Eviction Crisis Will Put NYC's Right To Counsel To The Test 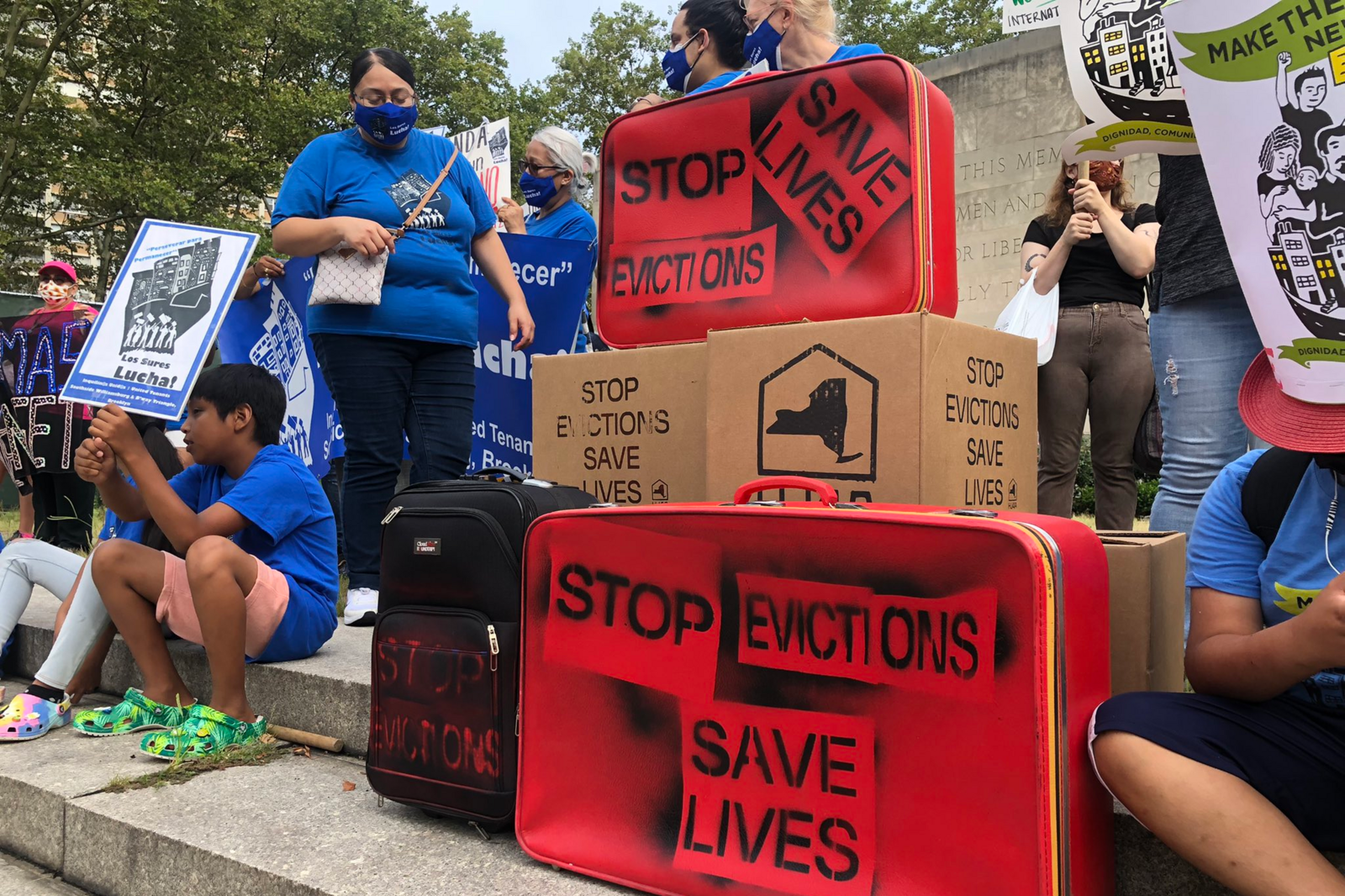 Tenants demand eviction protections and improvements to a state-run rental assistance program at a rally in Brooklyn on August 19. (Emma Whitford | Law360)


New York City has significantly increased its spending in civil legal services for low-income people during the last eight years. Now, on the brink of an eviction crisis, the city will likely spend even more to keep people in their homes, experts say.

According to a report released by the Independent Budget Office last month, the city has funneled millions of dollars to civil legal service providers and expanded free legal representation to people in need, most notably in housing and immigration court.

Increase in funding for civil legal services in New York City from $40 million in fiscal year 2015 to a budgeted $232 million in 2022.

Share of New Yorkers who have access to legal representation in housing court in 2020, up from 1% in 2014.

Drop in evictions conducted by city marshals, which declined from 21,100 in 2017 to 17,000 in 2019, before the pandemic-related eviction moratoriums set by both the federal and state governments in 2020.

"We've seen, over the past few years, an increase in the amount of money that the city is spending on legal services for civil proceedings, which is something the city historically has not spent relatively much on," said Elizabeth Brown, IBO's communications director.

A pivotal moment came in August 2017, when the city enacted a right to counsel in housing court, the first of its kind in the nation. The move greatly increased demand for housing-specific legal aid, for which the city increased funding.

Data on evictions seems to point out that the increased access to legal representation in housing matters may have helped drive down the number of evictions. Eviction petitions filed citywide decreased from 230,100 in calendar year 2017 to 171,500 in 2019. Evictions conducted by city marshals declined from 21,100 in 2017 to 17,000 in 2019, a 19% drop, the IBO report says.

Then came the COVID-19 pandemic. Foreseeing a barrage of eviction proceedings that had been temporarily delayed by pandemic-spurred moratoriums on evictions and a shutdown of housing courts for over a year, the city government expanded the right to counsel, which originally covered only certain high-need ZIP codes.

Beginning in May, all New Yorkers making less than $25,760 a year — double the federal poverty threshold — became eligible to secure a lawyer free of charge for housing court proceedings.

Anti-eviction defense now makes up the bulk of the city's civil legal aid budget: $166 million, or 72%. The looming eviction crisis will likely further increase city spending even further, according to the IBO.

"It's unknown what's going to happen when the moratorium ends," Brown said. "Because the city is required to provide a lawyer in housing court, it is likely to increase the cost of the program."

Marika Dias, managing director of the Safety Net Project, a legal assistance program operated by the Urban Justice Center, said that with the pandemic-induced housing emergency and a backlog of 18,000 evictions cases pre-pandemic, the city will have to pour more money into civil legal aid services to be able to deliver on its promise — and follow its own law.

"It's clear that additional funding is needed to fund the city's right to counsel for tenants in eviction cases," Dias said. "Greater resources are needed to ensure that we have ample staffing levels and infrastructure to provide those high-quality legal services under right to counsel law."

Safety Net Project, which receives city funding as part of the right to counsel implementation, employs 36 people full time providing eviction defense and legal services to tenants in cases involving harassment by landlords, lack of repairs in residential buildings, as well as assistance to homeless people.

"The pandemic created a situation where many more tenants have struggled to keep with their rental payments, have been grappling with bad housing conditions that landlords haven't been repairing, and facing housing instability and potentially homelessness as a result," Dias said. "There is a greater need than ever for tenants to have access to legal representation to ensure that they're able to stay in their homes."

Dias said investing in civil legal aid for tenants has both a human and financial value. It can prevent people from ending up in shelters, and it saves the municipal government money in the long run, because of the high costs associated with housing the homeless, who have a legal right to shelter in the city.

"It really does have a life changing effect for New Yorkers to get that legal representation," she said.

City Council Speaker Corey Johnson said in an email to Law360 the city government is committed to maintaining funding for civil legal aid for people in need, particularly in housing matters.

"Every New Yorker deserves access to competent legal representation when it comes to housing matters," Johnson said. "The Council will continue to fight for necessary resources to protect tenants as our housing crisis is expected to worsen significantly following the pandemic."

He added, "We need our state and federal government to work with us."

The struggles of indigent New Yorkers have been compounded by a shifting legal landscape throughout the pandemic, with a dizzying array of executive orders, federal and state laws and court challenges that have created confusion.

A U.S. Supreme Court decision on Aug. 12 blocked the implementation of a part of the COVID-19 Emergency Eviction and Foreclosure Prevention Act, which allowed tenants to freeze eviction proceedings against them by declaring hardship caused by the pandemic.

"​​The court should commence restoring stayed proceedings to active calendars, keeping in mind that existing state and federal moratoria or a stay pending a rental assistance application may still apply," Judge Marks wrote.

There are a host of state and federal eviction defenses that tenants can still rely on, however. In its ruling, the Supreme Court said a New York law preventing renters from being evicted for failing to pay rent during the pandemic, the Tenant Safe Harbor Act, still applies.

A two-month federal moratorium enacted on Aug. 3 by the Centers for Disease Control and Prevention prohibiting landlords from evicting certain tenants living in areas with "high" or "substantial" COVID-19 transmission rates also survived the ruling.

In addition, tenants who applied for the Emergency Rental Assistance Program, a federally funded rent relief program administered by the state, continue to be shielded from eviction until their applications are pending.

The city distributes legal aid funding through the Human Resources Administration's Office of Civil Justice in the form of contracts supported by the mayoral budget and discretionary grants to providers. Some employ a lot of people, others are relatively small.

Housing Conservation Coordinators, a community-based tenant rights organizing group with a storefront in Hell's Kitchen, a neighborhood in the West Side of Manhattan, has a team of seven attorneys representing tenants in eviction proceedings and legal matters involving repairs, as well as in immigration and elder law matters.

"We're trying to provide legal representation to as many low-income tenants as possible," said Lynn Horowitz, managing attorney of the group's housing practice.

The increased city funding will allow Housing Conservation Coordinators to grow its legal team's head count, which includes lawyers and advocates, by 20%, she said.

The aim was to help reduce the homeless population, which had been rising steadily in the years before de Blasio took office and continued to increase throughout his first term.

Ian Martin, a spokesman for the HRA, credited the city's investments in eviction defense and programs helping tenants negotiate with landlords for a decrease in the number of evictions before the pandemic.

According to state court data, only 1% of tenants facing eviction in housing court had legal representation in 2013. At the end of 2019, 38% had counsel.

"We are squarely focused on reaching even more individuals and families with that progress as we continue to emerge from this crisis," Martin told Law360 in an email.

The increase in civil aid funding didn't benefit only tenants. It also allowed for the creation of programs assisting immigrants and low-wage workers. City-funded legal programs counseled about 28,600 immigrants in 2020 alone, up from 14,700 in 2017, according to the IBO report.

"Even though there isn't a full right to counsel in all civil issues, our goal is to represent our clients in the civil legal problems that arise because they are entangled with the criminal legal system or in other legal systems," said Runa Rajagopal, director of the civil action practice at The Bronx Defenders.

Her team complements the work the organization does on its better known criminal defense side, but is also one of six providers in the Bronx that are contracted by the city to represent tenants in housing court as part of the right to counsel implementation.

Before the expansion in legal representation, housing court was "not a space for justice," she said. People would end up in eviction proceedings without representation and regularly lose their homes. The right to counsel, which was passed after a years-long campaign by tenants-rights advocates, provided a turning point. The pandemic will now put that right to the test.

"We're just trying to figure out the best ways to support people at risk of eviction," she said. "So much is unknown."