Non-English Speakers Find Justice Can Be Lost In Translation 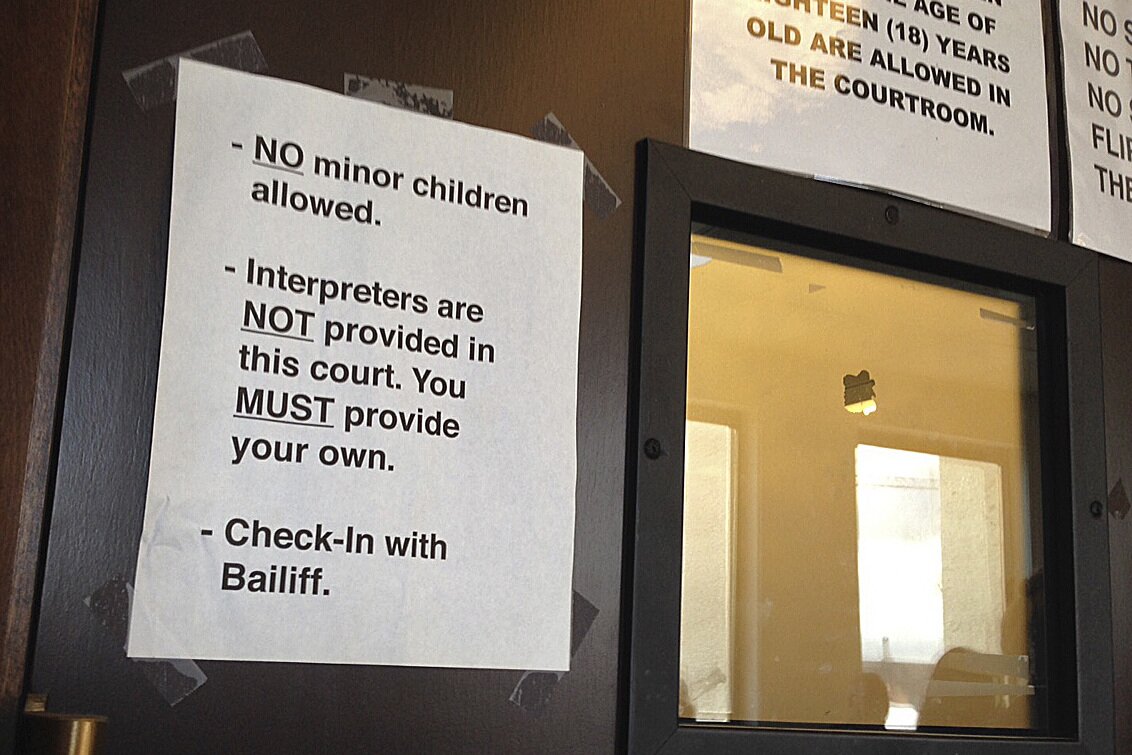 Only 37 states require certified interpreters be provided to litigants who don't speak English, and just 28 ban courts from making litigants pay for interpreters, according to the National Center for Access to Justice. (AP Photo/Sudhin Thanawala)


A defendant who a prosecutor insists has shown no remorse for a shooting apologizes to the victim in Spanish in a Richmond, Virginia, court, but his interpreter mistakenly tells the judge he wants an apology from the victim.

An Amharic-speaking woman describes the domestic violence she faced in a New York court, but her interpreter alters her testimony, possibly because he is uncomfortable with its graphic nature.

A suspect in Norfolk, Virginia, faces 15 charges including attempted murder of a police officer, but is informed in Spanish only that he is accused of "hurting" a cop.

I have seen where cases were lost by the defense or by the prosecutor because they didn't have a competent interpreter. 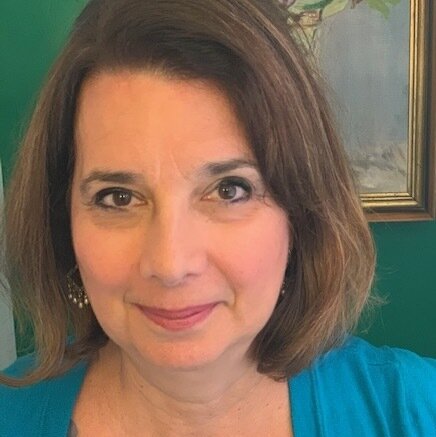 Those who don't speak English face misunderstandings like these in courtrooms "more than people assume," according to Patricia Michelsen-King, a Virginia court interpreter who witnessed or was involved in some of these incidents. "So many times these things happen without people realizing because the only person who speaks two languages is the interpreter."

Many courts, especially at the federal level, have improved language access for these non-English-speaking litigants, defendants and witnesses in recent years, Michelsen-King and other advocates say.

But a shortage of interpreters, uneven training and credentialing, and a lack of information and funding still hamper language access in even the most proactive state courts, according to experts. As a result, that access is inconsistent from state to state, with some courts leading the way and others failing to keep up.

"And there are some states that are so far behind, they're in the dark ages," Michelsen-King said.

A Tale of Two States

In 1970, the Second Circuit ruled it unconstitutional to try an immigrant who spoke no English for murder without giving him an interpreter.

Since then, the need for greater language access in the courts has only increased. Over 65 million Americans, or 21.6% of the population, speak a language other than English at home, according to 2019 data from the U.S. Census Bureau. That number has nearly tripled since 1980, according to the Center for Immigration Studies.

But while the federal courts have largely done a good job of improving access for those with limited English proficiency, or LEP litigants, the availability and quality of that access still varies wildly at the state court level, experts say.

"A few states are doing relatively well, but generally speaking no one's doing great and some people are doing positively awful," according to James Gamble, director of the Justice Index Project at the National Center for Access to Justice. 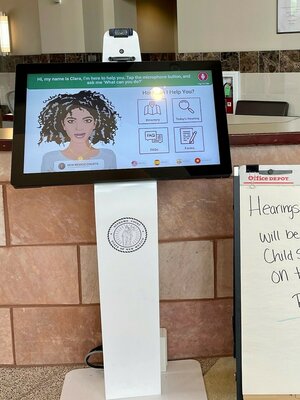 New Mexico is one of the places that's doing better than most, according to NCAJ.

In its latest Justice Index, NCAJ ranked New Mexico's court system as the best in the nation for providing access to LEP litigants, in part because the state requires interpreters to be certified and prohibits charging litigants for interpreting services.

New Mexico courts have also trained over 100 language access specialists to provide language help outside the courtroom, according to Paula Couselo-Findikoglu, deputy director of the state's Court Services Division. These specialists can offer help with forms, answer questions about court cases, and provide information about community and legal aid organizations that may be available.

Courts in the state also offer document translation and allow self-represented litigants to file pleadings in their own language, Couselo-Findikoglu said. An interactive, multilingual avatar appears on courthouse kiosks to answer questions, give directions and provide case information in languages other than English.

New Mexico is "a pace-setter" when it comes to language access in the courts, according to NCAJ Executive Director David Udell.

"People don't tend to come to our courts just because they have free time. They're typically stressed out, they're typically undergoing very dire circumstances," Couselo-Findikoglu said. "And so to be able to remove that language barrier is fundamental. It has to do with fundamental access to justice."

That language barrier is still firmly in place in other states, including South Dakota, which NCAJ ranked last in its report.

Minnehaha County, the state's largest population center and home to Sioux Falls, stopped providing interpreters in civil court several years ago after a dispute over who should pay for them — the county or the court system, according to Brent R. Thompson, executive director of East River Legal Services.

That's despite the fact that Sioux Falls is growing quickly, with a diverse population that includes Hispanics, East Africans, Ukrainians and Pacific Islanders, Thompson points out.

Without interpreters, many of his clients have found it "just impossible" to handle divorces, evictions and other disputes in courtrooms where they don't speak the language, he says, and his organization has stepped up to provide its own interpreters, creating a "huge burden on our office."

"It just was a complete mess," he said.

South Dakota's courts also don't require language access training for employees, nor do they translate all necessary court documents or provide courtrooms with remote interpreting technology, according to NCAJ's report.

South Dakota lawmakers took a significant step when they changed the law in March to clarify that interpreting services in civil actions are funded by the state court system rather than the county, Sattizahn said. The change came only after years of lobbying by advocates, according to Thompson, including his own organization.

It's just not a priority within our legal leadership in the state. 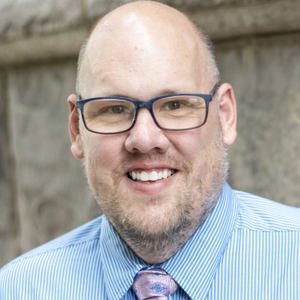 That means interpreters should soon be available in civil cases, though Thompson says he hasn't seen any mechanism put in place yet for providing those interpreters.

And counties still have to foot the bill for interpreters in criminal cases, according to Sattizahn.

The state court system is also currently adopting a language access plan that will be completed in the fall, Sattizahn added. So far, 29 states have already implemented language access plans that, among other things, outline courts' commitment to monitor and evaluate their language services, train judges and staff in language access, provide interpreter services, and translate documents and signage, according to the NCAJ report.

"It's a unique challenge, and I don't take that away from anybody. It is hard," Thompson said. "But frankly, just the attention to these types of issues, it's just not a priority within our legal leadership in the state."

Improving the number and quality of court interpreters and making sure litigants know they're available are the biggest steps South Dakota and other states can take to ensure language access in the courts, according to advocates.

A shortage of interpreters means LEP litigants often come to court only to have their hearings rescheduled because of a lack of available interpretation services, according to Veronica J. Cook, director of litigation at Queens Legal Services in New York City and a member of the state court's Advisory Committee on Language Access. 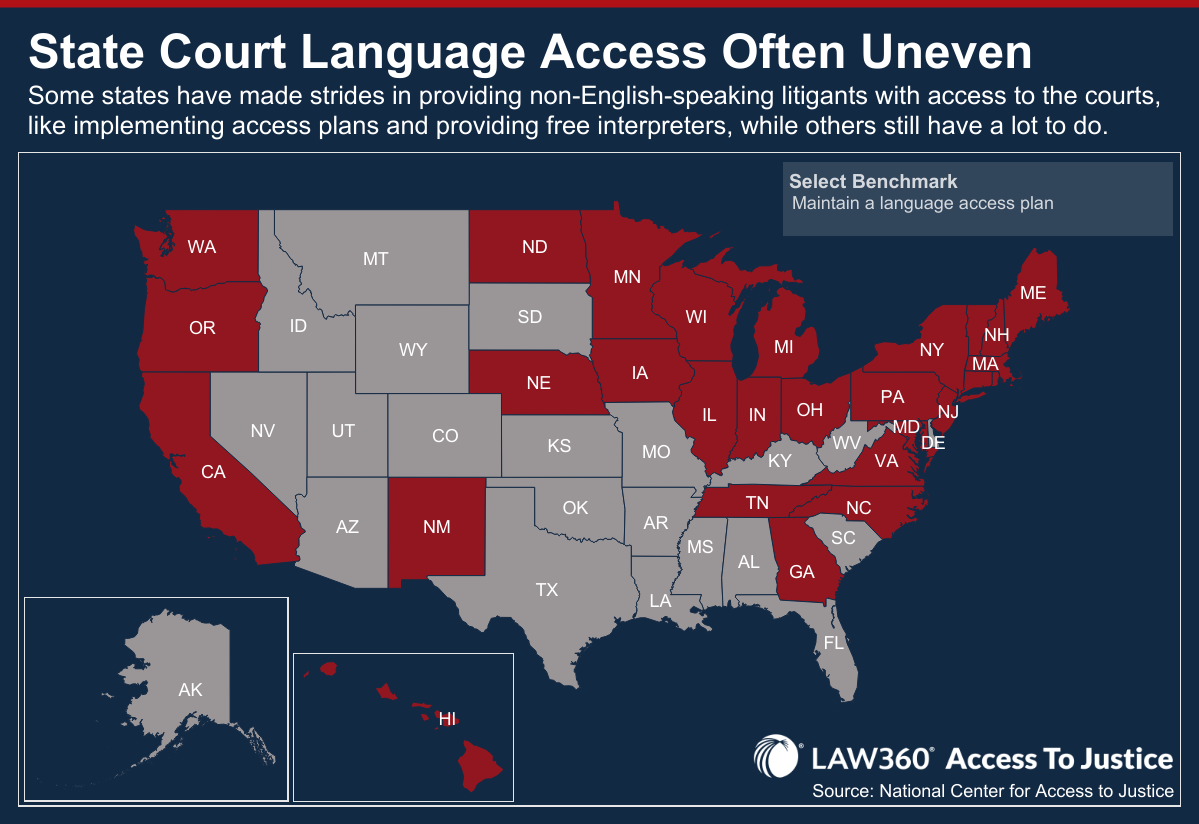 
Cases can be continued multiple times as a result, leading to extensive delays that require litigants to return to court over and over. "It's another day that you're losing work," Cook says. That shortage is especially severe for rarer languages, like Urdu, Bengali and Arabic, according to experts.

"When we think about equal access, one of the key things is trying to make sure that LEP litigants have access in a similar timeframe to English-proficient litigants," Cook said.

New Mexico courts use remote interpreting technology to handle rarer languages, like Navajo. The technology allows interpreters from other locations who may speak a less-common language to step in when needed, according to Couselo-Findikoglu.

One positive to come out of the coronavirus pandemic is the increased use of that kind of technology, she says, though she and Cook admit they prefer in-person interpretation if it's available.

Requiring training and credentialing for interpreters is another "very easy solution" that could improve language access, according to Michelsen-King, who also coordinates the Spanish-English Translation Interpretation Certificate program at Virginia Commonwealth University.

Only 37 states require courtroom interpreters to be certified, according to data from NCAJ. Just 14 evaluate the effectiveness of individual interpreters.

"While many states administer NCSC exams as part of their credentialing requirements, each state is responsible for its own certification and testing program," Konstantina Vagenas, director and chief counsel of the National Center for State Courts' Access to Justice Initiatives, said in a statement.

South Dakota, for instance, doesn't require interpreters to be certified, according to Sattizahn, who says that gives judges the flexibility to use interpreters from other states or who do not traditionally interpret in the court system.

But using interpreters who aren't trained in the legal system is a problem, according to Michelsen-King, who points out that an interpreter needs to know how the courts work to be able to translate what's happening in them.

"You can't interpret what you don't understand," she said.

Even in states where interpreters are certified, applicants only have to score 80% to pass the federal exam and just 70% to pass some less-rigorous state exams, according to Michelsen-King.

By contrast, California's Court Reporters Board and the New York State Court Reporters Association require court reporter applicants to achieve 97.5% and 96% accuracy, respectively, according to their websites.

"I have seen where cases were lost by the defense or by the prosecutor because they didn't have a competent interpreter," Michelsen-King said.

Finally, making sure LEP litigants and court staff know that interpretation services are available and how to schedule them is crucial, experts say.

Many of those litigants aren't aware they may be entitled to interpretation services, according to Cook, and court staff and judges often fail to offer those services.

"Just telling people that they're entitled to have an interpreter is big," NCAJ's Udell said.

Courts should improve multilingual signage and include notices with every summons or court document letting people know interpreting is available, according to Cook.

Systems for scheduling interpreters in advance also need to be simplified and explained to litigants, something that could reduce delays, she adds. The way it's handled now, scheduling an interpreter is nearly impossible, especially for self-represented litigants.

"These are resource-heavy things to create and to create effectively," he said.

But most advocates say it's far better to spend that money upfront to ensure people aren't evicted or lose custody of their children simply because they don't speak English rather than having to spend it down the road.

"Are you going to have the resources to try the case again because it's been appealed?" Michelsen-King asks. "If these cases come back, then you're still spending the money, and [it's] better to get it right the first time."