Despite the U.S. military's efforts to curb sexual misconduct in its ranks, a recently released study from the U.S. Department of Defense shows that reports of sexual assaults and harassment involving service members have increased.

Elizabeth Foster, the DOD Office of Force Resiliency's executive director, said in a statement Thursday that the Defense Department is taking "unprecedented action" to address the prevalence of sexual assault in the military and restore service members' trust in the military justice system.

"These efforts include standing up a prevention workforce to prevent harmful behaviors and build climates of dignity and respect, establishing independent Offices of Special Trial Counsel to prosecute sexual assault and other named offenses, and professionalizing the sexual assault response workforce with enhanced skills and the independence required to support survivor recovery," Foster said.

Undersecretary of Defense for Personnel and Readiness Gilbert R. Cisneros added in the statement, "Across the entire Department of Defense, we are building enduring cultural change on an unprecedented scale. We are incorporating accountability and transparency into our response process while establishing a professionalized prevention workforce to reduce harmful behaviors and promote the well-being of our service members."

Here are four key takeaways from the Defense Department's annual report on sexual assault and harassment in the armed services.

The number of reported sexual assaults involving a service member either as a victim or perpetrator increased by 13.4%, from 7,816 reports in 2020 to 8,866 reports in 2021, according to the DOD's data.

The uptick in reported military sexual assaults was mostly driven by the U.S. Army, which alone experienced a 25.6% increase in reports from 2020 to 2021, the Defense Department said. Reports increased 9.2% in the U.S. Navy, 2.4% in the U.S. Air Force and 1.7% in the Marine Corps during the same time period.

Reports of sexual harassment generally also increased from 1,781 reports in 2020 to 3,174 reports in 2021, according to the Defense Department. 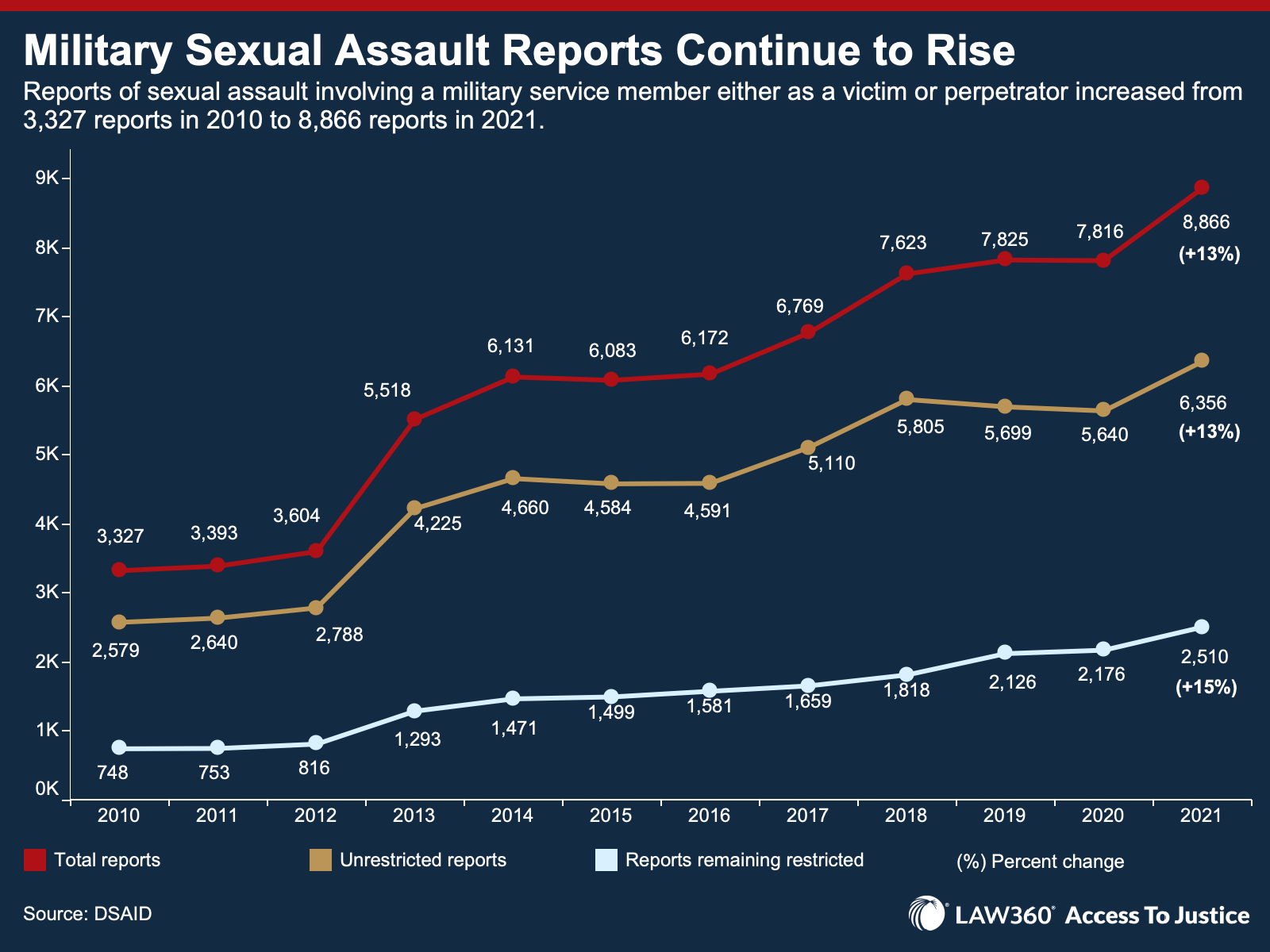 For the first time, the Defense Department surveyed service members about "unwanted sexual contact" rather than specific behaviors related to sexual assault, according to the report.

The report said the Defense Department changed its workplace and gender relations survey metrics from 41 items about specific behaviors related to offenses in the Uniform Code of Military Justice to five items about unwanted sexual contact to reduce the burden on service members who completed survey.

From the 2021 survey results, the report found that 8.4% of active duty women and 1.5% of active duty men responded that they experienced unwanted sexual contact in the 12 months before being surveyed. The survey was administered from December 2021 to March 2022.

Even though the number of reported sexual assaults involving service members increased over the past decade, the Defense Department found that the rate of reporting appeared to decrease based on survey data.

The Defense Department compares survey data and filed reports to estimate the percentage of service members who decided to report their sexual assault to the department, according to the report.

The survey found that top two reasons men and women service members didn't report their sexual assaults were thinking that it was not serious enough to report and that no action would be taken.

Most Cases Had Sufficient Evidence

The report found that commanders had sufficient evidence to pursue disciplinary action in 2,683 cases, or 67% of accused service members' cases. This is the first year that the Defense Department included data in its annual report on military sexual assault about whether sufficient evidence was available for commanders to take disciplinary action.

Disciplinary action was not taken in 1,263 cases because of a lack of evidence to prosecute an offense, according to the report.

About 2% of cases resulted in findings that the assault did not happen or that the accused did not commit the alleged offense, the report said.