5th Circ. Judge Willett On Textualism And Giving Up Twitter 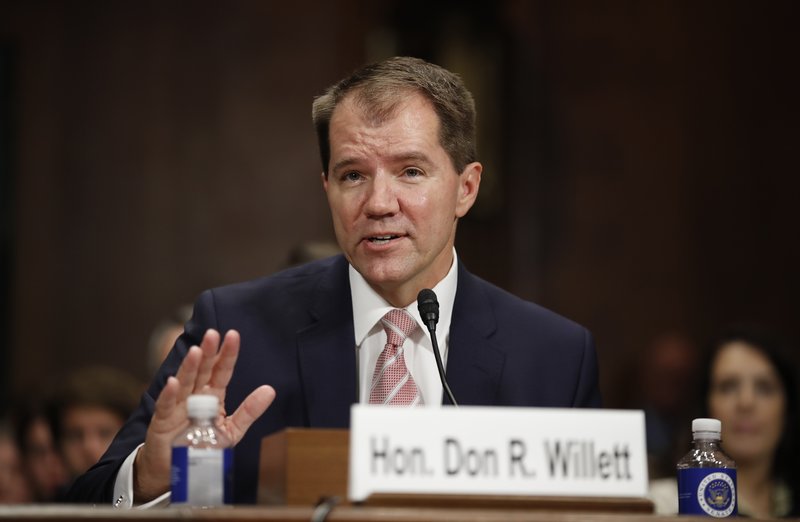 Don Willett testifying in 2017 at a Senate Judiciary Committee hearing on his nomination to the 5th Circuit. (AP)


He no longer goes by "Justice," but Fifth Circuit Judge Don Willett is getting along all the same after 12 years on the Texas Supreme Court. Now, he says, he can apply his judicial philosophy to the "weighty" federal questions that don't appear in state cases.

The "decadent New Orleans food" doesn't hurt either, he adds.

One of President Donald Trump's appointees to the federal circuit bench, Judge Willett tweeted his way to legal stardom as a member of Texas' top court, amassing thousands of Twitter followers for his punny one-liners before stepping away from his account on the eve of his Fifth Circuit commission.

But there's more to the 53-year-old jurist than his online avatar. Judge Willett has authored a number of major rulings since joining the U.S. appeals court. In perhaps his most significant yet, he wrote an opinion for the full circuit Friday holding that the structure of the Federal Housing Finance Agency, a housing regulator created after the 2008 subprime mortgage crisis, is unconstitutional.

To his liberal critics, Judge Willett represents the influence that outside groups like the Federalist Society and its network of legal conservatives have had on the federal courts under Trump. Willett, like so many of the president's nominees, is a longtime member and favors the judicial doctrines of "textualism" and "originalism" commonly associated with the right.

But to those who would view him as a conservative foot soldier, he can surprise. In a case involving a police officer shooting last month, for instance, Willett rang the alarm bells about the U.S. Supreme Court's qualified immunity jurisprudence for making it too hard to sue the government for wrongdoing. The opinion even earned a rebuke from another recent Trump appointee, Circuit Judge James Ho.

Judge Willett agreed to participate in an email Q&A with Law360 as part of an ongoing series on Trump's federal judicial appointments. In a nod to his Twitter days, however, he kept his answers to under 280 characters. Like any savvy user of the site, he made the requisite abbreviations to get there.

Judge Willett, you spent over 12 years as an associate justice on the Texas Supreme Court before joining the Fifth Circuit in 2018. What are some of the pros and cons of your new job compared to your last one?

Cons: no more discretionary docket; a bit more cloistered; the volume & velocity are next level—like Lucy & Ethel in the chocolate factory, the conveyer belt is 24/7.

Circuit judges are bound by Supreme Court precedent, but they're hardly passive participants in the legal system. Can you explain the role of circuit judges in the development of the law?

I'm "middle management" these days, no longer the final word. I salute smartly, abide precedent & keep the assembly line humming. 90+% of our decisions are 3-0—remarkable unanimity. But it's ok to respectfully voice unease & urge reappraisal of precedent, even as I'm bound by it.

In a response to Sen. Feinstein, you seemed to endorse something called "fair-reading textualism" as an approach to interpreting statutes. Can you explain what that is, and how it might differ from other methods of statutory interpretation, including other forms of textualism?

Justice Elena Kagan has said, "we're all textualists now." Indeed, many of the president's recent judicial appointees seem to label themselves as such. As textualism becomes more and more ascendant in the judiciary, what advice do you have lawyers presenting textualist arguments?

Read—then repeatedly reread—Making Your Case by Scalia/Garner. Same for judges. Principled textualism is 100% apolitical. And ascetic literal parsing isn't textualism. Statutory meaning derives from linguistic context. My lexicographic role is to give words their honest meaning.

Asked by Sen. Feinstein about your membership in the Federalist Society, you wrote that you are drawn to its exchange of ideas and open debate. Can you talk about an area of legal or scholarly debate that's interested you lately?

Writing styles vary wildly among different judges. Who is your audience when you set out on a majority opinion? What about a dissent?

I write for a smart lay audience. Above all, I want my work to be reader-friendly. The judiciary is the most elegant branch b/c it's the only one expected to explain, methodically, how it reasoned its way along. I try to be conversational b/c accessibility enhances legitimacy.

How do you decide on tone? Is there a balance to be struck between readability and legal precision?

I write to be understood. So I aim for clarity & simplicity. The bull's-eye for judges is taking something complex & explaining it in an accessible way w/o sacrificing substance. Clear. Concise. Engaging. No ponderous legalese. It's a legal document but needn't be tedious dirge.

I know you are probably tired of talking Twitter, but I'd be remiss if I didn't at least ask the former Tweeter Laureate of Texas how he is adjusting to life off the social media site? Is it as freeing as they say, or are you stealing a peek every once in a while?

It's definitely freeing. It demanded time/energy. But I'm there, lurking—as are many federal judges, including some on SCOTUS. But I'm just consuming, not creating. Twitter is still my primary news feed. But it's a toxic cesspool most days; too much venomous snarling & sneering.

What would it take for you to come back to Twitter?

Prognosis: negative. As a state judge campaigning for office, it was political malpractice not to leverage social media smartly. I loved demystifying & humanizing the inscrutable judiciary. But today Twitter = an aggregator of trollery & vitriol. Pro tip: follow @IvePetThatDog.

Jimmy Hoover is Law360's senior U.S. Supreme Court reporter. For this special report, he also wrote about how President Trump's judicial appointments are changing the law. Follow him on Twitter. Editing by Jocelyn Allison, Pamela Wilkinson and John Campbell.