If Dems Win 2020, Will BigLaw Lose Its Grip On The Bench? 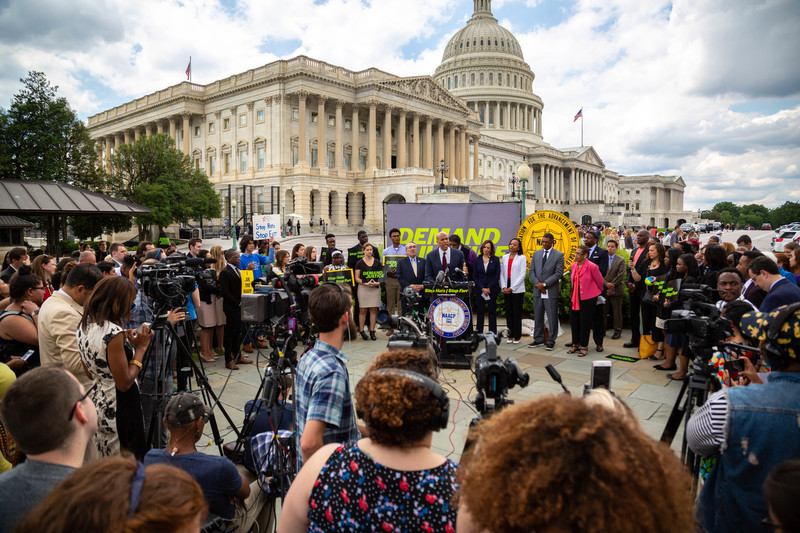 Sen. Cory Booker, D-N.J., speaks at a June 2018 rally opposing one of Donald Trump's U.S. district court picks. The event was organized by Demand Justice, a progressive group calling on presidential hopefuls like Booker to issue their own lists of potential justices. (Photo courtesy of Demand Justice)


At first, former U.S. Equal Employment Opportunity Commission chair Jenny Yang couldn't understand why so many people were sending her an Atlantic op-ed with the headline "No More Corporate Lawyers On The Federal Bench."


Then she read the piece, which recommended her for the U.S. Supreme Court.

"It was definitely nice that they thought of me as somebody who could serve in that role and provide my experience," she said.

Her experience was the point of the op-ed by Brian Fallon and Chris Kang, founders of the progressive court advocacy group Demand Justice. They bemoaned Biglaw's pipeline to the federal bench, arguing law firms' practice of defending corporations aligns with Republicans' conservative political interests, and that Democrats hoping to appear moderate and avoid partisan blockades also pick Biglaw appointees.

"Democrats' tendency to nominate corporate lawyers amounts to a political surrender to the right's vision of what background makes for an acceptable judge," Kang and Fallon wrote.

They argued that the next Democratic president should nominate candidates with no Biglaw background, like Yang. She worked as a U.S. Department of Justice civil rights lawyer, then argued employment class actions as a plaintiffs attorney at Cohen Milstein Sellers & Toll PLLC before President Barack Obama appointed her to the EEOC. Now, she's a strategic partner at Working Ideal, a company advising on workplace inclusion.

We're not saying corporate lawyers can't be fair-minded judges. But it's a very different perspective. 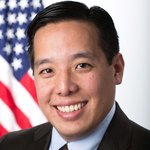 Yang questions the need for an all-out bar on corporate lawyers, but supports Demand Justice's career diversity goal. For appellate judges who collectively decide cases, she said, "when you bring people together who have had different experiences, you really have to put your proof forward; you don't just move from assumptions about what is correct."

While Yang doesn't rule out judging as a career, she hedged when asked if she'd contemplated it before.

"There are so many factors that are not really within your control," she said. "It's such a small pool of people who are ever considered."

Demand Justice isn't the only left-leaning group hoping to expand that pool if a Democrat wins the White House in 2020. Alliance For Justice recently announced a program promoting not only career diversity on the federal bench, but an array of demographic, geographical and philosophical backgrounds.

The initiative, called "Building The Bench," will identify would-be judges to counteract Trump's appointees, who are "turning the clock back on civil rights, women's rights, workers' rights, the environment, and privacy," according to Alliance For Justice's executive director, Nan Aron.

Her group has long fought right-wing ideology in the courts. But while its conservative counterparts like the Heritage Foundation and the Federalist Society handpick jurists who subscribe to a textualist credo, Aron says Building The Bench is more inclusive, with no ideological litmus test.

That poses "a challenge that doesn't exist on the right side of the aisle," says David Engstrom, associate dean at Stanford Law School and one of dozens of academics and attorneys on Building The Bench's advisory council.

"Democrats have always been a more diverse and more multifaceted bunch," Engstrom said. "The challenge when thinking about who should sit on the bench is how to tap that diversity of viewpoint and experience."

A few years after it was founded in 1979 to protect the constitutional rights of individuals, Alliance For Justice launched the Judicial Selection Project. It was instrumental in defeating Ronald Reagan's U.S. Supreme Court nominee Robert Bork, who drew controversy for his views on civil rights and his role in the Watergate cover-up. The group helped mount an unsuccessful attempt to tank Justice Brett Kavanaugh's nomination last year.


Now, with 20 contenders still jostling for the Democrats' nomination, Alliance For Justice plans to cull candidates for every level of the federal judiciary, with the hope of "provid[ing] those names to the next president on Day One of his or her administration," according to a June press release.

The initiative drew criticism from conservative activist Carrie Severino of the Judicial Crisis Network, who lambasted Alliance For Justice for not publishing its picks.

Senators tend to turn to the people they know best: Political donors, campaign managers, lawyers who are active in their states. This effort is to expand that pool. 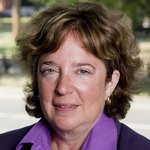 executive director of Alliance For Justice

Releasing a judicial shortlist had been unheard of until May 2016, when then-candidate Donald Trump publicly revealed his top choices to replace the recently deceased Justice Antonin Scalia. His list was compiled by Leonard Leo of the conservative Federalist Society.

During the June Democratic debates, Judicial Crisis Network aired an ad that said, "Trump released his list." It flashed headlines about Building The Bench while accusing former Vice President Joe Biden of "running for president with a list of secret court picks."

Alliance For Justice insists this is pure fiction. Several members of the advisory council said Building The Bench is still in its infancy and Aron said there isn't, and won't be, a shortlist.

Kang's group, Demand Justice, plans to name its picks, but Kang says he understands why Alliance For Justice might be reluctant to name any lower court hopefuls.

"Maybe people aren't ready to make it publicly known they're interested in a judgeship," he said.

But he thinks presidential contenders ought to divulge Supreme Court shortlists, so "all Americans can see how it is these candidates view the law."

Republicans made their judicial preferences known. Democrats shouldn't shy away from following suit, he said.

"What does it mean to you when you say 'fair-minded and progressive judges'?" Kang said. "This is a conversation we need to start having on the left."

The Obama administration nominated record numbers of women and people of color to the bench. The Trump administration's picks pale in comparison.

By March 2016, Obama had nominated three times as many prosecutors as public defenders, and 86% of his picks had gone the traditional route — with a law firm job or a stint as a district attorney or U.S. attorney, according to an Alliance For Justice report.

A recent analysis by Demand Justice found that 60% of circuit court judges were once corporate law partners. Kang says that background may imbue their rulings.

"We're not saying corporate lawyers can't be fair-minded judges," he said. "But it's a very different perspective, using the law to advocate on behalf of corporate interests. It's different from actually standing up in court every day advocating for individual plaintiffs."

Some of the country's most respected jurists didn't take the "well-worn path" to becoming a judge, says New York University law professor Melissa Murray, a member of the Building The Bench advisory council. She cites Supreme Court Justice Sandra Day O'Connor's experience as an Arizona state senator, which "shaped her views of what the interaction between a court and a legislative body should be."

Geographical diversity is also important, because federal district courts reflect regional idiosyncrasies, says Kali Murray, a law professor at Marquette University who's cultivating midwestern candidates for Building the Bench. For example, some of the biggest alleged monopolies in Wisconsin and Iowa are agro-businesses, she says, a far cry from real estate, computer hardware and other industries that raise competition issues in New York.

"What does a contract dispute look like in a rural context? How does antitrust law impact dairy farms?" she said.

Progressives tend to concentrate on the coasts, she said, but must "identify homegrown talent in every state."

Targeting the lower federal bench, which the Trump administration has filled at breakneck speed may be a winning short-term strategy to shift the judiciary, Engstrom says

"Trial judges are incredibly important, both because lots of cases don't get appealed, and because trial judges decide cases in ways that make them more and less appealable," he said. "The Supreme Court can't take every case, and frankly it has taken fewer cases in recent years than it has historically."


In September 2017, Federal Election Commission Chairman Matthew Petersen was tapped to serve as a judge for the District of Columbia. Petersen boasted conservative credentials, having served as Republican chief counsel to the Senate Rules Committee before President George W. Bush picked him for the FEC.

But at a confirmation hearing, Sen. John Kennedy, R-La., questioned Petersen about trial procedure and his litigation experience. By the time the senator asked him to recite the Daubert standard for expert testimony, sweat sheened Petersen's forehead.

"I don't have that readily at my disposal," he said. 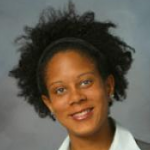 Murray thinks the exchange was unfair, given the cases Petersen would have decided.

Promoting a diverse bench will have various challenges. One of them will be getting lawmakers to consider nominees with atypical careers.

Building the bench with progressive judges will also require breaking "a cycle of cronyism" in how lawmakers find jurists, according to Aron.

"Senators tend to turn to the people they know best: Political donors, campaign managers, lawyers who are active in their states," she said. "This effort is to expand that pool."

Another challenge will be casting a wider net.

Murray lives in Wisconsin, where last year, before a Democratic attorney general was sworn in, state Republican lawmakers shuttered the Solicitor General's Office, "where a lot of federal judges come from," according to Murray.

"How do you select individuals when you're in a fairly 'red' state?" she said. "I have to do more uncovering."

Cara Bayles is a features reporter for Law360. Follow her on Twitter. Graphics by Chris Yates. Editing by Jocelyn Allison, Pamela Wilkinson and John Campbell.