Law360 (March 21, 2018, 9:31 PM EDT) -- The Tuesday resignation of Latham & Watkins LLP Chair Bill Voge amid a sexual misconduct scandal investigated by Law360 showcases how personal behavior can become a professional liability for attorneys, but experts say it falls well short of a #MeToo reckoning for BigLaw. 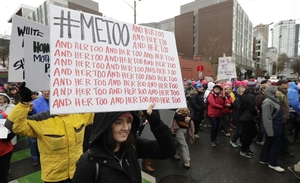 Bill Voge's resignation has struck a chord in an environment well-tuned into sexual misconduct issues. Above, a Seattle Women's March participant in January. (AP)

Voge's resignation over lewd messages and allegedly intimidating behavior toward a woman unconnected to the firm has struck a chord in an environment well-tuned into sexual misconduct issues. So far, however, his story is more of a warning on how personal misbehavior can derail an attorney's career rather than a turning point for how BigLaw tackles sexual harassment.

"I think it was the right outcome given his position at the firm, and I think you would have seen that outcome before #MeToo," said Rosalind Fink, an employment attorney with Brill & Meisel.

That's not to say the #MeToo moment has not colored the incident, experts note. Likely, Voge's resignation would have been less noisy a year ago — a quiet resignation, with the firm not acknowledging the reason for his departure, according to Fink.

"Most interesting is that the firm wanted to get out in front of [the scandal] and that he issued a response," said Fink.

Before news of Voge's resignation broke out, Law360 had conducted a week-and-a-half-long investigation into allegations he engaged in a pattern of reckless behavior starting with sexually explicit messages sent to a woman he approached on behalf of a Christian men's group and culminating in threats to her husband to have her thrown in jail.

Some experts noted that Latham's swift and transparent approach should become the standard for how BigLaw deals with misconduct among its partnership ranks, especially when it comes to sexual misconduct that might otherwise have been kept quiet.

But Voge's scandal does not fit neatly into the #MeToo reckoning vein of, say, Harvey Weinstein, for a number of reasons, experts noted. For one, Voge's communications with a woman he never met and who was not linked to his work for Latham are not an employment law situation.

"This is not about employment — this is about personal conduct," said Minna Kotkin, director of the Brooklyn Law School Employment Law Clinic.

Experts also noted that it is difficult to view Voge's scandal as a repudiation of a lax culture toward ingrained sex harassment at either the firm or the industry at large. Kotkin noted she believed law firms have been careful about handling sexual harassment matters, which is part of the reason why we haven't seen a major #MeToo moment in the law.

"Law firms haven't had a public #MeToo moment, and it remains to be seen whether there are other shoes to drop," said Kent Zimmermann, a consultant with Zeughauser group.

Additionally, Voge's position as a firm leader played a significant role in his downfall, according to experts.

"Personal is not always professional, but a partner in a leadership position plays a special role and must lead by example," said Zeughauser.

Fink noted that firm leaders are sometimes bound by moral clauses in their employment contracts, which give the partnership the right to boot a leader over anything that could embarrass the firm or put it in a bad light. It was not immediately known whether Voge was subject to such a clause.

What Voge's resignation does highlight is the damage sexual misconduct can do to an attorney's career even if it does not happen within the context of their work as a lawyer.

"If I was in charge of a law firm, I might remind all lawyers and employees that they are to act in a manner that doesn't cast a poor light on the firm," said Kotkin.

Zimmermann noted that the current #MeToo climate only heightens an existing scrutiny on lawyers' characters, which often begins with the character fitness tests most bar associations require incoming attorneys to pass.

"Because of that history of careful vetting, it's unsurprising to me that the personal is relevant to the professional for lawyers," said Zimmermann. "It always has been, and I think the current climate just makes it more acute."

He added that he does believe the Voge scandal, especially given the current climate, could discourage lawyers with questionable past behavior from rising up the leadership ranks.

"I think there are lawyers who, upon hearing the story, will scale back their leadership ambitions because they will feel like skeletons in their closet could be disqualifying, and I actually think that's healthy for the industry," said Zimmermann.

However, Voge's resignation is unlikely to put law firm human resource departments in the business of investigating and disciplining most personal indiscretions made by associates, nor is it likely to commence an industrywide "witch hunt" for partners behaving badly, said Kotkin.

For the firms that do end up discovering serious misconduct allegations about one of their attorneys, several experts warned that they should not allow the current climate or Voge scandal to rush them toward giving the alleged culprit a push out the door without a thorough investigation.

"I think in this heightened environment, that's worth bearing in mind," said Zimmermann.