How Women Are Changing The Law Firms They Lead

They forged their path to the top of the field, even as many were mistaken for court reporters at trial or flight attendants on business trips.

Many introduced maternity policies decades back, often because they had been the first attorney at their firm to get pregnant and not leave.

Several proposed — and launched — women's or diversity committees, long before they became a business standard.

These women have scraped their way to the top. Now, they want to pull up other women, too. And this may be their toughest challenge yet.

Women have made up about half of law school graduates for well over a decade now, but female lawyers still represent just 20 percent of equity partners, according to Law360's latest Glass Ceiling Report. And of around 350 firms surveyed, 43 — or 12 percent — said they had a female chair, managing partner or other commensurate position.

On average, these 43 firms have a higher representation of female attorneys at every level. But their leaders say the industry is still letting valuable female talent slip away.

In response, they are launching a host of initiatives so more women can join their still-too-rarefied equity partner ranks.

"We can't have another generation of women lawyers not being supported," said Stasia Kelly, managing partner of the Americas region for DLA Piper.

Many of the women heading U.S. law firms know what it is to go it alone.

When Meryl Lieberman and Lisa Shrewsberry, co-managing partners of Traub Lieberman Straus & Shrewsberry LLP, started practicing law three decades ago, they often found themselves in situations where they were the only woman in a room.

"Even if there might be some lip service, women didn't really have a voice," Lieberman said.

Even in the mid-aughts, when Kim Koopersmith, the current chair of Akin Gump Strauss Hauer & Feld LLP, attended a managing partner event, she found herself surrounded by a sea of nearly 300 navy-blazered men.

"I remember thinking, I should take a picture of this," she said. "This is such a statement about where the industry is."

Most of the women credit their rise to risk-taking and persistence, and they want the incoming generations of female lawyers to feel more comfortable taking chances and going after coveted roles.

Patricia Santelle, White and Williams LLP's managing partner and executive committee chair, said her rise to the top was built on volunteering for assignments and committees, then putting herself up for such roles as practice leader.

"Women still expect rewards will come by hard work, good work, as opposed to having to take the next step and ask for it," she said.

Santelle and others hope their presence leading large firms helps encourage others to take a chance on BigLaw, rather than leave for opportunities as in-house counsel, academics or solo practitioners.

Law360's Glass Ceiling data suggests that having a female head does indeed attract more female attorneys to a firm. Women make up 38 percent of the lawyer headcount at such firms, compared with a 35 percent average at all firms surveyed. 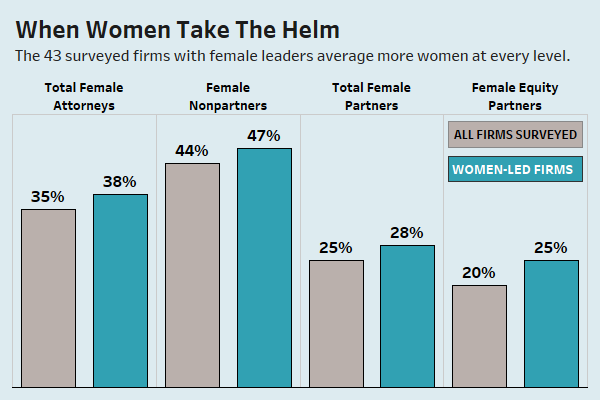 The differences are more noticeable when it comes to partnerships. While firms overall average around 20 percent female equity partners, 25 percent of the equity partners at female-led firms are women.

Having more women in the upper echelons can be notable for attorneys like Jennifer Grady, now the managing partner of Richards Kibbe & Orbe LLP, who recalls the common experience of seeing a shrinking number of female colleagues as her career progressed.

"One of the challenging things was to look up and see that as you climbed the ladder in a law firm, there were fewer and fewer women," she said.

But despite that draw of having a woman at the helm, female firm leaders know their presence is not enough to ensure gender equity throughout their law firm ranks — let alone the industry.

Indeed, not all law firms with a female leader beat the industry averages for female representation, according to Law360's Glass Ceiling data. And when averaged out, firms led by women outpace male-led firms on gender diversity by only a few percentage points.

That's why many of the female leaders are trying out a variety of programs and initiatives to try to level the playing field.

At Arent Fox LLP, for example, managing partner Cristina Carvalho has focused in part on leadership and business development programs. While these programs are open to both men and women, she pushes to ensure that about half of the participants are women.

While it's not easy for any attorney to build a large book of business, Carvalho noted that male attorneys are more likely to put one together — a tendency experts attribute to factors like implicit bias, in which male attorneys often steer work to other men. Beyond the financial toll this takes on female attorneys, it can also undercut their chances at getting into the partnership ranks.

"If they are not in positions of visibility, sometimes what happens is they are not top of mind for elections," said Carvalho, who makes a point as managing partner to engage as early as possible with female associates and partners.

Both Akin Gump and Bryan Cave Leighton Paisner LLP have assignment systems meant to make sure that young attorneys' opportunities are not left to chance — where implicit bias can give short shrift to women and minorities.

Generally, the workplace assignment systems target more junior attorneys — for example, associates up through their third year at Bryan Cave — and track what they spend time on. For supervisors, the tracking allows them to see how they might spread assignments more evenly and ensure no one is losing out on an opportunity to, say, take a deposition.

"It's really a combination of making sure our associates have enough work to do and also that they are getting work suitable for their level of experience and moving up to the next level," said Terry Pritchard, Bryan Cave's co-chair.

Marci Eisenstein, managing partner of Schiff Hardin LLP, reviews the composition of all pitch teams, which gives her an opening to push opportunities to diverse attorneys at higher levels. She takes that responsibility seriously and is quick to note that the premise of placing female and minority attorneys on a team to check off a diversity mark is the wrong way to look at it.

Rather, her goal, whenever possible, is to give attorneys who have the skills to address a client's needs a chance to do so, rather than leave their appointment to internal contacts and relationships that could be tinged with implicit bias.

"We don't want to have a team that is a window dressing team," Eisenstein said. "But I want to make sure that if there is someone there who has the bona fides, that person is going to be on the team."

At Akin Gump, one of the first changes Koopersmith made when she rose to chair was to set terms and term limits on all firmwide committees to ensure a greater variety of voices.

"I thought it was a very good way to enhance the chances for a more diverse range of partners to participate in firm leadership and shine," she said.

In terms of work-life balance, women-led firms have also been at the forefront of pushing industry change on remote working and parental leave policies.

Morgan Lewis & Bockius LLP and Schiff Hardin both have "ramp" programs that reduce time expectations for new parents and others coming from an extended leave. The programs are gender-neutral, but they tend to especially benefit new working mothers.

Last year, Morgan Lewis also unveiled a remote working program where attorneys can work from home two days a week, which was largely spurred by chair Jami Wintz McKeon's own experiences as a working mother.

Too often, especially in years past, female attorneys facing the prospect of balancing a partnership track and child care would feel as if they didn't have the tools at hand to make it work, said Kelly, the DLA Piper managing partner. As a result, she said, they would leave private practice for government or in-house roles.

At DLA Piper, the focus has been on internal programs like Women Emerging Law Leaders or the Leadership Alliance for Women, which provide road maps for business development and show up-and-coming women how to climb the career ladder.

Kelly says these programs, in part, try to tackle the family and social hurdles that women in particular tend to face and focus female attorneys on creating a plan for what success in the law firm would look like for them.

"I hate the term 'work-life balance,'" Kelly said, "because it's all life."

'When You Don't Think About It'

On Nov. 20, Ropes & Gray LLP sent out word at 10:33 a.m. EST that Julie Jones had been named chair-elect. Within the hour — at 11:25 — she had a "Welcome to the club" email from several other female law firm chairs and managing partners.

Flowers started rolling in from leaders around the country. And more email messages: "Congratulations," "What can we do to help you?" and "We're here for you."

"I was so struck and felt immediately blanketed with support and affinity in a very visceral way," Jones said.

By the end of the year, Jones found herself sitting in a Manhattan restaurant with a dozen of those leaders, including Koopersmith and McKeon. Several had flown in from across the country. The talk focused on the different challenges of transitioning into the new role, with the other leaders sharing their personal stories.

"A lot of conversation was about personal styles, from everything from taking on tricky partner questions to thinking about how you manage to have some semblance of sanity in your family life," Jones said. "It was people's openness I found quite striking in all of them. I would have been happy for it to have gone on for eight hours if people had the time."

The group broke up around midnight, when the restaurant closed.

For some women, it's when the gender splits among equity partners are closer to the 50-50 split seen coming out of law school.

For others, it's when the industry sees more women in positions of power: holding seats on executive or finance committees, wielding equity partnership votes, first-chairing trial teams, and bringing in the biggest books of business.

Generally, most agree that true equality will come when women and the industry can stop asking if there are enough women at the table.

"When you don't think about it anymore," said Lieberman, the Traub Lieberman managing partner. "It's when the people around the decision-making table don't turn around and start counting."