LGBT Pride: Weighing The State Of Equality In The Law

Law360 (June 1, 2018, 4:06 PM EDT) -- Every June, rainbow flags decorate storefronts and apparel across the U.S. in celebration of LGBT Pride Month. As the anniversary of the U.S. Supreme Court's trio of landmark LGBT rights rulings approaches, LGBT attorneys and legal industry leaders spoke with Law360 and shared what they think the industry does well and what it can do better for those within its ranks.

LGBT Pride Month typically commemorates the anniversary of the Stonewall riots in New York City, which began on June 28, 1969, in response to routine police raids on gay bars.

Three of the most important U.S. Supreme Court rulings for the gay rights movement have all come down during the celebratory month on June 26.

2003: In Lawrence v. Texas, the justices invalidated anti-gay sodomy laws across the nation.

2013: In U.S. v. Windsor, the high court partly struck down the federal Defense of Marriage Act.

2015: In Obergefell v. Hodges, the Supreme Court held that marriage is a fundamental right supported by the 14th Amendment, regardless of gender.

According to the National Association for Law Placement, the number of openly LGBT attorneys has largely been increasing since the educational association began compiling the data 15 years ago.

The association reported in January that based on data covering nearly 101,000 attorneys and 6,200 summer associates, the overall percentage of openly LGBT attorneys reported in its Directory of Legal Employers in 2017 grew to 2.64 percent, up from 2.48 percent in 2016.

While those numbers may seem small, Gallup in January 2017 reported that a little more than 4 percent of the U.S. adult population identified as LGBT in 2016, with that number also steadily increasing.

The NALP's numbers may not be entirely representative of the nation, but law firms at least appear to be leading the pack in terms of embracing LGBT employees. For example, in November, the Human Rights Campaign said that almost 80 percent of law firms surveyed for the 16th edition of the Corporate Equality Index scored perfectly on the LGBT equality benchmark, the highest rate of any industry.

American Bar Association President and Greenberg Traurig LLP Co-President Hilarie Bass told Law360 that the industry has had a long-standing commitment to diversity within its ranks, and that includes LGBT attorneys.

"There's a recognition among most in the legal industry as to the importance of the diversification of our entire profession, and it adds real value both to the people in it as well as to the level of our confidence that citizens have in our justice system when it's more reflective of our population," Bass said. 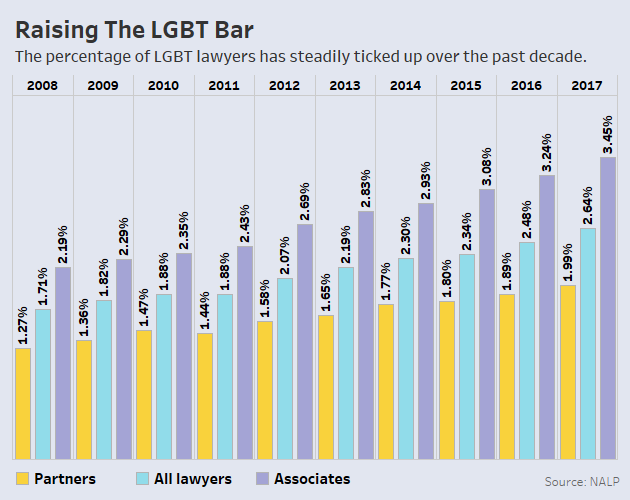 How Lawyers Helped Lead the Fight for Equality

The American Bar Association, law firms and even law students threw their weight behind marriage equality before the Supreme Court three years ago, ahead of the high court's ruling that recognized same-sex marriage as a fundamental right in Obergefell v. Hodges.

In its March 2015 brief in that case, the ABA argued that its hundreds of thousands of members had to represent same-sex couples in parenting, health, tax and end-of-life decisions that were being hindered by laws that the organization argued violated the equal protection clause of the 14th Amendment.

In their own brief that March, a group of LGBT law student organizations from schools including Columbia University and Harvard University argued that so-called nonrecognition laws could hinder their legal careers.

Brad Malt, chair of Ropes & Gray LLP, which had a key role in the fight for marriage equality, had a simple answer for why his firm got involved in the fight.

"What could be more profound than the landmark civil rights decision of our generation?" he said.

The key to continuing that commitment to diversity and inclusion, Malt added, is sending a message from the top that diversity is a priority.

"The fact that Obergefell was decided doesn't mean things are over," he said.

How the Times Have Changed

For firms where messages of acceptance aren't just lip service, the effect on LGBT attorneys, and what they bring back to the firm, can be extraordinary.

DJ Healey, a senior principal at Fish & Richardson PC, told Law360 the support she received from her firm when she came out as transgender in July 2017 had a profound effect on her and her practice.

"Fish really was very proactive and supportive in that I told them that I wanted to come out and we worked together to figure out 'OK, here are all the things we need to do and people we needed to call,'" said Healey, a patent and antitrust attorney.

The firm worked with her to make sure she was properly covered under their insurance, helped her come out to clients and even held trainings in the office before her first day fully presenting at work as a woman, Healey said.

Things have not always been so progressive in the industry, however. Several attorneys shared older stories with Law360 that show how some firms and organizations weren't as LGBT-friendly as they are now.

For Thomas Gaynor, managing partner of Nixon Peabody LLP's San Francisco office, his reality check came years ago during the job hunt when he was moving back east to be with family in the early 2000s.

After spending eight hours interviewing with dozens of people at a firm that Law360 has agreed not to name, Gaynor said his recruiter called him to tell him that the firm would be making an offer that day.

That offer fell through when he mentioned his husband, however, Gaynor said.

While he ultimately found a job with Morrison & Foerster LLP, he said the incident made him redouble his efforts to fight for his community, harking back to his days as a political fundraiser for the Human Rights Campaign.

But in a sign of how far the industry has come, Gaynor said Nixon was conversely very eager to help him start StartOut Growth Lab, a startup incubator aimed at LGBT-founded or co-founded businesses.

Connie J. Vetter, who runs her own law firm in Charlotte, North Carolina, said she faced some pushback of her own when she wanted to hold a continuing legal education program focusing on LGBT law in the late 1990s.

While a local bar association was excited about the idea, she said, there was some hesitation when it came to branding and naming the program out of fear that association members would withhold their dues.

A decade later, however, the bar association circled back with her and asked her to put the program on again — this time without qualms about how it was advertised.

How the Legal Industry Can Still Improve

For the legal industry to accept and embrace LGBT attorneys within its ranks, BakerHostetler partner Ted Jacobs said that firms need to actively invest in them more than they already do.

"We need to be deliberate in looking at who we have rising in the ranks, and we need to make a concerted and determined effort to be invested in their success and be particularly mindful of attorneys in the pipeline who may be women, LGBT or other minorities," he said.

He also touted the mentorship he received and affinity groups he was a part of in law school as key ways for the industry to elevate its minority members. His mentorship and support came at a time when the industry, as he put it, might not have been entirely welcoming of openly LGBT attorneys. The advice he received is still relevant today.

"There might be situations when your resume, which identifies you as an LGBT person, might not be received well, but in that case — is that a place you want to work?" he said. "That's certainly not a place that's going to invest in you if you do get the offer at the end of the day. Not a good fit, move on."

Recognizing that not everyone has the luxury of turning down a job, he added that law students have leverage that they might not understand, as law firms currently face a "buyer's market."

"Law students have a lot of power to demand that their employers provide inclusive, supportive places for LGBT attorneys and other minorities, and that's important," Jacobs said.

Meanwhile, although the private bar is making some progress on diversity and inclusion, the judiciary has some ground to cover. According to the Minority Corporate Counsel Association, there are only 10 active openly LGBT federal judges on the bench, and one with senior status.

In September 2013, U.S. Circuit Judge Todd M. Hughes became the first openly gay federal appeals court judge in U.S. history when the U.S. Senate voted 98-0 to approve his nomination to the Federal Circuit. The state of New York, which has three of the 10 non-senior openly LGBT federal judges, got its first openly LGBT Court of Appeals judge when Associate Judge Paul G. Feinman was confirmed by the state Senate last June.

By and large, both Malt and Bass said, the legal industry has been particularly good at welcoming diverse attorneys, whether they be LGBT or members of other minority groups.

The challenges LGBT attorneys face, Bass added, are the ones African-American, female and other minority attorneys also struggle with. And a legal organization that is not welcoming to those attorneys puts itself at risk.

"First of all, you're not going to get the best law students in law firms that are not perceived as being open to diverse lawyers," Bass said. "Second, there is a significant percentage of clients who consider this in their hiring decisions, and given the competitive environment, I don't think anyone can choose to walk away from what their clients are saying."

How to Give Transgender Attorneys a Chance

And transgender attorneys have their own unique hoops to jump through to make it in the legal industry, said Ezra Young, an openly transgender man and former director of impact litigation at the Transgender Legal Defense and Education Fund, and law firms need to be especially mindful of those hoops and work to take them down.

Young said a lack of guidance and mentorship in the industry and an overall "pipeline problem" can be fatal to the careers of otherwise intelligent attorneys.

"A lot of times, to be quite honest, it's very difficult for someone like me to get to lead a case because you don't get exposed to the experiences you need so that you can handle the case," he said. "You never handle the deposition, you never write the brief, you never talk to a client. Those sorts of barriers and slights build up over time."

His boutique practice has had him file briefs before federal district and appeals courts, including the Supreme Court, and agencies such as the U.S. Department of Health and Human Services and the Equal Employment Opportunity Commission, according to his website, and he said that his success doesn't mean he didn't need "a ton of help."

Overtly or otherwise, firms and legal organizations need to be proactive at showcasing their commitment to equality, and that goes hand in hand with examining their infrastructure — such as benefits, leave policies and training — to make sure transgender employees "don't fall through the cracks," Young said.

Making workplaces welcoming for LGBT and minority attorneys doesn't always have to be obvious and overt or as loud as a pride celebration, Young said. It can be as simple as giving people a seat at the table.