Taking On The 'Petri Dish' Of BigLaw Bias

Attorneys lingered in the hallways, stunned and excited, immediately after the March seminars, partner Myra Selby said. They still talk about it months later. Some of the partners who had previously seemed unengaged in diversity efforts have been transformed into believers.

"There was an immediate energy and buzz about what just happened," said Selby, who leads the firm's diversity and inclusion programs. "It was clear that there had been at least a layer or two of the onion peeled off and an interest in going deeper."

Ice Miller is among many corporations and BigLaw firms to embrace training to combat unconscious bias, hopeful that it could boost the diversity and cohesiveness of the workforce where traditional training has stalled or fallen short. Starbucks, for example, recently shut down its cafes for an afternoon to put its employees through this type of training in response to racial bias protests set off by the arrest of two black men at a Philadelphia store.

Such training operates on the idea that everyone harbors deeply ingrained biases that they might not even know about or fully understand.

It could be the tendency to find an assertive woman abrasive, or to expect an Asian-American to be passive and nonsocial, or an African-American to be angry or aggressive, according to the University of California, Hastings Center for WorkLife Law. Or it could be something more subtle, like the assumption that employees without kids should be workaholics because they don't have anything else going on in their lives.

These create a chain of inequalities, from hiring to salary and promotion decisions, that favor people most similar to the decision makers — even if those decision makers are trying to be fair. Law firms are particularly susceptible to bias in some important areas, such as salary and raise negotiations, experts say. These sometimes-informal discussions are loaded with subjective calls, leaving plenty of opportunity for unconscious bias to creep in.

"That's kind of a petri dish for bias, and it's never been solved," said Joan Williams, a UC Hastings professor and founding director of the Center for WorkLife Law.

Diversity consultant Kathleen Nalty has recently led training sessions aimed at unconscious bias at Ice Miller and some other large firms. She "gamifies" the process, putting participants into the shoes of decision-making partners considering staffing matters. But she keeps the details about the exercise close to the vest to avoid spoiling the "gut-punch" revelation at the end.

"It reveals in a fun and engaging way some very deep truths about what happens below the surface in law firms," she said. "These hidden barriers are held firmly in place by good, well-intentioned people who have no idea how they are contributing to these hidden barriers."

Researchers say everyone has biases — including biases they did not purposely or even consciously adopt. That's where "bias interrupters" come in. 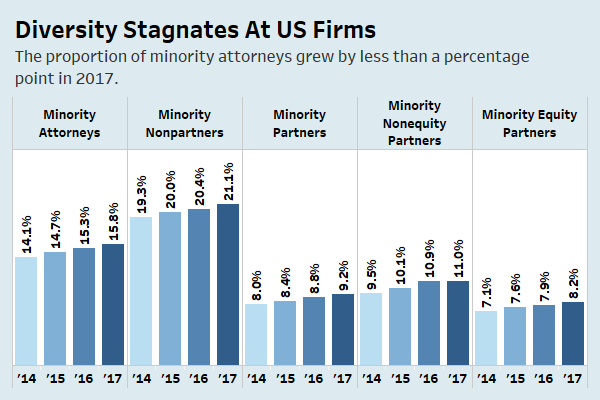 Because unconscious biases are insidious, individually varied and difficult to root out, it can make more sense to target systems instead. Tweaking policies and procedures can subtly correct for bias — or force decision makers to confront their biases.

The Mansfield Rule is a prime example of such an interrupter, Nalty said.

Firms that adopt the rule agree to ensure that at least 30 percent of candidates for any position are women or racial minorities. This puts a greater variety of people before hiring committees, including some candidates who might otherwise never have made it that far, and it gives hiring managers an opportunity to consciously confront their unconscious biases.

The Center for WorkLife Law at UC Hastings has created a website about bias interrupters, http://biasinterrupters.org, which is filled with guides and research on the subject. Williams, its founding director, calls the site an "open-source toolkit" for bias-interruption training.

Bias often comes into play during seemingly mundane judgment calls — for instance, determining whether a job candidate has enough experience.

A 2003 National Bureau of Economic Research study found that job applicants named "Jamal" were often judged far less qualified than applicants named "Greg" — despite the fact that their resumes were otherwise identical. A similar study in 2012 found that "Jennifer" was offered a lower salary than "John" for academic science jobs.

The research indicates that decision makers tend to judge people who come from ethnicities and backgrounds similar to their own on their potential, whereas those from outside that group tend to be judged based on their actual accomplishments. Even then, outsiders are judged less generously, as the decision makers can still chalk up some feats to luck.

One of the ways WorkLife Law recommends solving that problem is by committing to a set of requirements for entry-level and lateral hiring, requiring an explanation of any deviations from those requirements, and tracking who benefits from any waivers. But even if firms take steps to root out unconscious bias at the hiring phase, it can continue to come into play once the employee is on board.

Female attorneys and attorneys of color can face "prove-it-again" bias — that is, they must constantly prove their competence. This translates to having to try twice as hard to get half as far. They might also be subjected to the "tightrope" bias, Williams said. They're expected to pull off an impossible balancing act between ambition and being a team player.

"Women and people of color are invited into high-level, professional jobs, but often with the expectation that they will play a very specific role once they're there — a sort of helpful team player, and not as a go-getter at the front of the action," she said. "People of color, as well as women, who try to play that more central role often get faulted for personality problems."

The problem is compounded even further for women of color, and particularly for those who become working mothers.

Each of these sets of biases is different and complicated, and most current diversity training fails to account for that, according to Williams. She aims to keep her training practical, straightforward and solution-oriented, rather than problem-oriented.

"This is a technical problem that can be solved by intelligence," Williams said. "We're not discussing whether we're good people or not. This is not an evangelical meeting. These are workplace interactions. We need to restructure them. You're a smart person. You tell me how you're going to do it."

Academics, including Williams, warned that the quality and substance of the training can vary widely, though. Without concrete measurements and goals, and evidence-based solutions in place, training alone would likely fall short of its aims, they said. And some people offering these types of courses have little or no scientific background and could be preying on businesses that don't know better.

Patrick Forscher, an associate professor of psychology at the University of Arkansas, said he has wanted to believe in unconscious-bias training. But after studying the matter, he found he had no choice but to join a growing chorus of critics in academia.

"There's not much evidence one way or another whether it's effective," he said. "If I were advising people whether this is a good idea, I'd say, 'No way.'"

He pointed to the recent and highly publicized training at Starbucks, saying the company doesn't appear to have evaluated the program's success. Starbucks provided some basic information about its program but did not respond to Law360's request for clarification about the scientific data underpinning its training or for comment from those who put the class together.

Forscher lauded companies and law firms that take a measured, data-driven approach to making firms better able to hire and retain diverse talent. He said that in general, companies and firms should undergo continuous evaluation and adhere strictly to well-defined policies if they really want to make change — a point Williams also made.

"I'm not optimistic that there's a one-size-fits-all solution that every company should adopt," Forscher said. "I don't think that's the way the world works."

At Dickinson Wright PLLC, firm leaders have over the last couple of years been working with information technology staff to compile data about every six months about how the firm operates in terms of diversity.

"It's extremely cumbersome, let me tell you," said Katheryne Zelenock, chair of the firm's real estate finance practice and leader of its diversity boosting efforts. "It takes a lot of access to a lot of data and then somebody who can crunch it in a way that makes sense."

For instance, the firm has explored how its rainmakers assign work to other attorneys at their offices and practice areas in their cases. While most assignments reflected the diversity in each area, some rainmakers who are white men tended to work disproportionately with other white male attorneys, she said.

Some discoveries led to discussions about how the firm forms teams and allocates generation credit for major cases. In some cases, it seemed, diverse attorneys may have been involved in pitching a client but left off the team.

As the firm learns more from the data, it works to disrupt the biases, Zelenock said.

For example, attorneys preparing to retire have often groomed successors who looked much like themselves. The firm, armed with data, has begun gently suggesting to veteran attorneys that they might instead consider passing along their work to an equally or better-qualified female or minority attorney, Zelenock said.

In two cases so far, the attorneys in the later stages of their careers decided to go with the female or minority candidate and have been pleased with the outcome, she said.

Dickinson Wright is also weighing how it handles associates in their first through third years, forcing them to rotate through departments to expose them to more attorneys and prevent favoritism from developing early on. But that has proven complicated; the firm benefits when associates develop expertise in an area.

But Zelenock said she noticed something peculiar happen after word got out that management was carefully tracking data markers of bias throughout the firm: People began competing to improve their numbers because they knew someone was paying attention.

"We're trying. We really are trying," she said. "Part of overcoming unconscious bias is just consciously trying. That really does have impact on people. Even if you miss on something, people just knowing you're working on this on a regular basis does good. It creates a lot of goodwill to make the attempt. It's even better to have some successes, which we have."

Methodology: Law360 surveyed over 300 U.S. firms, or vereins with a U.S. component, about their overall and minority headcount numbers as of Dec. 31, 2017. Only U.S.-based attorneys were included in the survey, and firms had to have at least 20 U.S.-based attorneys to participate. Some attorneys declined to self-identify.