When Partisan Passion Raged, Kennedy Was The Vote To Get

Justice Kennedy's position at the court's ideological center gave him a level of influence on its jurisprudence that is rare for any single member of the nation's top bench.

"I think he'll be remembered as one of the most consequential justices of all time," said Matthew Lembke of Bradley Arant Boult Cummings LLP, who clerked for Justice Kennedy during the October 1992 term. "For his entire 30-year tenure, he sat in the middle of the court and his vote was critical in virtually every major case during that entire time period."

Among his most notable opinions are Obergefell v. Hodges, recognizing a constitutional right to same-sex marriage, Citizens United v. Federal Election Commission, striking down federal limits on independent campaign expenditures by corporations, and Roper v. Simmons, abolishing the death penalty for crimes committed under the age of 18.

"He's the fifth vote, and they need his vote," said Adam Charnes, a partner at Kilpatrick Townsend & Stockton LLP and Lembke's fellow Kennedy clerk during the October 1992 term. "They need to shape the opinion in a way that will attract him and he'll agree with. That's given him enormous influence and power of the court's jurisprudence."

Like former Justice Sandra Day O'Connor, Justice Kennedy had a habit of "joining conservative decisions but moderating them," leaving a legacy that is "somewhat complex," Charnes said.

Justice Kennedy, who joined the court in 1988 after serving on the Ninth Circuit, delivered his first major LGBT rights opinion in the mid-1990s when, writing for the majority in Romer v. Evans, he helped strike down a Colorado state constitutional amendment denying protected class status to LGBT individuals.

Justice Kennedy also wrote for the majority in the 2003 case Lawrence v. Texas, scrapping that state's anti-sodomy law as unconstitutional. In 2013, in U.S. v. Windsor, he held that a provision of the federal Defense of Marriage Act defining a marriage as between a man and a woman was similarly unconstitutional.

The Ronald Reagan appointee then delivered what is widely considered to be the capstone of his LGBT jurisprudence in Obergefell v. Hodges, the 2015 decision that recognized a constitutional right to same-sex marriage and had the effect of striking down bans on the practice in various states across the country.

"No union is more profound than marriage, for it embodies the highest ideals of love, fidelity, devotion, sacrifice and family," Justice Kennedy wrote in the majority opinion in his trademark sentimental prose. "It would misunderstand these men and women to say they disrespect the idea of marriage. Their plea is that they do respect it, respect it so deeply that they seek to find its fulfillment for themselves."

His standing on LGBT rights met perhaps its toughest test during the October 2017 term with the case of a baker who was disciplined by the state of Colorado for refusing to make a custom cake for a same-sex couple's wedding reception. In Masterpiece Cakeshop v. Colorado Civil Rights Commission, many had expected him to rule in favor of the baker's First Amendment argument that the state couldn't force him to express a message that violates his religious beliefs.

In response to Justice Kennedy's retirement, American Civil Liberties Union Legal Director David Cole praised him as a "critical moderating force" whose "greatest legacy may rest with his decisions recognizing the dignity and rights of lesbians, gay and bisexual people."

But some LGBT rights groups seized on Justice Kennedy's decision in Masterpiece, and the likelihood of President Donald Trump naming a more conservative replacement, to call that legacy into question. "We are shocked and saddened that a justice who was once the defender of dignity for LGBT people and our families on the court would chose this moment to hang up his robe and give the Trump administration the opportunity to further derail anti-discrimination laws and undermine the rule of law," said Rachel B. Tiven, CEO of the advocacy organization Lambda Legal.

Justice Kennedy's influence over the court's First Amendment jurisprudence, whether having to do with free speech or religious freedom, is equally exhaustive, if less well-known.

"Kennedy was the strongest defender of the First Amendment that the court has probably ever seen, whether in the context of political or artistic expression made by students, workers or any citizens," said Ilya Shapiro of the libertarian Cato Institute.

In one of the last opinions of his Supreme Court career, Justice Kennedy wrote a concurrence in Trump v. Hawaii, a case over the president's travel ban, to admonish government officials to respect the First Amendment's clause prohibiting the establishment of religion.

And on Wednesday, the day of his retirement announcement, Justice Kennedy joined the court's conservative wing to rule that so-called fair share fees in public-sector unions, those collected from nonunion members, violate the First Amendment.

He wrote perhaps his most famous First Amendment opinion in the landmark 2010 Citizens United case, holding that federal limits on money that corporations and labor unions could spend in connection with political campaigns were unconstitutional. And last term, Justice Kennedy concurred in the court's 8-0 Matal v. Tam decision, saying that a provision of the Lanham Act barring the registration of disparaging trademarks constituted impermissible viewpoint discrimination by the government.

"We've got into this situation, which is kind of unique or unusual historically, where the conservative wing of the court is the one that has the most expansive view of free speech protections, and Justice Kennedy on this court has had the broadest view of free speech rights of any justice," Charnes said. 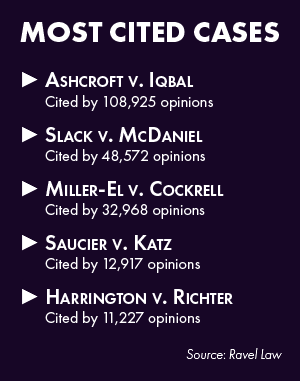 Conservatives had sought for years to dismantle Roe v. Wade, even making it the central issue of Justice O'Connor's confirmation proceedings, and Justice Kennedy's vote to preserve the "essence" of the decision was described in contemporary press reports as a major surprise.

Justice Kennedy also wrote the court's 5-4 opinion in Roper v. Simmons, making it unconstitutional to sentence people to death for crimes committed before they were 18. His opinion pointed out that even the authoritarian regimes of China, Saudi Arabia and others had abandoned the practice, leaving the U.S. to stand "alone in a world that has turned its face against the juvenile death penalty."

But if observers get the general feeling that Justice Kennedy is equal parts liberal and conservative, said his former clerk Charnes, that is because he tends to be more moderate in front-page cases.

"In the run-of-the-mill docket on the Supreme Court, he was a pretty reliable vote with the conservative justices," he said.

Justice Kennedy voted with his fellow Republican appointees in case after case during the October 2017 term, refusing to side with his liberal colleagues in a single 5-4 decision. By contrast, the arguably more conservative members of the court, including Justice Neil Gorsuch and Chief Justice John Roberts, did so several times.

In cases dealing with class action waivers, unions and even the process of challenging patents laid out in the America Invents Act, Justice Kennedy ended up on the opposite side as Justices Ruth Bader Ginsburg, Elena Kagan, Stephen Breyer and Sonia Sotomayor, the court's Democratic appointees.

"He was generally conservative on most issues but was willing to use the power of the court to in an aggressive way to restrain the government in certain areas," Charnes said.

Still, the justice's retirement announcement was met with widespread excitement from Republicans in Washington on Wednesday, while Democrats largely reacted with consternation about who might be replacing him.