Law360 (June 28, 2018, 9:31 PM EDT) -- The retirement of Justice Anthony Kennedy means that Chief Justice John Roberts is now the U.S. Supreme Court's most important member not just in title but also in reality, empowering him to advance a muscular conservative agenda and perhaps broker deals with outgunned liberals. 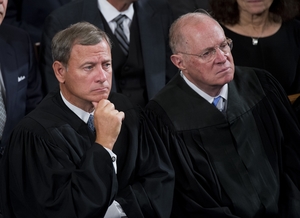 Justice Kennedy's historical role as a crucial swing vote led some observers to assert that Justice Roberts has been the titular head of what was really "the Kennedy court." Now, Justice Roberts is undeniably the court's captain.

He still wields the authority to assign opinions when he's in the majority. And now, if a rock-ribbed conservative replaces Justice Kennedy, the chief justice will probably be the court's closest thing to a swing justice, arming him with decisive votes in hugely consequential cases.

"Being both the median justice and the chief justice is an extremely powerful position to be in. It's something that has happened very rarely," said Daniel Epps, a Washington University School of Law associate professor who clerked for Justice Kennedy. "And so he has the power to really be the shaping force on the court for a generation or so. If it wasn't the Roberts court before, it is now."

Still, experts cautioned that Justice Roberts is unlikely to become a genuine swing vote. He may soon have four justices to his left and four to his right, but that won't make him a centrist.

"He is a mostly conservative jurist, and probably he will vote the way he voted up until now," Paul Hastings LLP partner Igor Timofeyev, a former clerk to Justice Kennedy, told Law360.

Justice Roberts has occasionally sided with the court's progressives in 5-4 decisions that elicited strong dissents from conservatives, including Justice Kennedy. He did so six years ago by saving the Affordable Care Act, and he did so this month by blocking warrantless access to cellphone location records.

"I don't think he's shifted toward the middle at all," said Eric Segall, a constitutional law professor at the Georgia State University College of Law. "I think that's a myth."

The absence of an honest-to-goodness swing vote in major cases would be unusual in the Supreme Court's recent history. Justice Lewis Powell, who served from 1972 to 1987, and Justice Sandra Day O'Connor, who served from 1981 to 2006, were both conservative-leaning swing votes who at times endorsed abortion rights and affirmative action, as did Justice Kennedy.

"I think there's absolutely no cause for optimism," Segall said.

The future of abortion rights, in particular, is getting attention as Justice Kennedy bids the court farewell. It is widely expected that red states will soon pass aggressive new limits on abortion in hopes of persuading the Supreme Court to overrule its 1973 decision in Roe v. Wade.

Justice Roberts has voted multiple times to uphold restrictions on abortion. With Justice Kennedy gone, he may well vote for eliminating Roe's nationwide guarantee of a right to abortion, some observers say.

"This is really what the conservative legal movement has been about, is getting Roe v. Wade off the books," Epps said. "So it would really very much surprise me if Chief Justice Roberts didn't have the gumption to vote to overturn it."

Others doubt that the chief justice would be so bold, pointing to his oft-stated concern for the Supreme Court's institutional legitimacy.

"Even though on paper they might have the votes to, say, overrule Roe v. Wade, I just don't see him doing that," Ernest Young, a constitutional law professor at Duke Law School, told Law360.

In general, experts say Justice Roberts may be wary of overplaying his hand, and that he may also be chastened a bit by the spotlight that shines on a quasi-swing vote.

"It may push him to be slightly less conservative — to sort of really situate himself at the middle," Epps said.

To boost the court's credibility, the chief justice might increasingly lobby the court's liberals — primarily Justices Stephen Breyer and Elena Kagan, who are more moderate than Justices Ruth Bader Ginsburg and Sonia Sotomayor — to join conservative-leaning opinions, even if that means issuing narrower decisions.

"I expect Roberts to swing left only occasionally ... and to find common ground with Kagan and Breyer when possible to avoid some big rulings," said Richard Hasen, an election law expert at the University of California, Irvine School of Law.

There have been a handful of important cases in which Justices Breyer and Kagan broke ranks with fellow liberals and sided with conservatives. For example, they joined a 7-2 decision this month that found a baker was subjected to anti-religious bias after refusing to bake a wedding cake for a gay couple. In addition, they agreed with five conservatives in 2012 that the ACA's Medicaid expansion could not be mandatory.

By putting their own votes in play like that, the liberal justices could encourage the chief justice to reciprocate.

"One thing that Breyer understands, and that I'm sure Kagan understands too, is that it's hard to compromise if you feel like the other side is never compromising," Young said.

"I think there is a serious gap between where Roberts is on the one hand and where Kagan and Breyer are on the other," Hasen said.

With that in mind, it seems certain that the high court's right flank will notch more wins than losses for the foreseeable future.

At the same time, there could still be plenty of moderate or even liberal decisions, should Chief Justice Roberts — perhaps joined by Justices Breyer and Kagan — seek to keep Justice Kennedy's maverick ways alive.

"It's almost as if the justices feel like somebody's got to be a swing vote — that that's a role that needs to be filled," Young said. "I think there will be a center even after Kennedy's gone."