Should Pot Be Patented? Inside A Pending IP War

Law360 (August 31, 2018, 8:07 PM EDT) -- A patent infringement lawsuit filed in Colorado federal court this summer could be the first salvo in a looming intellectual property war over cannabis, the specter of which is already dividing the industry into separate camps based on one key question: Should pot — and its derivatives — be patented?

On one side of the divide is United Cannabis Corporation, or UCANN, a Colorado company focused on developing cannabis for medicinal use. On July 30, UCANN sued wellness company Pure Hemp Collective Inc. for selling a non-psychoactive 2-ounce cannabidiol, or CBD, tincture — used for pain relief and other health benefits — that allegedly infringes UCANN's U.S. Patent Number 9,730,911 on liquid cannabinoid formulations containing 95 percent CBD.

The case is believed to be the first cannabis-related patent infringement lawsuit ever filed in federal court, according to John Mansfield, a Harris Bricken attorney who focuses in cannabis intellectual property. Mansfield told Law360 in May that nobody had ever tried to enforce a cannabis patent because the use and sale of marijuana — a Schedule 1 drug, considered by the federal government to have a high potential for abuse — is a federal crime.

If pot patents are widely enforced, it could radically affect what kinds of marijuana are available to be bought and sold.


"If I draft a complaint in federal court saying that 'I practice my own pot patent by growing marijuana,' am I admitting a federal crime?" he said in May, chuckling.

But that was before the U.S. Food and Drug Administration approved GW Research Ltd.'s CBD-based epilepsy drug Epidiolex in June, marking the first time the federal agency signed off on a drug comprised of a marijuana-derived active ingredient. A GW representative told Law360 it is expected to be available by prescription this fall.

According to Barbara Carreno, a press officer with the U.S. Drug Enforcement Administration, the FDA's approval of Epidiolex requires her agency to reschedule "something" — not necessarily marijuana as a whole, but possibly FDA-approved CBD-containing drugs or just Epidiolex itself.

"If something has an accepted medical use, it has to go in one of the other categories," Carreno said. "We are required within 90 days to move that from a Schedule 1 — where CBD is now as an extract of marijuana — to one of the other schedules."

UCANN cited the FDA's approval of Epidiolex in its July 30 complaint over the '911 patent, saying that the ensuing reclassification "will likely occur by the end of September."

"In light of the FDA's and DEA's recent guidance on CBD ... UCANN views its patent on CBD-based therapeutics in the same category as other patents covering Schedule III, IV, or even Schedule V compounds that offer proven medical benefits and low or no potential for abuse or dependence," said Jesus M. Vazquez, UCANN's general counsel. "For those reasons and others, we believe our ['911] patent can be enforced in federal district court."

When Mansfield heard the news, he said that the groundbreaking suit could mark the start of "a brave new world."

"But if pot patents are widely enforced," Mansfield added, "it could radically affect what kinds of marijuana are available to be bought and sold."

A "brave new world" that involves patent litigation is a frightening thought for growers like Jesse Peters, who believe that marijuana plant intellectual property should be in the public domain.

An original member of the Oregon Cannabis Association and co-founder of the marijuana grow entity Eco Firma Farms, Peters has been around the industry since birth; his operation has cannabis farms a mile down the road from the cannabis-friendly house where his parents raised him.

The truth is, most cannabis varieties should be in the public domain. They've been around for a long time. And even ones that are new, most of them probably aren't novel enough to get a patent anyway.

After Oregon legalized the plant for medical purposes in 1998, Peters and his wife, Kate, decided to start a small grow operation in their basement. The basement turned into multiple basements, and then shops, and eventually, facilities that contain 54 different marijuana strains.

But because marijuana has long been a Schedule 1 drug, comparable to substances like heroin and LSD, Peters said he didn't start thinking about patenting plants or products until the past few years.

"The thought, 'Are people patenting strains?' stays in the back of your mind, and you carry on with work and don't think much of it," he told Law360.

His indifference stemmed from the fact that patenting marijuana used to be a dubious pursuit. Up until 13 years ago, patent applications could be rejected if an invention was considered "against public policy," according to Paul Fucito, press secretary at the U.S. Patent and Trademark Office. But the agency revised its manual for examining patents in August 2005, deciding that rejection should not be based on whether the invention is against public policy.

The change opened the door for marijuana growers and related companies to start filing for patents in larger numbers. Although the plant remains a Schedule I drug, there are currently more than 400 patents filed with keywords such as "cannabis," marijuana," "CBD" and "THC."

One of those patents, granted in August 2015 to a California company called BioTech Institute LLC, has broad claims on cannabis strains with CBD content greater than 3 percent that have a specific terpene, or chemical, profile. Considered the first utility patent on cannabis, BioTech's U.S. Patent Number 9,095,554 set off fears that the USPTO was granting overbroad patents.

Some experts have said the '554 patent and others in its family could cover more than half of the cannabis strains on the market today, which Peters said made him realize that "we're already in the thick of it." He cited Monsanto Co.'s grip on the patents of genetically modified crops as one example of how patents can affect competition in a growing industry.

"We need to really combat this now and not wait until the rug is pulled out from under us," he said.

Peters wasn't the only one thinking about ways to protect pot farmers from the kind of aggressive patent litigation that has taken place in the agriculture and tech industries.

The BioTech patent had also caught the eye of Mowgli Holmes, an Oregon geneticist who says that at one point he felt like the state's "only trained geneticist who was totally fine with smoking pot."

3 Pot Patents
People Are Talking About

U.S. Patent Number 9,095,554:
Registered by BioTech Institute, this utility patent covers cannabis strains with CBD content greater than 3 percent that have a specific terpene profile. Its issuance in 2015 caused a stir in the industry as people began to worry about overbroad patents locking up the market.
Granted: August 2015

U.S. Patent Number PP27475:
Registered by Cannabis Sativa Inc., this plant patent is considered one of two patents focused on vegetation, along with the '554 patent. Covering a variety named "Ecuadorian Sativa," it is considered less threatening because it has a narrower reach.
Granted: December 2016

The former National Research Service Award Fellow with a Ph.D. from Columbia University co-founded agricultural genomics company Phylos Bioscience in 2014, aiming to use genetics and computational biology to better understand what he calls "the least-studied plant in the world." His company provides analyses of its customers' plant genotypes, offering defensive IP in the form a time-stamped report and data that growers can use if they want to pursue a patent.

But according to Holmes, "the vast majority" of Phylos customers are content with defensive IP, and many even agree to make their plants' data public through the Open Cannabis Project, a nonprofit Holmes helped start shortly after launching his genomics company.

"The truth is, most cannabis varieties should be in the public domain," Holmes said. "They've been around for a long time. And even ones that are new, most of them probably aren't novel enough to get a patent anyway."

He noted that the OCP board includes the Electronic Frontier Foundation founder John Gilmore, considered a key contributor to the worldwide free software movement. Holmes said the parallels run deep between the early days of patenting software and the current era of patenting cannabis: in both subject areas, a dearth of prior art references contributes to the possibility of overbroad IP.

According to OCP executive director Beth Schechter, marijuana's longtime status as an illegal substance means the USPTO has less to examine when considering granting a patent.

"Ultimately, what everyone realized was, because of the lack of documentation about cannabis, for obvious reasons, we don't have enough information to tell us whether or not that patent is on a cultivars strain of cannabis that is truly novel," Schechter said.

As an example, Schechter pointed to the '554 patent's claims on terpene profiles — an aspect of cannabis that she said wasn't really being tested until 2013, around the time BioTech filed its patent.

"It's like they filed a patent without there being sufficient prior art for terpene quantities," she said.

The OCP aims to "to defend the richness and diversity of cannabis from overreaching patents" by providing a publicly available database of cannabis genetic information. According to Schechter, the repository of prior art documentation has an international audience, featuring samples from all over the world.

Peters said he has tried to rally other growers to join him in getting their strains analyzed and the resulting data posted, hoping to "make it just really difficult for anybody who's trying to corner us."

A Cooley LLP attorney who represented BioTech in acquiring the '554 patent said he did not have firm approval to comment on the matter. Representatives of the company — which has no website or products — did not respond to requests for comment.

For the most part, cannabis-related patents have been focused on methods to ingest the plant's active ingredients, or formulations like those covered by UCANN's '911 patent. Schechter said she only knows of two patents that cover actual marijuana vegetation: BioTech's '554 utility patent, and U.S. Patent Number PP27475, a plant patent covering a single plant variety named "Ecuadorian Sativa," which growers consider less threatening due to its narrower scope.

Cannabis companies can also pursue registration under the Plant Variety Protection Act, but Schechter said the U.S. Department of Agriculture requires a seed deposit in order to grant certificates. Because depositories won't currently accept cannabis seeds, she said, "No certificates for cannabis have been issued using this method yet." 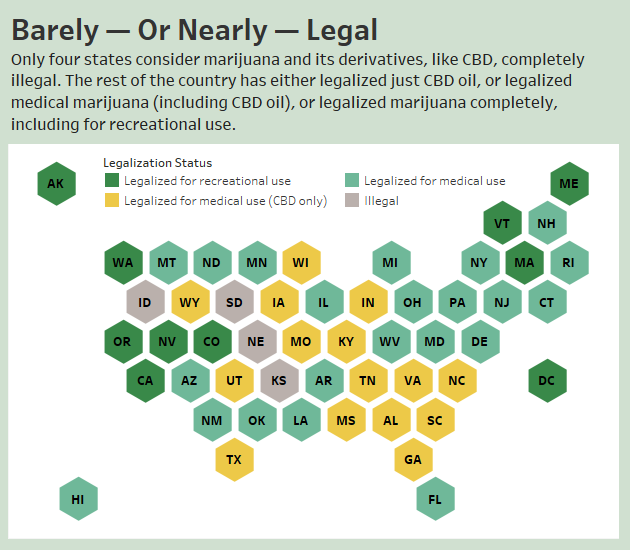 
Generally, Schechter said she meets a lot of cannabis growers who are averse to patenting plants. Holmes agreed, saying the vast majority of his Phylos customers "just want to do what they do and they don't want anyone else to come in and try to patent their stuff."

Peters counts himself in that camp, saying the amount of money and lawyers involved with patent protection "sounds like a really big fight" compared to the goodwill of "having our strains on the open market."

It's clear that BioTech Institute and UCANN have a different stance on the matter, and with only four states still treating the plant and its derivatives as completely illegal, more companies could join the fray. Peters said he thinks getting strains out into the public domain is the best option for growers to protect themselves from a world of weed lawsuits.

"Start getting your strains out there," he said. "This is a team effort … if we can make this all happen together then it makes [obtaining overbroad patents] a lot more difficult."