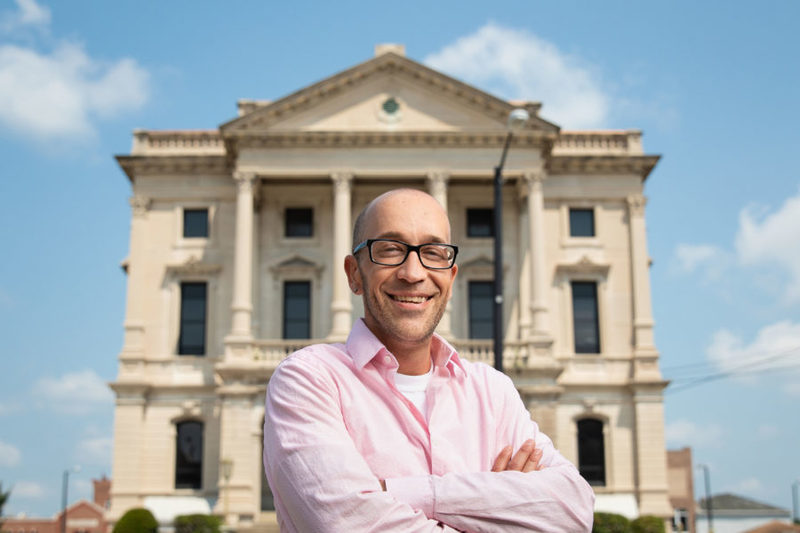 Tyson Timbs' fight to get his Land Rover back is putting the issue of state court fines, fees and forfeitures before the U.S. Supreme Court, in a case that asks whether they can violate the Eighth Amendment's protections against excessive fines.
(Photo: Institute for Justice)


A convicted drug dealer's fight to recover his seized Land Rover will allow the U.S. Supreme Court to wrestle with a boom in property and cash taken through state civil forfeiture actions that some advocates say is hobbling people with criminal records as they try to move on with their lives.

On Nov. 28, the high court will hear arguments in Tyson Timbs' case against the state of Indiana. According to Timbs and others in his corner, the heavy financial consequences of a criminal charge or arrest, in the form of not only fines and fees but also forfeitures, can clash with the Eighth Amendment's protections against excessive fines.

Additionally, the burden of those penalties on criminal defendants disproportionately falls on low-income and minority Americans, according to groups like the American Civil Liberties Union and the Southern Poverty Law Center that have joined the case as amicus participants. These advocates hope the high court makes it easier to challenge forfeiture actions as disproportionate to the underlying crime.

For Timbs, losing his car has made it difficult for him to get to work and probation appointments, according to Wesley Hottot, an attorney with the Institute of Justice who will be arguing for Timbs. For others, forfeitures, fees and fines — and their compounding charges as people struggle to pay them — have led to hurdles such as driver's license suspensions, revoked probation and jail time, according to advocacy groups.

Indiana has countered that protections against excessive fines don't apply to state civil forfeiture actions and that such takings have a long history. Municipal groups have also stepped forward to support Indiana, contending that forfeiture is a valid form of punishment for those who break the law.

But, in the view of Hottot, slapping people with fines and fees or taking their property as they try to rejoin society has disturbing similarities to the system that kept freed slaves in debt servitude.

Quoting a 1914 decision by the high court against such peonage, Hottot said, "If you're tying people to what's been called 'an ever-turning wheel of servitude,' they're not going to be able to get their life straightened out."

Tyson Timbs goes before the high court at a time when civil asset forfeiture — which allows law enforcement to seize property believed to be part of a crime in a civil action separate from any criminal case — is bringing in billions in revenue for state and federal governments.

The federal Asset Forfeiture Fund took in about $1.6 billion in gross forfeiture revenue last year, including both cash and proceeds from the sale of seized cars and other property, according to a U.S. Department of Justice inspector general audit. That's down from $1.9 billion in 2016, the report said.

Those numbers are among the highest ever in the 30 years since a change in federal drug laws allowed the federal government to pocket property seized as part of a crackdown on criminal activity, experts say.

At the state level, civil forfeiture has also boomed, according to a study done by the Institute for Justice. All states allow some type of forfeiture, and for the 14 states the institute looked at, forfeiture revenue more than doubled between 2002 and 2013. Local law enforcement have used the proceeds to fund government programs and equipment, provide restitution to crime victims and offset court costs, depending on state laws, according to the National Conference of State Legislatures.

While forfeitures have spiked, new fines and fees have popped up in the country's courts, according to Beth Colgan, an assistant professor at UCLA School of Law who was one of several professors who urged the high court to take Timbs' case.

Colgan, who has written several articles on the issue, says fees and fines have grown in popularity among local governments as they have sought to fund their law enforcement without raising taxes.

"A person might be charged for the cost of their public defender, a fee for a jury trial, the cost of the prosecution, [or] pretrial incarceration costs," Colgan said. "All of those can be added on top of each other."

The Case of Tyson Timbs

For Timbs, the issue of forfeiture became real when the state of Indiana seized his SUV after he was arrested for selling drugs.

He was living in Marion, Indiana, when his father died and he received just over $70,000 from a life insurance policy, according to court records. In January 2013, he used a large portion of the money — $42,000 — to buy a 2012 Land Rover LR2. But the loss of his father came at the same time he relapsed into an opioid addiction, and soon the rest of the money was spent on drugs, his brief said.

Timbs attracted the attention of police in 2013 after he had turned to selling heroin to fund his habit. An informant connected him with buyers, but the buyers turned out to be cops, according to the brief. On his way to a sale, Timbs was pulled over in his Land Rover and arrested. The car was seized.

Timbs ultimately pled guilty in 2015 to drug and theft-related charges. He was sentenced to one year of home detention and five years of probation and ordered to pay over $1,200 in costs and fees.

In the meantime, a private law firm contracting with the state of Indiana filed an action seeking forfeiture of the Land Rover. But the judge in that case said that although Timbs used the car in his crimes, forcing him to forfeit it would be a violation of the Eighth Amendment's ban on excessive fines.

"The amount of the forfeiture sought is excessive, and is grossly disproportional to the gravity of the defendant's offense," the judge said.

The Indiana Court of Appeals agreed. Although the U.S. Supreme Court has provided no guidance on whether the excessive fines clause applies to the states, the appellate court said its own precedent supported it.

But the Indiana Supreme Court reversed, saying the fact that the U.S. Supreme Court had not held that the excessive fines clause applies to the states meant it couldn't be used that way. Timbs turned to the nation's high court, which agreed to hear the case in June.

Timbs wants the high court to answer whether the Eighth Amendment's ban on excessive fines is incorporated against the states under the Fourteenth Amendment and its due process protections.

High courts in 14 states have chosen to incorporate the excessive fines clause, and both English and American laws seeking to protect citizens against excessive fines have been on the books for hundreds of years, Timbs has argued in his brief with the court. Fines, fees and forfeiture are simply another means of punishment in the criminal justice system, according to Timbs.

The state of Indiana is fighting to keep Timbs' Land Rover by arguing that the excessive fines clause was never meant to restrict civil forfeiture, which it says is an important tool to fight crime.

They cannot be treated like fees and fines, as Timbs wants them to be, his state argued in its high court brief, because courts have not considered them penalties for criminals but separate actions against property.

"Historically, even innocent owners could be subjected to civil asset forfeiture," Fisher said.

Civil forfeitures have been in use in America since before the Revolution, and in England before that, and it was only relatively recently that courts have been asked to consider whether they were subject to the excessive fines clause, Indiana has said.

And forfeitures have been harsh, allowing the government to seize entire ships or property that the owner didn't know was being used for criminal enterprise, according to Indiana. But while all of the states have their own bans on excessive fines, until 1920 no one sought to challenge the forfeitures under those laws.

The state courts that have since considered those challenges rejected them, as did several federal courts that came much later, according to the brief. It wasn't until 1992 that anyone used the excessive fines clause to examine a forfeiture, which Indiana said proves that almost no one has understood the clause to apply to them.

A group of nonprofit organizations representing the interests of local municipalities are backing Indiana, arguing in a brief that the purported historical evidence supporting Timbs' claim that the Fourteenth Amendment was intended to encompass the Eighth Amendment is too vague.

The organizations, which include the National Association of Counties, the National League of Cities and the U.S. Conference of Mayors, also note there is a long line of cases supporting the seizure of property used to commit a crime. Timbs hasn't challenged the evidence that his Land Rover was used as he sold drugs, they said.

"Surely the legislature was entitled to impose an additional financial penalty in cases involving special threats to public health, and to utilize the remedy of forfeiture for property already in the state's custody," they told the high court.

Meanwhile, briefs supporting Timbs tell stories of people who have had thousands in cash seized during traffic stops and others who have forgone food and other necessities to be able to pay their fines.

"When faced with excessive fines and fees, impoverished and low-income people are often forced to make impossible choices between meeting basic needs and making payments to avoid further penalties," the ACLU wrote in one brief.

Should Timbs win, companies and people hit with the forfeitures and charges may be able to argue that they are constitutionally excessive, which will likely spur more litigation, Colgan said.

But while it might answer the question of whether fees and fines can be excessive under the constitution, the high court likely won't address what excessive means in this context, according to Colgan.

"I would be very surprised to see if they would do more than necessary," Colgan said.