Old Foe Of Criminal Sentencing Reform May Soon Oversee It 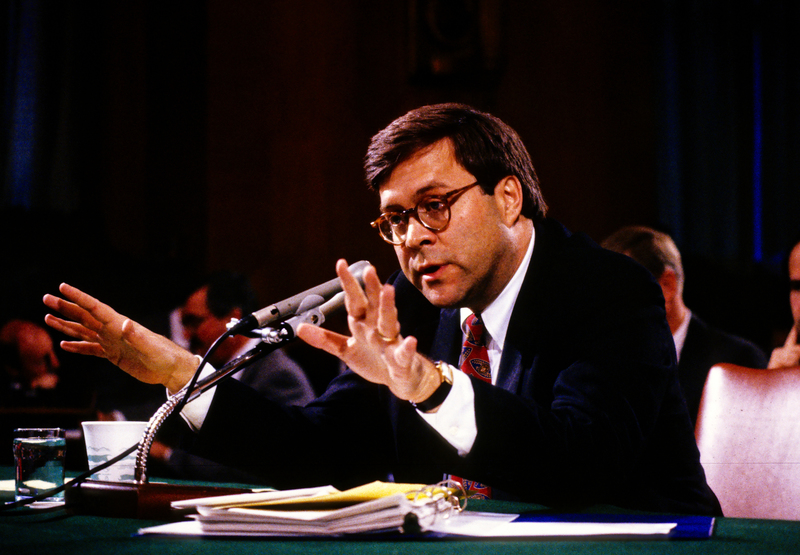 Then-U.S. Deputy Attorney General William Barr testifies before the U.S. Senate Committee on the Judiciary during his confirmation hearing to become attorney general in November 1991. (Getty)


Attorney General nominee William Barr spent decades opposing some of the criminal justice changes that President Donald Trump signed into law last month — putting him at odds with senators responsible for his confirmation and raising concerns about how he will implement the reforms.

As attorney general under President George H.W. Bush, Barr frequently called for a "tougher on crime" mentality at the height of the '90s crime wave, advocating for tougher sentencing and effectively giving up on reforming some offenders. Speeches released as part of his confirmation process show him tying increases in crime to a "moral crisis" in America, a rise in poverty and single-parent households.

More recently, Barr signed onto a letter criticizing a previous version of the bill Trump signed into law last month. That letter, which included Barr and other former federal prosecutors, criticized sentencing changes that became part of the First Step Act, which alters prison conditions and minimum sentences.

If the Senate confirms Barr in the next few weeks, he'll be responsible for implementing changes to the criminal justice system he said would "be undeniably harmful to the interests of public safety and justice."

In a December letter, more than 70 organizations including the American Civil Liberties Union and the Human Rights Campaign raised concerns about Barr's views on criminal justice reform.

"These views are especially troubling at a time when there is overwhelming support from individuals across the political spectrum to reform the justice system," the letter said.

A representative for Barr did not immediately return a request for comment.

The statements about the future of the country's criminal justice system will almost certainly play into what is shaping up to be a contentious confirmation process as he heads before the Senate Judiciary Committee for a hearing later this month.

While serving as the late Bush's attorney general, Barr argued in a 1992 speech in Dallas that the best way to deal with repeat offenders is to lock them up "for a length of time dictated by the public's safety."

He also argued that after a third conviction, recidivism is "almost a certainty" among repeat offenders and "the only time they are not committing crimes is when they are locked up."

As attorney general, Barr approved a report titled "The Case for More Incarceration," which argued for a strategy of "crime prevention through incapacitation" that focused on keeping more criminals in prison for longer terms. Barr wrote in the introduction to the report that its recommendations — like more than doubling federal prison capacity — had initially only been circulated internally, but he decided to make them public.

"Too many violent criminals are sentenced to prison but are released early on parole or simply to relieve the pressure of prison crowding," Barr wrote. "None of us is naive enough to think that these criminals will suddenly become upstanding, law-abiding citizens upon release."

Yet Barr's skepticism about reductions in mandatory minimums has continued into this decade, as he signed a 2015 letter with other former federal prosecutors that criticized a previous version of the sentencing reforms adopted by Congress last month, saying such changes would be "opening the doors of our federal prisons."

"This is not the time for Congress to disrupt a sentencing regime that strikes the right balance between all interests and has contributed to significant gains in reducing crime," the letter said.

Over the intervening three years of negotiations, the bill eventually became the First Step Act that Trump signed into law with bipartisan support last month, containing provisions Barr argued against in the 2015 letter and earlier in his career.

One part of the bill focused on prison conditions, such as banning restraints on inmates during childbirth, increasing "good time" credits and mandating that prisoners be held within 500 driving miles of their families. Low-risk prisoners would also be eligible for anti-recidivism programs that could reward them with "earned time" credits that could see them released to a halfway house or home confinement.

On the sentencing reform side, the law shifted how gun charges can "stack" on one another, reduced mandatory minimums and applied Fair Sentencing Act changes to the sentencing disparity between crack and powder cocaine retroactively.

Advocacy groups on both sides of criminal justice reform have already started to stake out their positions on Barr's nomination in advance of the Jan. 15 confirmation hearing. Shortly after his nomination, the ACLU, Brennan Center for Justice and others criticized Barr's record on criminal justice.

In one online post, ACLU Legal Director David Cole argued that Barr is stuck in a "time warp" of tough-on-crime policies that would roll the country back.

The Federal Law Enforcement Officers Association, a one-time critic of the First Step Act that negotiated changes to the legislation, endorsed Barr in a letter to the Senate Judiciary Committee Thursday.

"Throughout his tenure, he worked closely with the Federal Bureau of Investigation, prioritized anti-crime initiatives and oversaw several high-profile special investigations," the letter said.

Much of the furor surrounding Barr's nomination has so far focused on whether he would recuse himself from oversight of the probe by Special Counsel Robert Mueller into Russian interference in the 2016 election. One Democrat on the panel, Sen. Chris Coons, D-Del., told Law360 that he has "real concerns" about Barr that he hopes will be addressed by the hearing.

"I will try to balance my serious concerns about his previous statements about the Mueller probe and its independence, with criminal justice reform and other issues, with ways in which I am already hearing from other people who served with him and around him who are saying positive things about him," Coons said.

Democrats also criticized Barr's predecessor, former Attorney General Jeff Sessions, for his tough-on-crime policies. While at the post, Sessions directed federal prosecutors to charge the most severe crimes possible under the facts, regardless of mitigating circumstances.

Barr's past statements also go against the reforms championed by the committee's immediate past chairman, Sen. Chuck Grassley, R-Iowa, who spent years shepherding the bill through changes and iterations. A bipartisan majority of the Senate that will have to vote on Barr's nomination also supported the final bill, voting 87-12 to approve it.

Barr, if he's confirmed, will have the same tools to direct federal prosecutions that Sessions used, although they will be limited by the new law.

However, advocacy group Right on Crime Director Derek Cohen said there are a few administrative avenues where the U.S. Department of Justice can tweak implementation, primarily as it deals with the treatment of current inmates.

The law as passed requires the DOJ to come up with an assessment tool to determine who would be eligible for "earned time" credits and what recidivism-reduction programs can be used toward that program.

The Justice Department will be involved in "giving the gold check mark to the programs that work and some of the ones, like acupuncture or some of the other more loosely defined ones, may not qualify," Cohen said.

Others, such as liberal advocacy group Alliance For Justice legal director Dan Goldberg, pointed out "there's a lot of discretion" in how the Bureau of Prisons can go about writing the rules for the recidivism reduction programs. That could give Barr a lot of leeway to write those rules narrowly, Goldberg said.

"William Barr throughout his career seems to be more concerned with putting people in prison for as long as possible rather than seeing them re-enter society," Goldberg said.

The acute issue of the Fair Step Act also plays into broader concerns about Barr's record on criminal justice issues, Goldberg said. He has held onto the tough-on-crime mentality after many of the others in law enforcement have come around to reforms.

"He has an incredibly disturbing record and legacy of over-incarceration, of opposing reform of the criminal justice system, of any effort to make the system fairer or more efficient," Goldberg said.