Attorney Phil Garland, 73, who is one of only five lawyers in Garner, Iowa, worries that in a few years, the town could be down to only one lawyer for its 3,000 residents. (Dean Riggott | For Law360)


When attorney Phil Garland first hung his shingle in Garner, Iowa, there were five lawyers in town. Over 40 years later, that number hasn't changed. What has changed, though, is those lawyers' ages.

Garland is the only one who has hired a younger associate to take over when he retires. That means in a few years, the town and its 3,000 residents could be down to just one attorney to handle everything from real estate transactions and probate work to juvenile issues and criminal cases.

And Garner isn't the only small town facing that problem. Adams County, Iowa, for instance, boasts only one attorney for its 3,686 residents, while Ringgold County, with 5,034 residents, is home to three, according to the Iowa Bar Association.

The problem isn't unique to Iowa either. Although about 20 percent of Americans live in rural areas, only 2 percent of lawyers practice there, according to research by Lisa Pruitt, the Martin Luther King Jr. Professor of Law at University of California, Davis School of Law.

"Basically, the rural profession is in most places aging really quickly, and young lawyers are, by and large, not interested in going to replace them," Pruitt says.

Faced with that trend, bar associations, law schools and others have begun experimenting with programs aimed at luring young attorneys to the heartland and making it more financially feasible for them, including through loan forgiveness, to set up shop in communities where residents' options for filing a lawsuit or even drawing up a will might otherwise be painfully slim.

If they don't succeed, some anticipate a not-too-distant future in which many people living in rural communities, especially those with limited resources, will have no access to legal help at all.

"Maybe I've just been denied my veterans benefits or some other type of public benefit, or maybe somebody has a child with disabilities, you know, how are they going to get the advocacy they need?" Pruitt asks.

Lack of Attorneys, Lack of Justice

In 2017, low-income, rural residents received inadequate or no professional help for 86 percent of their civil legal problems, according to the Legal Services Corporation's 2017 Access to Justice Report.


Those legal problems can include dealing with landlord-tenant issues, public benefits, independent education plans for children with disabilities and environmental injustices, according to Pruitt.

"It is basically the denial of access to justice," says Lyle Koenig, a self-professed "country" lawyer and co-chair of the Nebraska State Bar Association's Committee on Rural Practice Initiative. "Even if somebody isn't suing you or something like that, if you just need a deed drafted or a will drawn, there's no way to do it unless there's an attorney that's handy in your local community."

More and more often, there isn't. Nebraska, for instance, has 11 counties with no attorneys, according to that state's bar. In parts of the state, people drive 75 to 100 miles one-way to have a deed or will drawn up "simply because there's nobody any closer to do it," Koenig says. 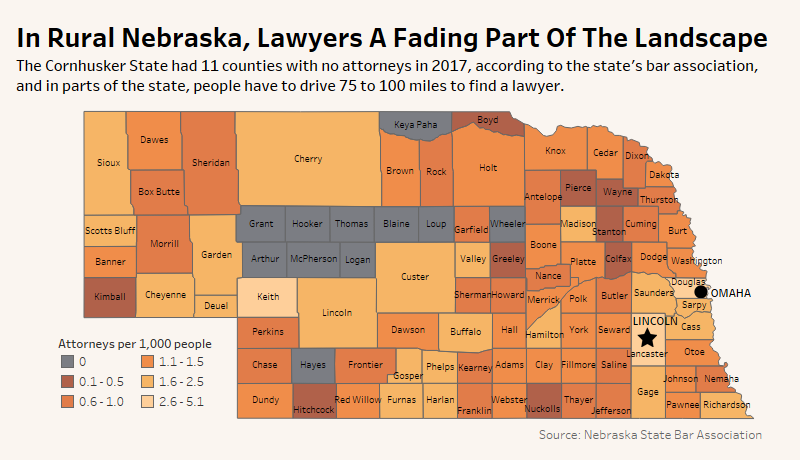 
That dearth of legal help is expected to worsen as baby-boomer attorneys who set up shop in America's small towns 40 or 50 years ago retire and younger attorneys choose to congregate in cities rather than fill the gap.

That sell might have softened when the recession slashed jobs for new lawyers across the board, with the volume of entry-level associates starting work in 2009 falling by around 40 percent from previous years, according to the National Association for Law Placement. But rural destinations are losing any edge they may have gained over more highly populated and competitive areas as the job market for lawyers bounces back, with NALP finding that the employment rate for the class of 2017 edged up by more than 1 percent over 2016.

"It's likely that the recession did create an incentive for some recent law graduates to try rural practice," Pruitt says, "but my sense now is that the urban and suburban market has loosened up again, so there is probably less pressure for young lawyers to give rural practice a shot."

Garland, who is chairman of the Iowa State Bar Association's rural practice committee, has seen this problem firsthand. He remembers once offering a law student who was working as his clerk a job, but "she fell in love with a microbiologist and we didn't have any openings at Subway or Hardee's for a microbiologist, so she didn't come here."

So Garland helped start the Rural Practice Program, one of several initiatives sprouting up with the aim of introducing new attorneys to the possibility of rural practice. The program organizes meet-and-greets between law students and rural lawyers to set up clerkships for those students in rural areas. 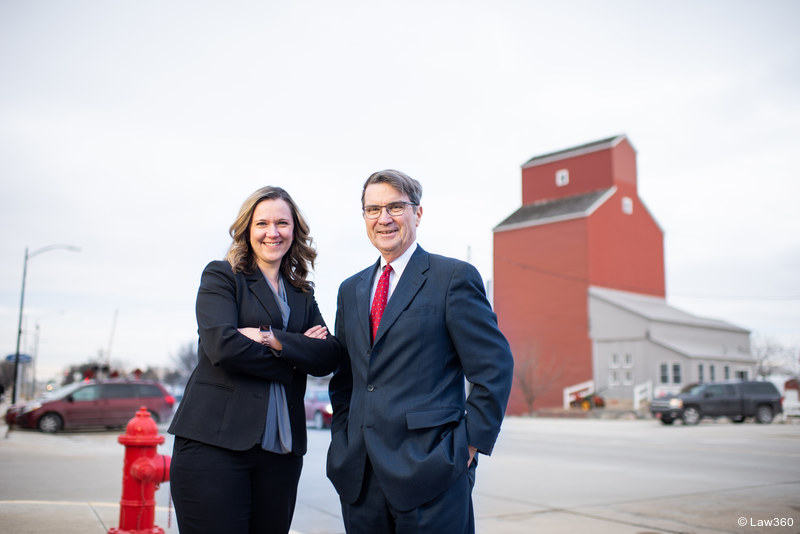 
The program is how Garland met his associate, Carrie Rodriguez, who shadowed him in juvenile court. After a day and a half, he offered her a job.

"When I hired my associate, Carrie, I told her the business is yours when I'm done," Garland says, promising her that he wouldn't expect her to "buy out" the practice from him when he retires.

Garland says newly minted attorneys can no longer afford that "buy-out" because of the massive debt they are graduating with. Rodriguez "told me flat out that she's got a lot of student debt … she said if you'd have had a buy-out I'm sure I wouldn't have come," Garland remembers.

"I try to encourage all my contemporaries" to forgo that money, he says. "We had the benefit of a cheap education, these kids today don't have it."

That debt is the biggest barrier to luring lawyers to the heartland, according to Pruitt and Garland, making the prospect of a regular salary from an established city firm far more attractive than the vicissitudes of solo practice or the cost of buying into a small firm in a town like Garner.

That's one reason why 65 percent of South Dakota's attorneys are located in just four cities, and smaller counties and towns in the state are importing attorneys to represent them, according to Suzanne Starr, director of policy and legal services at the South Dakota Rural Attorney Recruitment Program.


"With the mounting student loan debt of students, they are drawn to the larger firms where they can get a steady paycheck," she says. "The waxing and waning of self-employment is difficult, especially that first year when they are establishing their businesses."

The state's Rural Attorney Recruitment Program offers attorneys willing to live and work for a minimum of five years in a county with fewer than 10,000 people more than $12,500 per year to assist with their student debt. The county and the state's court system share the cost of the program.

Pruitt says despite the cost, the program is a money saver, helping municipalities avoid paying lawyers to travel from other jurisdictions.

"South Dakota is a pretty conservative state, right, so to be perfectly frank a lot of people didn't seem particularly concerned about access-to-justice issues for modest-means and low-income people," she says. "But they did have a concern about what the lack of a lawyer meant for the community more broadly in terms of economic fitness and economic development."

Starr says the program has helped increase the number of attorneys in rural South Dakota, and she is hoping to get the program's initial 2022 expiration date eliminated.

"A lot of people debate, if you threw money at this problem, could you solve it?" Pruitt says. "And the South Dakota situation suggests that yes."

Koenig hopes that also holds true in Nebraska, where he helped start the Rural Law Opportunities Program, which grants full scholarships to some undergraduates along with automatic admission to the University of Nebraska College of Law, as long as they achieve a 3.5 GPA and a minimum LSAT score. In exchange, those students are expected to practice in rural areas after graduation, though it's not a requirement.

Koenig says the program, currently in its second year, deliberately concentrates on students attending what he describes as "country colleges."

"If you want to try to educate people and persuade them to come to the country to practice law, it would make sense to start with people that are raised in the country in the first place," he says. 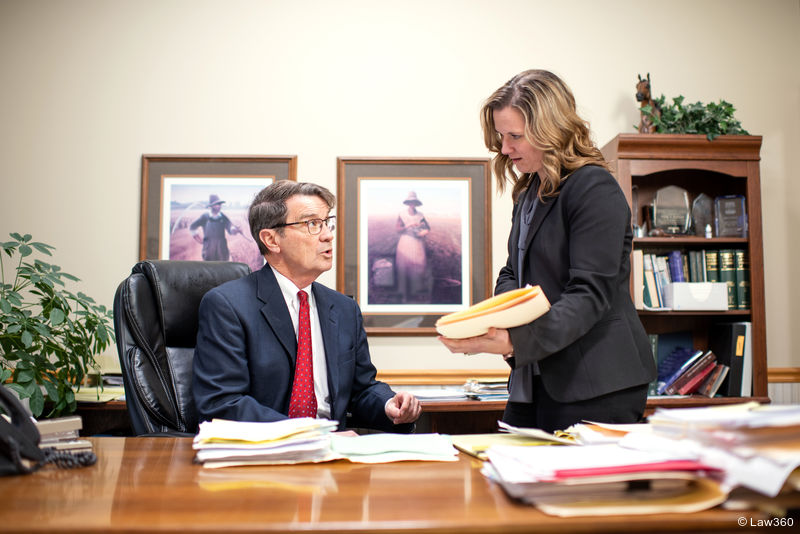 Rodriguez says her student debt would have made it impossible for her to work with Garland if he had expected her to buy him out of the practice when he retires. (Dean Riggott | For Law360)

Meanwhile, Colorado is taking a digital approach to the same problem. The state's Rural/Virtual Practice Program matches new lawyers in Denver with established lawyers in rural parts of the state in mentoring and co-counseling relationships in an effort to head off the "silver tsunami" of retiring lawyers, as J. Ryann Peyton, the program's director, puts it.


"The purpose of the pairings is to introduce the new lawyer to rural/mountain practice, while allowing the new lawyer to maintain the majority of his or her time in the Denver metro area through the use of virtual practice tools," Peyton says.

Wisconsin is doing something similar, but in a decidedly lower-tech manner.

The Greater Wisconsin Initiative Bus Tour takes urban attorneys and law students on exactly that — a bus tour of the state's rural communities, where 58 percent of attorneys are over 50, according to Lisa Roys, director of advocacy and access to justice at the State Bar of Wisconsin.

The goal of the program is similarly to introduce urban attorneys to judges, lawyers and community leaders in small towns to show them what practicing in those communities would look like.

The program has "had remarkable success," according to Roys, with a third of its participants from each year's tour securing positions in nonurban parts of the state.

Pruitt says most of these programs, and others like them in places like Maine and Texas, are too new to say if they will ease the rural attorney shortage.

Koenig, though, is more upbeat about their prospects.

Rodriguez, who says she accepted a job as Garland's associate in Garner because of the opportunities for mentorship, variety and more personal client relationships, has had exactly that experience.

"If you think you're going to kind of sit out in the middle of nowhere and not do anything," she insists, "you're sorely mistaken."