Velia Dueñas is a homeless mother with cerebral palsy and too many bills to pay.

Together with her husband and two children, she receives less than $12,000 per year in California state government benefits — barely enough to cover essential life expenses, let alone the pile of court fees she's accumulated after years of struggling through the criminal justice system. 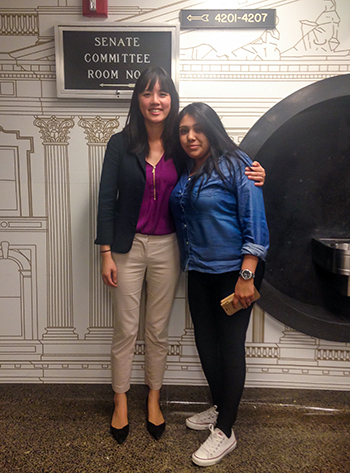 The debts stem from her inability to pay a little over $1,000 in court costs from juvenile citations she received as a teenager. Because she couldn't pay, the state suspended her driver's license. When she was subsequently charged with three misdemeanors for driving on the suspended license, her debt to the system grew.

She's since served 51 days of jail time in lieu of paying criminal penalties, in addition to 90 days as part of her sentence. Though the court waived her previously ordered attorney's fees after finding she was too poor to pay them, it still demanded she pay $220 in "mandatory" facilities and operations costs and a restitution fine.

But according to a recent ruling by the California Court of Appeal, imposing the fines and fees was nothing more than punishment for being poor. In a landmark decision that advocates say could lead California to become the first state to abolish court fees, a three judge panel waived the facilities and operations costs and said the restitution fine must be stayed until the state can demonstrate that she can afford to pay.

"Because the only reason Dueñas cannot pay the fine and fees is her poverty, using the criminal process to collect a fine she cannot pay is unconstitutional," the court ruled on Jan. 8. "These fees, assessed as part of a larger statutory scheme to raise revenue to fund court operations, should be ... imposed only on those with the means to pay them."

Dueñas' attorney Kathryn Eidman, who works for the Los Angeles pro bono firm Public Counsel, said that once the ruling becomes final on Feb. 7, legal services lawyers around the state will cite the case in their own representation of indigent defendants.

"It establishes a legal precedent that applies to all criminal convictions going forward," she told Law360.

Notably, the ruling also invited the state legislature to amend criminal statutes so that trial courts would have to consider a defendant's ability to pay before imposing any "mandatory" fines.

Within 10 days of the judges' invitation, Calif. Sen. Holly Mitchell accepted it. On Jan. 18, the Democratic legislator proposed a bill that goes even further than merely requiring ability to pay hearings, calling on her fellow lawmakers to eliminate administrative fees altogether.

Her legislation cites similar moves by San Francisco and Alameda Counties, which nixed all criminal administrative fees under local control in 2018 after reports found that the average adult on probation has faced up to $6,000 in fees.

Mitchell's office did not respond to requests for comment. But according to a statement released last week by the Debt Free Justice California coalition, which helped draft the bill, abolishing the current administrative fees is better than simply requiring ability to pay hearings because it addresses the criminalization of poverty "at its root."

East Bay Community Law Center's Theresa Zhen, who signed onto an amicus brief in the Dueñas case and helped form DFJC, told Law360 that ability to pay determinations are "actually counterproductive." Enormous human and court resources are expended, she said, to reach an often foregone conclusion.

"The reality is that 80 to 90 percent of the people going through the criminal justice system qualify for the services of the public defender, which means they are declared low-income already," Zhen said. "Right out of the gate, we know people can't afford to pay these fees." 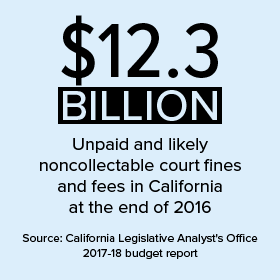 She also pointed out that even if the court finds someone can afford to pay, relying on defendants to fund a justice system isn't particularly effective. Before Alameda County eliminated its probation supervision fees in December, its rate of collection had been just 4 percent. Statewide figures show $12.3 billion in fines and fees remained outstanding at the end of 2015-2016, with the Legislative Analyst's Office finding that much of that balance might not even be collectable because "the costs of collection could outweigh the amount that would actually be collected."

While support is strong for reform, not everyone agrees that eliminating fees completely is the necessary step. In the Dueñas case, the Los Angeles County Bar Association joined its counterparts in San Francisco and Beverly Hills in an amicus brief supporting the young mother. But LACBA President Brian Kabateck told Law360 that he thinks "the question about ability to pay is more important than eliminating [court fees] entirely."

"I look at this and I think, 'Hey, maybe a complete abolition isn't the right answer, but some elimination might make perfect sense,'" he said. "But I think that ultimately we are on the precipice of a massive change."

Meanwhile, the Los Angeles City Attorney's office has challenged the part of the opinion that shifted the burden of proving one's ability to pay from the defendant onto the state. A rehearing bid filed last week noted that restitution fines are ultimately used to compensate crime victims.

"Placing the burden on the People ... creates a substantial risk that some defendants who actually have the ability to pay will have their fines permanently stayed, which will have the unintended result of there being less money available to compensate crime victims for their losses," the petition states.

Eidman, however, said the shifted burden was crucial to fighting the cycle of criminalizing poverty that traps people like her client.

"Placing the burden on the defendant to establish inability to pay results in additional court appearances for which people need to arrange transportation, take off days of work, find childcare … all of which be really burdensome, particular for the low-income," she said. "Additionally, the homeless often don't receive notices for scheduled hearings. Then people get automatic misdemeanors for failure to appear, which then just potentially restarts the cycle."