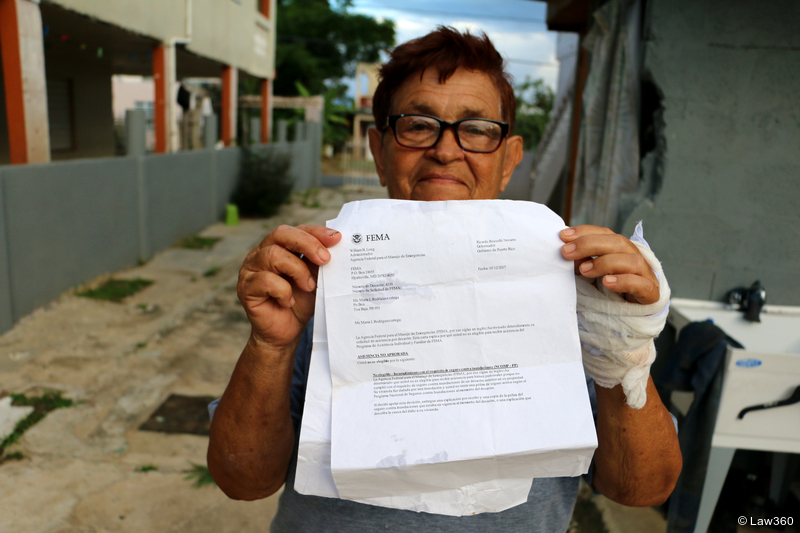 Maria Rodriguez Ortega of Toa Baja, Puerto Rico, holds a letter saying the Federal Emergency Management Agency has determined she is not eligible for aid because she did not have flood insurance. (Annie Pancak | Law360)


Brenda Rivera Fontanez was one of the luckier ones. Her concrete house was still standing after Hurricane Maria, even if most of the roof was gone. And within two weeks, she was able to get just enough signal on her husband's cellphone to fill out a form for aid from the Federal Emergency Management Agency.

More than a year later, though, that aid remains caught in legal red tape. And Rivera still scrambles to place buckets in strategic spots to catch the water that leaks through the blue tarp holding together what's left of her roof.

Rivera, who lives in the mountainous town of Aguas Buenas just shy of 20 miles south of San Juan, went through two appeals with FEMA after her initial request for help to replace her roof was denied.

She is one of thousands of Puerto Ricans battling the federal agency over hurricane aid denied because they don't hold the titles to their properties, even if they've lived in them for decades.

A survey of more than 2,000 people in all but one municipality on the island by the titleship clinic at the University of Puerto Rico School of Law found that 49 percent of residents have problems with their titles or lack titles. Without titles, residents have a difficult time proving ownership of their properties to federal agencies distributing aid to repair homes.

The title trouble is one of the greatest barriers everyday Puerto Ricans face in rebuilding from Hurricane Maria, which wreaked unprecedented destruction across the island in September 2017 and threatens to overwhelm legal aid attorneys at a time when the need for legal assistance is expected only to increase.

Puerto Rico does not require local attorneys to log pro bono hours and has not been able to benefit from mainland attorneys wanting to offer help because of differences between the two legal systems.

"Now is the real crisis," said Vivian Neptune Rivera, dean of the University of Puerto Rico's law school, which runs a clinic for Maria-hit homeowners and is working on a long-term legal solution to the title issue. "Now you see the long-term effects of the hurricane."

Of more than 1.1 million applications for FEMA aid after Hurricane Maria, less than half — 467,584 applications — have been approved, according to the agency's most recent figures.


While some of the top reasons for denial are common after all disasters, such as the agency deeming the damage unrelated to the event or being unable to make contact for an inspection, homeownership verification has been a particular challenge in Puerto Rico.

About 72,653 applicants were originally denied because of lack of acceptable homeownership verification.

"Most people can be owners of the property according to our law, but they wouldn't have the papers or documents that could prove that they are the owners," said Alejandro Figueroa Quevedo, the deputy director of Servicios Legales de Puerto Rico.

Rivera, like many, had the house informally handed down to her without going through the lengthy and expensive process of officially changing the name on the property's title. In Rivera's case, her father, who hasn't lived there for several years, was the titleholder.

In Puerto Rico, changing the name on a property's title can be a protracted process that involves attorneys and sometimes land surveyors and engineers. Lourdes Quintana Lloréns, a professor at the University of Puerto Rico's law school, estimates the cost can run between $800 and $1,200.

For Rivera, there was a relatively easy fix: After her first appeal to FEMA was denied, her father donated the house to her and completed the process of transferring the title. She is now waiting for FEMA to review the donation process to see if any repair benefits will be granted. 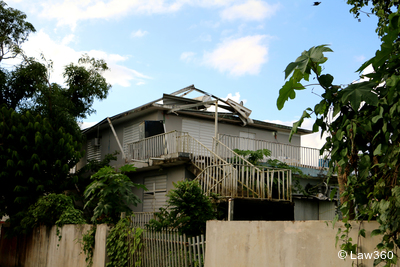 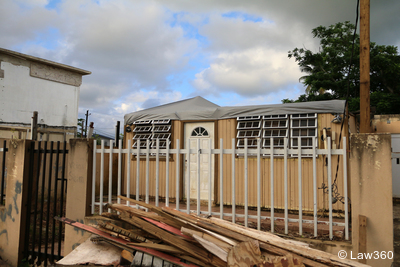 
But for many Puerto Ricans, the title of their homes may be in the name of a deceased ancestor several generations removed. The cost of completing the title change is multiplied by the number of generations, according to Quintana. In those cases, all potential heirs must be tracked down to make sure they have given up any rights to the property or are compensated for their shares, the professor said.

In addition to the cost deterrent, people sometimes think that if they change the title, they may lose government help like food stamps or medical care, Quintana said, a significant factor when nearly half the island's inhabitants are at the poverty level.

"But one thing has nothing to do with the other," she said.

Some municipal governments have tried to address the title issue, which has led to a patchwork of regulations and approaches, according to Neptune Rivera, the law school dean. In some cases, lawmakers who campaigned on assigning deeds to people's properties handed out documents to property holders that are not actual deeds and that FEMA has refused to accept, she said.

These documents often authorize the resident to live on the property but reiterate that the land belongs to the municipality, Quintana said.

"When FEMA came, they said, 'This is not a deed. This does not prove ownership.' They thought the city had given them the title, and it's not true," Neptune Rivera said.

The sheer magnitude of the need to deal with title issues stretched legal aid attorneys, all of whom are operating with limited resources. Suddenly the demand for pro bono services was enormous, even from former professionals who would not typically have qualified.


"People that have a higher level of education, professionals that have lost their jobs or their income, are right now being our clients," Figueroa said.

The differences between the legal systems in Puerto Rico and mainland U.S. impacted how the legal aid community responded on the island after Hurricane Maria. The so-called Katrina rule allowing out-of-state attorneys to serve pro bono was never adopted in Puerto Rico, in part because of the difficulties in jumping into the island's legal system. Puerto Rico's local legal system continues to be deeply rooted in the civil law system from when it was under Spanish rule, and proceedings are conducted in Spanish.

"Maybe in the continental United States, which is based on common law, it's easier for an attorney from Florida, let's say, to go to Texas," Figueroa said. 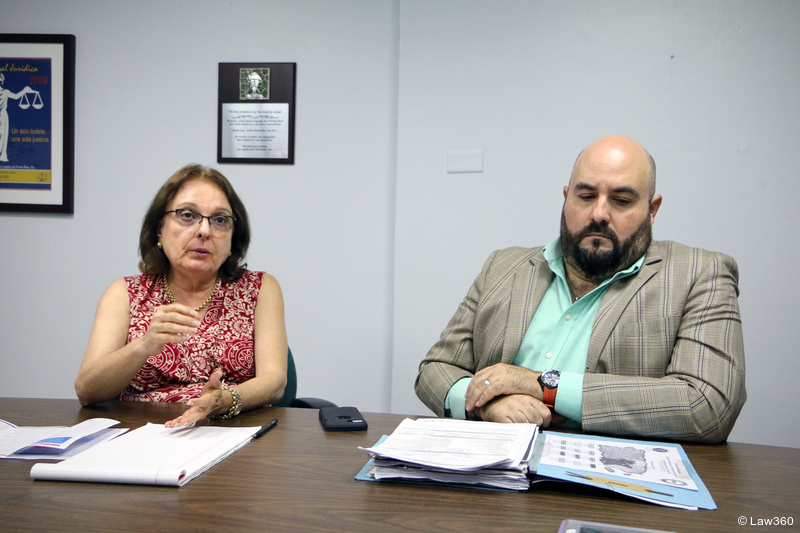 
Instead, Servicios Legales stepped in as the main point of contact for FEMA, with servicios lawyers setting up in FEMA's emergency centers across the island to help residents apply for aid. The Legal Services Corporation-funded organization directed its funds toward equipping its lawyers with cellphones and laptops so they could work remotely at plazas and civic spaces across the island.

"We wanted to make sure the response really came from Puerto Rico and not from abroad.
In order for it to be a sustainable model, it really had to be Puerto Rican lawyers here who could respond to not only this hurricane but future hurricane disasters," said Natasha Lycia Ora Bannan of LatinoJustice PRLDEF, which was part of the coalition.

Servicios Legales Director Hadassa Santini Colberg said the organization lost four attorneys after the storm but has been able to staff up since then and serve the public's need with the help of private attorneys doing pro bono work. She is more worried about ongoing funding for the organization. Although most of its budget comes from the Legal Services Corporation, 25 percent is allocated by the cash-strapped Puerto Rican government, which cut $540,000 to the Servicios Legales budget in 2017 and an additional $250,000 in 2018.

"In one year, we've been cut almost $1 million," Santini said. "We've been recruiting people, mostly paralegals, but it depends on the funds we get."

After the FEMA denials started pouring in, Ayuda Legal Puerto Rico helped draft a sworn declaration affidavit that FEMA is now accepting in lieu of a title as long as residents can provide other documentation showing they have been living on the property and paying bills.

Servicios Legales has been trying to get the word out about the new form. Every few weeks, the organization hosts special legal service clinics in different parts of the island.

Irma Rosario del Rio keeps a stack of the forms on her desk at the Centro Integral de Apoyo a Víctimas, a clinic affiliated with the University of Puerto Rico's law school that helps crime victims and elderly people with legal aid.

"We send them instructions to explain everything and a card with our information and tell them to call if they have any doubts or questions," Rosario del Rio said. 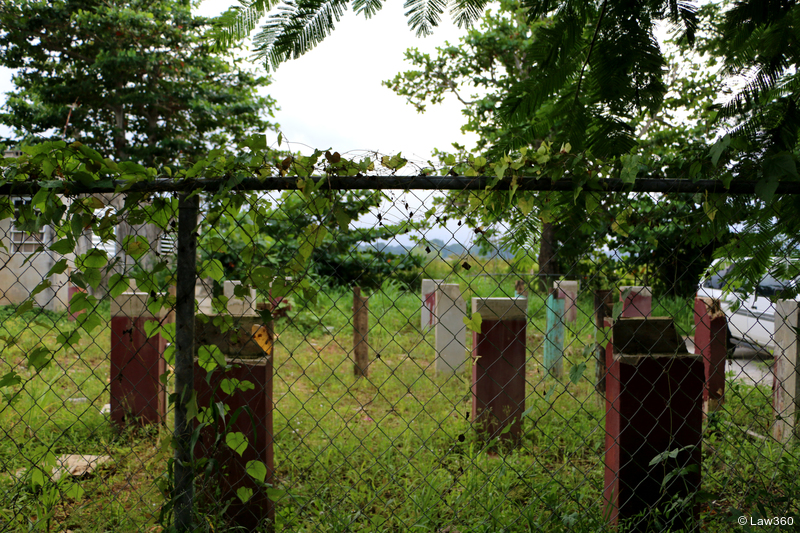 All that is left of a house in Toa Baja after Hurricane Maria is the foundation. (Annie Pancak | Law360)


Some residents and lawyers have accused FEMA of being stingy with the funds it does give out and of not helping homeowners rebuild in a way that will allow them to prevent future hurricane damage. For example, many of the homeowners seeking FEMA aid have wooden houses, according to Rosario del Rio. Rebuilding in concrete would be safer, but FEMA will cover only the cost of what was lost.

Neptune Rivera, the law school dean, is working on creating a long-term fix for the property title issue. In light of her clinic's islandwide survey, she is working on a five-year proposal to help communities modify their laws to simplify the process of changing a name on a title.


A law has been proposed in the Puerto Rican Senate to streamline the process, although it has not gained much traction, Quintana said. Reformers are running into bureaucrats who are unwilling to change the process and agencies dealing with budget cuts and lack of personnel necessary to handle requests.

Zulma Rovira, a legislative aide for the bill's sponsor, Sen. Zoe Laboy Alvarado, said the legislation would exempt people in specific situations without titles from parts of the lengthy title change process in order to help them assume formal ownership of their homes more quickly. The bill is still in committee as members gather more information from government agencies and other parties, she said.

Neptune Rivera noted that each community will have its own red tape to unravel. Additionally, some communities have indicated that they are not interested in keeping a deed-based system but would like to consider creating land ownership cooperatives.

"We will go to a specific community to help them all with the regulatory process. Then after we finish, we'll move to the next," Neptune Rivera said.

Correction: A prior version of this story incorrectly named the director of Servicios Legales. The error has been corrected.