Value Of Exonerees' Lost Time Depends On Where They Live

In 1978, a woman and her four-year-old son were brutally murdered in their Simi Valley, California, apartment. Craig Coley, the man convicted of the crime, spent 37 years behind bars before DNA evidence eventually proved him innocent — and opened the way for statutory compensation from the state and a civil settlement from the city.

In May, California paid Coley $1.95 million based on a state law that promises $140 per day of wrongful incarceration. Late last month, Simi Valley dwarfed that award by agreeing to a $21 million settlement, more than 10 times the amount California paid.

Though pleased with the victory, Coley's attorney Ron Kaye of Kaye McLane Bednarski & Litt LLP told Law360 that the time his client lost is "immeasurable."

In a statement, Simi Valley City Manager Eric Levitt acknowledged that "no amount of money can make up for what happened to Mr. Coley." But by agreeing to the $21 million deal, the city tackled a nationwide puzzler: how much is a wrongfully convicted person's lost time worth?

The answer depends on where someone lives and how willing they are to take their chances in civil court, according to Jeffrey Gutman, a law professor at George Washington University whose latest research on wrongful conviction compensation is set to be published in the summer issue of Northeastern Law Review.

But those numbers only include wrongfully incarcerated exonerees who succeeded in the compensation process. When accounting for all those who can't, won't or failed to get compensation, Gutman's data shows that just 57 percent of all years lost to wrongful conviction were compensated at all.

In seven states lacking statutes — Alaska, Delaware, New Hampshire, New Mexico, North Dakota, South Carolina and South Dakota — no payback by law or by lawsuit has ever been granted, leaving empty-handed a total of 33 innocent people who spent a combined 235 years incarcerated.

"You can't tell me that a fair system is one in which the value of a year lost is worth over 100 times more in some states than others," Gutman said. "State statutory awards depend on the geographic fortuity of the state that wrongly convicted you. It is not right."

For example, Coley was wrongfully convicted in California, which has had compensation statutes on the books for over a century and provides an award of up to $51,100 per year.

Texas would have paid more, where statutes provide for about $80,000 per year lost, plus another $80,000 annually going forward as well as attorney's fees and lost wages. On the other hand, the Wisconsin state statute caps compensation at $25,000 — had Coley lived there, he would have landed a comparatively paltry $660 per year lost.

Then there are the states with no such laws, where the main alternative path to compensation for exonerees, outside of legislative acts or general claims, is litigation. And though civil claims can lead to much larger payouts, they are also harder to win because the standard is higher in court than by statute. 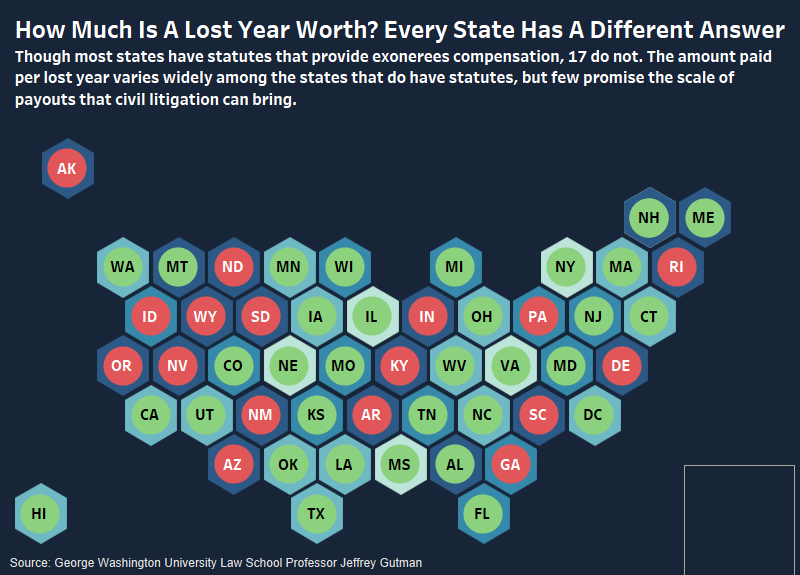 Nationwide, Gutman found that 73 percent of incarcerated exonerees who seek statutory compensation end up walking away with money, but only 55 percent of those who file civil claims win damages or settlements.

Rebecca Brown, policy director at The Innocence Project, said that data shows that "it is incredibly difficult to win a civil lawsuit."

"In many wrongful conviction cases, fault cannot be demonstrated," she said. "There might've just been a poor lineup procedure or somebody confessed to a crime because of the pressures that they felt in the interrogation room, not necessarily because there was official misconduct. Any one of those scenarios would not enable someone to prevail in civil litigation."

In Coley's case, he needed only to show that he was actually innocent to meet the California statutory requirements, whereas a jury verdict would have required a showing of official misconduct on the part of Simi Valley prosecutors. However, because his case had a strong DNA component, the city settled before the case got to court.

"Worst case scenario, we could have seen exposure up to $80 million," Levitt, the city manager, told Law360.

If any states with a capped recovery can reasonably believe that the amount they're giving is a true reflection of the actual harm caused, they're out of their minds. 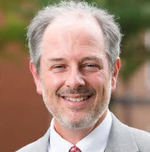 As of summer 2018, states and localities have paid a total of $1.72 billion in civil awards to formerly incarcerated exonerees, approximately three times the amount that states have paid under state compensation statutes, according to Gutman's numbers. The $304,000 average civil award per year lost is "way higher than any state cap," he said.

"What that means to me is that, if any states with a capped recovery can reasonably believe that the amount they're giving is a true reflection of the actual harm caused, they're out of their minds," he said.

Further complicating the process of compensation are tricky provisions some states include in their statutes.

New Jersey, for example, has an outright bar to providing compensation to people who pled guilty, a group that The Innocence Project has reported makes up more than 10 percent of DNA-based exonerations. Missouri's statute requires exonerees have DNA evidence of innocence, which most wrongful convictions lack.

In terms of liability limits, Texas' statute includes a bar on civil litigation; Kansas' law allows civil damages to offset statutory damages so that "the state is not paying out both," Brown said.

And for compensation outside what money can buy, she noted the national landscape is grim. Most state statutes and the federal government don't provide services like psychological counseling, medical and dental care, job skills training, education and other relevant assistance.

"In some places, the wrongfully convicted do not even receive the same services that people who've committed crimes receive," she said. "I'm not suggesting a race to the bottom here, but ... what we've found is that these laws, by and large, are woefully insufficient where they exist right now."