A recent report by the U.S. Sentencing Commission sheds new light on the prevalence of unwarranted sentencing disparities in federal cases, and should get some more attention from prosecutors, defense attorneys, judges, and the public at large.

Unfortunately, new data from the commission shows that post-Booker federal sentencing is not turning out quite as Congress and the Supreme Court had hoped.

This most recent set of such data is contained in "Intra-City Differences in Federal Sentencing Practices," a report that was issued in January 2019. In the report, the commission looked at almost 150,000 cases where judges in 30 cities had significant discretion in sentencing and where there was sufficient information to make comparisons. Overall, the cases were about 30 percent drug cases, 14 percent illegal entry or re-entry cases, 13 percent fraud cases, 13 percent gun cases, and 29 percent other.

The report has a wealth of information and is worth studying by lawyers in the 30 cities covered. I've designed the charts below to highlight the overall trends and to make comparisons between those cities clearer.

First, the Sentencing Commission found wide differences in sentences imposed by judges within the same city, concluding: "In most cities, the length of a defendant's sentence increasingly depends on which judge in the courthouse is assigned to his or her case." 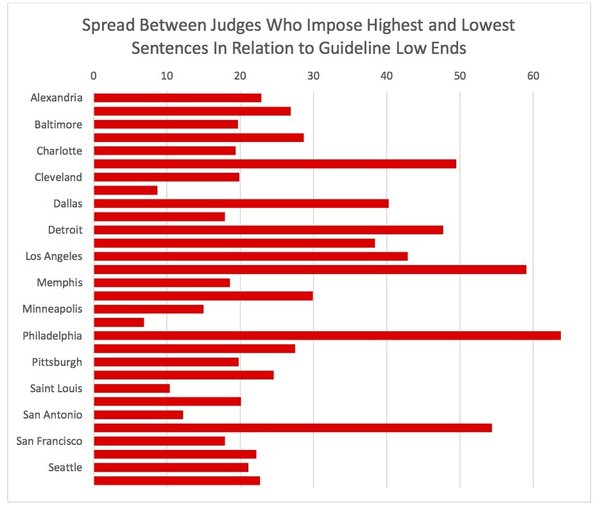 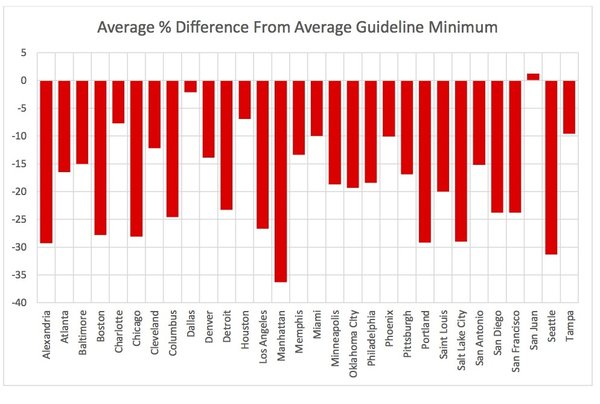 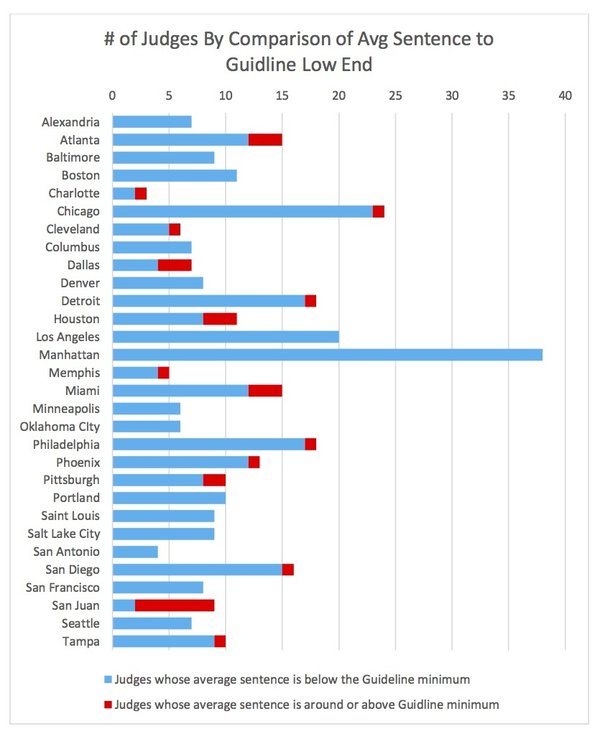 Lawyers practicing in the federal courts probably already knew much of this on an anecdotal basis, but the commission's data analysis puts some hard numbers on trends that lawyers and policymakers should be aware of and should address.

Why these differences in sentencing and these variations from the guidelines are occurring is not addressed in the commission's report. The commission does look at the mix of cases that different judges and different districts had, and this may explain some of the patterns, but probably not much, given that the analysis period covered several years' worth of sentencings.

But a look at some of the publicly available, case-specific data may provide some clues as to what is going on. Many lawyers may not be aware of this, but the commission has made a lot of anonymized data about sentencings available: first, in SAS and SPSS files that can be accessed via the commission's website, and second, in additional formats that can be accessed via the University of Michigan's Institute for Social Research.

My own analysis of the fiscal year 2016 data available online via the Institute for Social Research points to some possible factors.

First, sentences appear to go further down from the guidelines as the sentencing ranges get higher. The graph below shows that economic crimes (as indicated by Guideline 2B1.1) and drug crimes (as indicated by Guideline 2D1.1) result in sentences further below the guidelines as the ranges exceed 60 months (five years). Large cities such as New York and Chicago tend to see cases with larger loss amounts and drug quantities, and thus may see more below-guideline sentences than smaller cities with lower loss amounts and drug quantities. 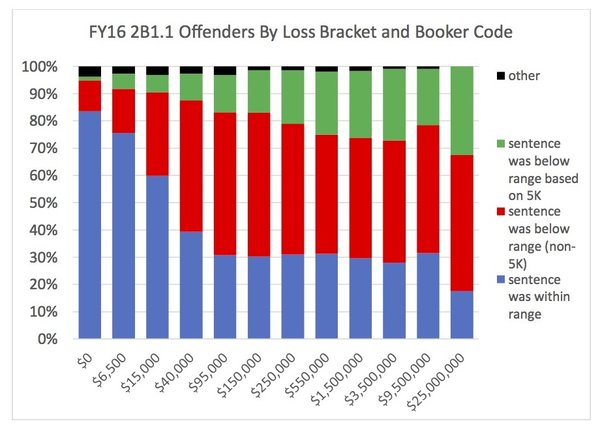 Second, as seen in the graph below, many economic-crime offenders are getting below-guidelines sentences, especially as loss amounts go up. This may reflect a discount of large loss amounts, or perhaps a discounting of some of the sentencing enhancements in 2B1.1, or perhaps credit for reputational harm and loss of professional licenses. 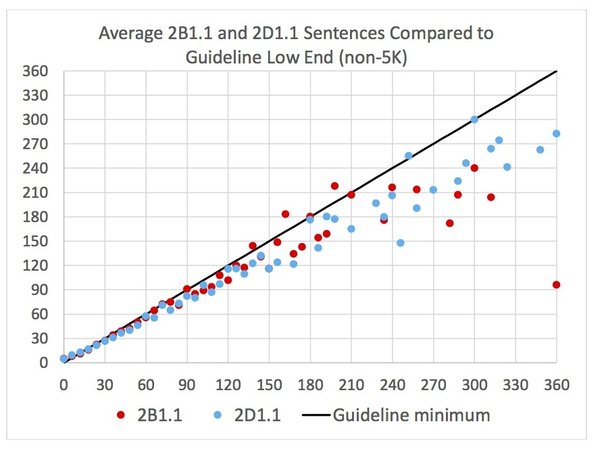 More research and discussion is needed, but there is enough data now to make the discussion about more than just anecdotes and outlier cases. The commission's data analysis raises serious questions that should impact sentencing recommendations and perhaps help reopen a debate about balancing judicial discretion with the goal of uniformity.

First, federal prosecutors should reconsider their approach to sentencing recommendations. The U.S. Department of Justice's Justice Manual strongly suggests that prosecutors recommend sentences within the guidelines range, but also imposes a duty on the prosecutor to recommend a sentence that would not result in an unwarranted sentencing disparity.

Second, defense attorneys should consider using the data in the right circumstances. Defense attorneys can look at the anonymized data available online and see how similar defendants have been sentenced, and point out cases or trends favorable to their clients. Defense attorneys in those few courtrooms where the average sentence is at or above the guideline minimum may want to point out that a within-guidelines sentence might create an unwarranted sentencing disparity given what other judges are doing.

Third, judges may want to discuss with their peers how their sentencing approaches fits with the guidelines and with Congress' intent to avoid unwarranted sentencing disparities, particularly in those districts with wide spreads in sentences.

And, fourth, policymakers and the public may want to examine the sentencing guidelines given this data. Are certain guidelines resulting in offense levels that are too high? Or does the sentencing table itself need to be recalibrated, as a one-level increase in a defendant's offense level means two or three more months at the lower levels but 30 or more months at the higher levels? And those courtrooms where sentences are particularly low might warrant some further examination.

The Booker decision properly gave judges discretion in individual cases, but the effects on overall fairness need to be studied more as many defendants' sentences appear to depend significantly on the judge that they happen to end up standing before.