General counsel from Walmart, Amazon, General Motors and more than 250 other American companies are urging Congress to increase federal funding for the Legal Services Corporation, the country's largest single funder of civil legal aid, despite the Trump administration's repeated calls to ax the program.

In a letter expected to go out Monday, the group noted that LSC grantees provide essential legal services to people who would otherwise face legal problems alone, including veterans, domestic violence survivors, natural disaster victims, elderly individuals, those impacted by the opioid crisis and more.

"The federal investment in civil legal aid brings our country closer to meeting its foundational promise of equal justice for all," the letter states. "It is also good for business. As corporate leaders, we understand that the stability of our communities directly impacts the success of our companies."

"I have no idea what party any of these people belong to, even the ones I work most closely with," Saunders said. "But they're all interested in continuing federal support for the justice system."

In March, President Donald Trump's annual budget proposal said Congress should defund the organization, citing plans "to move the nation towards fiscal responsibility and to redefine the proper role of the federal government."

The bid is the most recent example of efforts to stymie the LSC, which have come up repeatedly over the past 40 years. 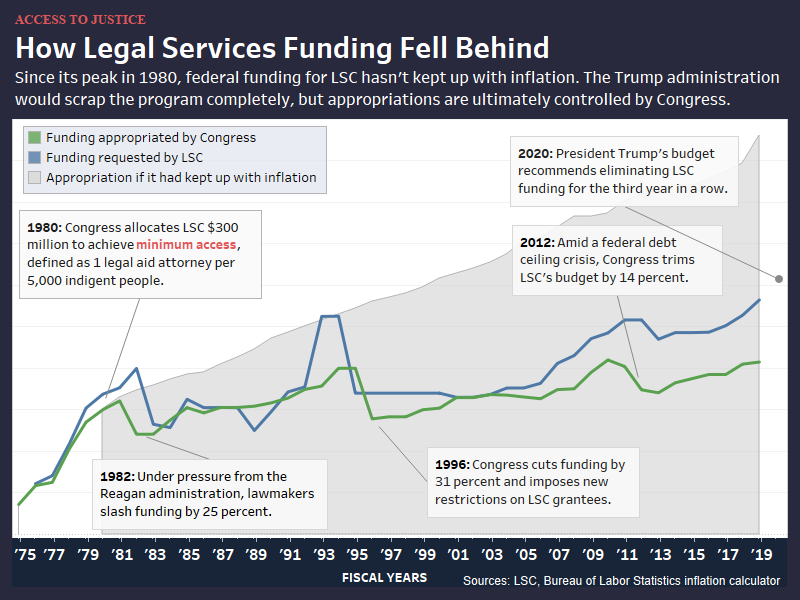 This year, the organization requested $593 million, a sum that would make up roughly .01% of the administration's highest-ever $4.7 trillion suggested national budget.

LSC critics have pointed out that many states provide their own legal aid funding, arguing that legal services issues are best handled on a local level.

The recent letter, however, noted that "particularly in the Southern and Mountain West states, an LSC grantee is often the only source of legal help for those that cannot afford private counsel."

And even as pro bono practices aim to fill in the so-called "justice gap" between the represented and unrepresented masses, the general counsel pointed out that corporate assistance is "made possible by the structure and support network contributed by LSC grantees."

"It's not an indictment of the administration or anything else," Saunders said of the letter. "It's just support for the role LSC plays in creating a strong business climate."

A representative from the White House Office of Management and Budget did not respond to requests for comment.