When a single father found himself separated from his two children and stuck in detention after being wrongfully accused of membership in the international criminal gang MS-13, it came with a bitter irony.

The same gang had forced the father, identified in court filings as “Mr. A,” to flee his home with his 11-year-old daughter and 9-year-old son to seek protection in the U.S. MS-13 had far-reaching influence in Mr. A’s community in El Salvador, with even some members of the police force bearing gang tattoos, according to court filings.

Swept up in the Trump administration’s “zero-tolerance policy” of prosecuting all unauthorized border-crossers, he was on the brink of deportation. 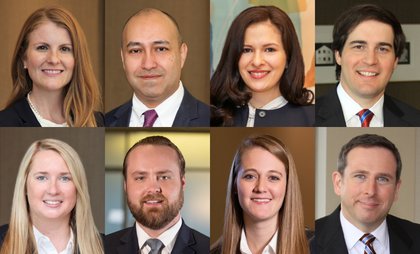 However, Haynes and Boone attorneys stepped in, helping him articulate his fear of returning to El Salvador, reunite with his children and secure release from detention while he awaits a decision on his asylum case.

His children’s sole caretaker for four years, Mr. A had become a target of the gang in April 2018, when members tried to extort a large sum of money from him. He sought protection from Salvadoran law enforcement on several occasions, but they never responded to his requests.

When he failed to pay up, he feared for his and his children’s lives, escaping to another part of the country to live with his uncle. But the gang followed him there and continued to send “extremely graphic” death threats about his children via social media, according to court filings.

Knowing that his family would never be safe from the gang in El Salvador, Mr. A made the journey to the U.S. with his children. They were apprehended at the border in November 2018, and U.S. Customs and Border Patrol officers sent them to a processing station after taking his fingerprints.

CBP officers, however, maintained that he was a member of a gang. His attorneys later found that the officers had searched a government database finding someone with a name and birthdate similar to his who had been reported as gang-affiliated, though his fingerprints were different.

He and his children were sent to a detention facility, where his daughter became ill with persistent diarrhea and had no medical attention, according to their attorneys.

It was then that the zero-tolerance policy touched their family. While he was attending an immigration court hearing in November 2018, officials took away his children without his knowledge.

The separation took a physical and psychological toll on the whole family, especially because Mr. A did not have the funds to pay for phone calls to his children for weeks, according to his attorneys. He became anxious and depressed to the point that he lost about 25 pounds and his hair was falling out, his attorneys said. His children were also distressed, and his daughter developed an eating disorder.

Only weeks after the separation, he had to appear for an interview with an asylum officer to demonstrate that he had the required “credible fear” of persecution in El Salvador. But he struggled to communicate his claims in the interview and did not understand what was happening, all the while asking where his children were, his attorneys said.

He faced a final order of deportation when Haynes and Boone — referred by the Texas Civil Rights Project, a nonprofit that has offered legal aid to separated families — intervened to help reunify him with his children.

In January, while the federal government was shut down, the firm’s team filed a complaint in Washington, D.C., federal court asserting that Mr. A’s constitutional due process rights had been violated and that he had been falsely accused of gang affiliation. The team asked the court to reunify the family, grant him a new credible fear interview and block the government from deporting him while he pursues his asylum claim.

Among the challenges the attorneys faced was proving that Mr. A was not a gang member while the government refused to produce evidence that they claimed supported their accusation, partner Emily Westridge Black said.

“We had to rebut an allegation in the dark, and the team did a great job of pulling together affidavits from Mr. A’s family members, from his employer, photographic evidence of the lack of gang tattoos,” she said. “We were trying to do everything we could to rebut this amorphous and unsupported allegation.”

When Mr. A showed up for his second credible fear interview, he was accompanied by counsel, which made all the difference in such an “intimidating context,” the firm’s Luis Campos said.

In such interviews, which are usually a brief 15 to 20 minutes including translation services, sometimes immigrants may not understand a question from the asylum officer and stumble. But Campos said that he serves as an intermediary.

“The role of an attorney, beyond emotional support, is to facilitate communication between the examiner and the individual,” he said.

Westridge Black added that, in Mr. A’s case and others, she has represented immigrants qualified to relief under U.S. law, but who do not know “what portions of their experience and their trauma are legally relevant.”

“I think there has been a lot of narrative about lawyers helping immigrants make up stories and it’s simply not true,” she said.

After Mr. A’s second interview with counsel, the asylum officer agreed that he had credible fear and referred his case to an immigration judge to weigh whether he should be granted asylum. The firm also represented him at a bond hearing before an immigration judge, who agreed to release him from detention on May 7.

He was reunited with his children the following day. The family now resides in the Pacific Northwest, where the firm has teamed up with local counsel to continue to fight for his asylum claims, the attorneys said.

“To be involved in something that is directly impacting a life and protecting constitutional rights has been such a privilege and an honor,” Westridge Black said.

The U.S. Department of Justice did not respond to requests for comment.