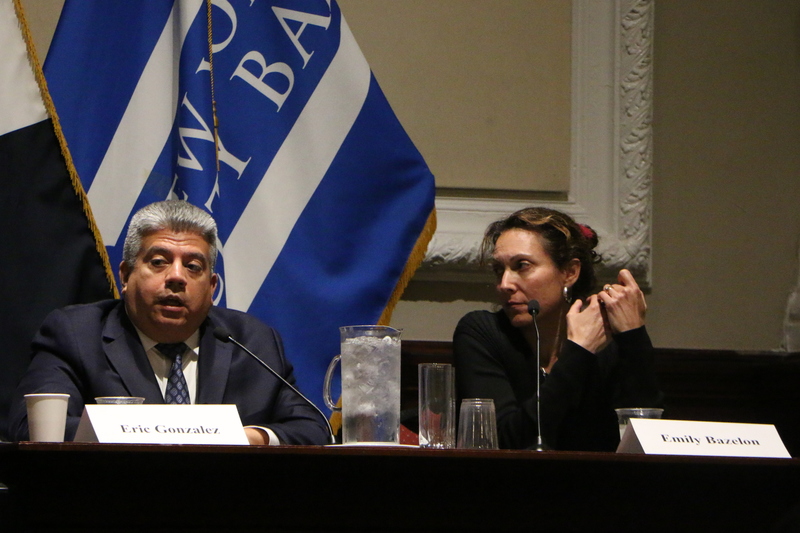 
When Eric Gonzalez was elected Brooklyn district attorney in September 2017, the career prosecutor with Williamsburg roots knew that his peers in New York City's most populous borough already considered themselves progressive.

Compared with the state's other DA offices, they were: Brooklyn prosecutors already practiced open file discovery, which state legislators only made mandatory earlier this year, and the Brooklyn Conviction Review Unit has been one of New York's busiest and most effective since launching in 2014.

"People were saying, 'Well, why would we do more when we're already doing so much more than other places?'" he told author Emily Bazelon last week during an event at the New York City Bar Association. "There was a concern that prosecutors share: Are we going to roll back too much? And then public safety would be jeopardized."

Titled "What Role Should Prosecutors Play in Ending the Mass Incarceration Crisis?," the May 13 talk focused on how Gonzalez has overcome his office's initial fears to promote measures such as wiping out more than 1,400 warrants for misdemeanor marijuana possession as well as ending his office's practice of ordinarily opposing parole.

He responded by describing how prosecutors used to write letters opposing parole 15 or 20 years before a defendant would be eligible. The process was so rote, he said, that law school interns were "writing parole letters routinely over the summer." Now, his office will recommend parole eligibility at the completion of a defendant's minimum sentence.

"By changing that simple default," Gonzalez said, "I think we will have many, many fewer people in our state prisons, because we also give them something to be mindful of: They can actually have the prosecutor support them and get them ready for reentry."

Rethinking standard procedures proved to be a theme of the night, as Gonzalez also described his decision to end the practice of asking for bail "on virtually every case."

"If we didn't ask for bail, we'd better have reasons to justify why," he said, recalling the office's former position. "I changed the default. I said, you know, for misdemeanors at least ... you should be consenting to release with certain exceptions. And if you're going to ask for bail, I want you to justify to me, in writing, why."

Since making that change in 2017, Gonzalez's office has seen a 58% reduction in the number of people being held in jail before trial, according to the district attorney's "Justice 2020" action plan for Brooklyn. But when Gonzalez touted that statistic, Bazelon countered that, technically, judges set bail, not prosecutors.

"Why does it matter so much, what prosecutors ask for?" she asked.

"Prosecutors have enormous power and enormous influence in the criminal justice system," Gonzalez replied. "Judges take their cues from prosecutors."

Gonzalez also highlighted his turn toward "restorative justice" when dealing with victims. The concept, covered in a 2018 book by Bazelon's sister Lara Bazelon, emphasizes victim needs. Gonzalez said he realized those needs were going unmet when he campaigned for the job in 2017.

"I really always heard the same thing, whether the person was white, black, Hispanic, Asian, Russian — it didn't matter," he said. "'If I'm the victim of a crime, the DA's office really doesn't care much about me and is just processing the case.' Just serving one dish — jail — has really led to great dissatisfaction in the people that we serve."

As solution, Gonzalez pointed to Brooklyn Common Justice, a program that brings together young violent offenders and their victims in an attempt to enable true accountability, forgiveness and healing. His Justice 2020 plan states that similar programs, in partnership with New York City's Department of Education, will hopefully help students "avoid prosecution entirely."

Despite all the talk of progressivism, New York's new open discovery laws proved to be one sticking point for the district attorney. As the talk wrapped up, an audience member asked for his take on the state's criminal justice reform bill.

In response, Gonzalez highlighted the fact that Brooklyn already has an open file discovery policy that gives prosecutors roughly six weeks to get most evidence over to the defense. The new state timeline will be just two weeks, a change that he said will force his office to "completely reimagine how we do this work."

"When you talk about the assistant district attorneys in my office who have 200-plus cases, it's a tremendous ask for them to get every ready within 14 days," Gonzalez said. "Quite frankly I think that it may mean that we may have to choose not to bring as many cases."

That prospect has led to internal conversations in his office about pursuing diversion "right out of the precinct," he added.

"Before someone enters the criminal justice system, before they're arraigned, just dealing with the issues by offering services ... that's how I handle drug cases in Brooklyn for the most part," he said. "I think we're going to move forward in a lot of [other] categories, saying 'we just want to offer services ... let's do it from the precinct.'"