While other attorneys were sleeping on the morning of Saturday, Aug. 3, after a long workweek, Bill Brown was standing by the edge of New York Bay, getting ready to jump into the water and swim toward the Statue of Liberty. 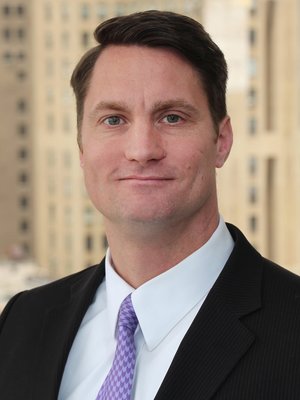 Brown — an associate at McCarter & English LLP who specializes in bankruptcy and commercial litigation — didn't stop once he got to Liberty Island's edge, but rather kept swimming toward Ellis Island, and then Battery Park in lower Manhattan.

Brown was one of nearly three dozen swimmers who navigated the waters between New Jersey and New York on Aug. 3, raising over $185,000 for the GI Go Fund, an organization that offers legal services to veterans in New Jersey and elsewhere.

Most of the swimmers were former Navy SEALs, like Brown, 42, who organized the event as a way to draw attention to and support the needs of veterans who return to the U.S. after challenging experiences abroad and have difficulty readjusting to civilian life.

"Together, we really did a great thing," Brown said. "We're going to help a lot of veterans, and at the same time, we're representing the values that we stand for, like freedom, civil liberties, diversity and perseverance through adversity. These are all things that unite our country."

Brown said he had a difficult time finding a job after returning in 2005 from his third deployment. Prospective employers would gingerly ask him about how he was readjusting, with an eye toward whether he might be a liability because of his experiences as a Navy SEAL, Brown said.

"In the SEAL teams, we have a saying, 'Leave no man behind,'" Brown said. "Unfortunately, some veterans kind of get left behind. Some become homeless. This is our way of reaching back and trying to do what we can to make sure they're not left behind."

Jack Fanous, co-founder of the GI Go Fund, said the organization focuses on assisting veterans struggling to find jobs or places to live. In Newark, the fund organizes a monthly event where veterans dealing with arrests for low-level offenses can inquire about receiving housing assistance and other types of public and nonprofit services, Fanous said.

The organization also connects veterans with pro bono legal services and provides assistance in applying for government benefits, he said.

For many veterans who have fallen behind on child support payments or who have criminal records, one way to deal with the problem is to attempt to disappear, rather than face their problems, he said.

Swimmers individually raised money for the Aug. 3 event, while the fund also accepted contributions on its website, gogo.org. Contributions are still being accepted, Fanous said.

Organizing the actual swim was no easy feat for Brown, who coordinated the effort with local authorities so the swimmers would not get overrun by marine vessels.

He also needed to take account of the currents in New York Bay and the Hudson River, which can change direction about four times a day, Brown said.

As the swimmers were heading in a northeasterly direction, the swim needed to be timed for when the current would be flowing toward Manhattan, as it is so strong that it would be just about impossible to swim against it, he said.

Brown was unable to secure permits for the swimmers to actually get onto either Ellis Island or Liberty Island, so participants instead made pit stops on boats operated by local authorities, where they performed pushups and pullups as part of their journey.

Once they got to land, the participants ran to the September 11 Memorial site, he said.

"I've done the New York City Marathon, and it felt just about like that," Brown said. "It was an experience of a lifetime."