Could Changing The Bar Exam Help Close The Justice Gap?

Most law school graduates sit for the bar exam in July, hoping to pass and become licensed legal practitioners.

But last summer, test-takers in California collectively bombed: Scores hit a 67-year low, with just 55% of first timers and 40.7% of test takers overall passing the bar.

The low scores continued a generally downward trend in the Golden State and around the country, leading three California law deans to implore the state bar to lower its minimum passing score.

The deans wrote a November op-ed in the Los Angeles Times, noting that the state's current "cut" score of 144 is second-highest in the nation behind Delaware, which sees nearly 50 times fewer applicants, and "profoundly out of line with the rest of the country," where the median cut score is 135.

Scores from this year's July test have yet to be released, but Jennifer Mnookin, the dean of UCLA School of Law and a co-author of the November op-ed, said another batch of failures will only widen the access to justice gap in a state with just one legal aid lawyer for every 7,500 low-income clients.

"Obviously, if you lower the pass score in any state, you're going to have more lawyers pass," she told Law360. "California's high cut score is keeping some students from passing who have professional goals that are not in the access to justice space — but plenty of them are." 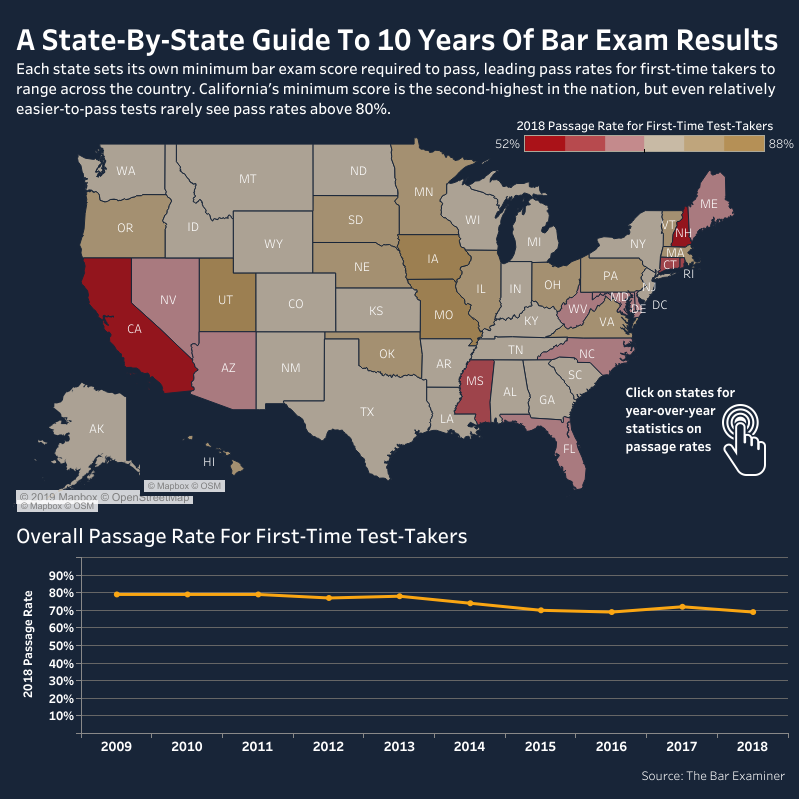 
She added that the purpose of the test is not to keep people out, but rather to ensure licensed lawyers all demonstrate a uniform skill level.

"It's supposed to be a minimum competency test," Mnookin said. "When states either aren't looking closely at what minimum competency requires or have atypically high cut scores like California, they're potentially hurting access to justice in a whole variety of ways."

Her remarks echoed a 2017 letter in which she joined 18 other California law school deans to call for studies into how well bar performance predicts legal practice performance. The letter also pointed out that California's high cut line has a disparate impact on people of color, many of whom would've passed in almost every other state.

The call for more research was evidently well-received: Leah Wilson, the executive director of the State Bar of California, said in a statement that the state is currently collecting information about the knowledge and skills entry level attorneys need.

The results are expected to be published in December and could form the basis for future changes. In the meantime, a similar project by the Institute for the Advancement of the American Legal System, announced July 29, aims to help define what minimum competency really means at a national level.

Led by Deborah Jones Merritt, a professor at The Ohio State University Moritz School of Law, the project will hold 60 focus groups in 12 locations across the country to develop insights into the knowledge, skills and judgment that new lawyers use to serve clients.

"Until recently, there were a lot of attitudes like 'not too high, not too low,'" she said. "'70 to 80% passing, that must be the right cut score.' But there's nothing scientific about that."

"If you think a client will have a cause of action for negligence against another party, you would double check what the elements of negligence are in your state," Merritt pointed out. "You would also check the statute of limitations — you wouldn't just remember it from memory."

The National Conference of Bar Examiners, which produces the licensing tests used by most jurisdictions for admission to the bar, is also conducting a national-level survey to determine what new lawyers need to know in order to do their jobs.

But Judy Gundersen, NCBE's president and CEO, told Law360 that "it's a little speculative" to suggest that the access to justice gap will be bridged if more lawyers are admitted.

"It's not that there's a shortage of lawyers — it's that they are out of reach for people," she said. "The cost of legal services seems out of reach, and sometimes people don't even know they need a lawyer."

On internet message boards, some disgruntled bar exam takers have pointed out that the pass rates of medical school boards — which ranged in the high 90s last year — routinely surpass pass rates for the bar exam. Gundersen, however, countered that law and medicine have very different educational models, making the comparison akin to comparing "apples to oranges."

"Why does law have to be different?" she said. "Do we want the bar exam to leave out people who are perfectly qualified in order to make sure we don't let anyone in who isn't qualified?"

Lawyers themselves often raise staunch opposition to the idea of lowering the bar. Chris Allgreen, a personal injury lawyer admitted to California's bar in 1987, was one of several attorneys who penned letters to the editor in response to the deans' November op-ed.

His said the deans "should be given the same weight as an association of tavern owners that seeks to reduce the drinking age."

When contacted for a follow-up response to Mnookin's remarks, Allgreen told Law360 that the low passage rate is not because the bar exam is getting more difficult.

"I think people coming out of college and law school are not as well-prepared, maybe because they read less," he wrote in an email. "So an influx of poorly prepared lawyers is not the solution."

Allgreen added that simple legal matters could be handled by paralegals and other near-lawyer alternatives, an idea that's gathered steam in states like Washington, where limited license legal technicians are allowed to help people in family court disputes like divorce and child custody.

NCBE Chief Strategy Officer Kellie Early said Washington's program and others like it are contributing to an ongoing debate within the profession.

"You have to think about what types of services the vulnerable need the most," Early said. "Do those services need to be restricted to lawyers?"

Merritt, however, noted that some services likely to remain restricted to attorneys, such as criminal court appointments to represent indigent defendants, still require skills that the bar exam scarcely covers.

In her work supervising students in prosecution clinics, she's noticed that the lawyers on the other side are not always "what the client deserves" because they lack basic negotiating skills.

For her, the fact that such skills are not currently evaluated by the bar exam shows the test needs to be reconfigured, not necessarily made easier.

"Even if we had exactly the same number of lawyers admitted with a reformatted bar exam," she said, "I think access to justice would improve because we'd have better lawyers — especially the lawyers who serve people with limited money. Because people with lesser means are the ones who are most likely to end up hiring a fairly junior lawyer."