5 Justice Battlegrounds To Know Ahead Of Thursday's Debate 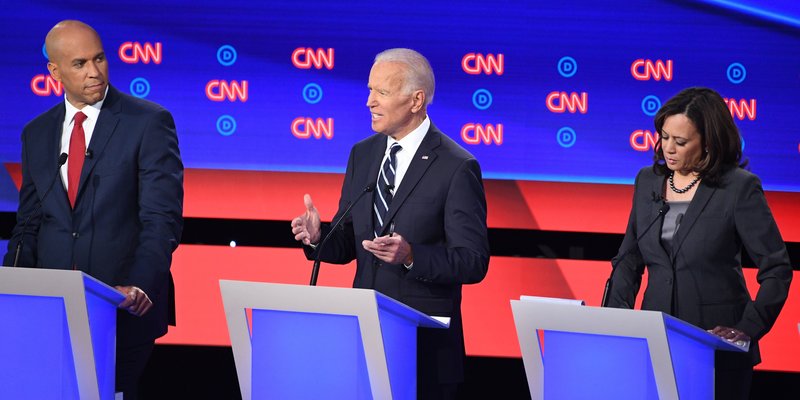 Democratic presidential candidates like Cory Booker, Joe Biden and Kamala Harris have made access to justice a key theme of their campaigns, signaling the rising profile of issues like bail reform, fines and fees, clemency and more. (Getty)


On Thursday, 10 candidates for the 2020 Democratic presidential nomination will take the stage at Texas Southern University in Houston to debate topics like health care, the economy and climate change.


Near the top of the list will be criminal justice reform, a fact that makes next year's election a "watershed moment," according to Udi Ofer, deputy national political director of the American Civil Liberties Union.

"The issue of criminal justice reform is a rare island of bipartisan agreement in a sea of political bickering," he said. "We're seeing that candidates for president realize voters want bold, audacious ideas about how we will end mass incarceration in the United States."

The focus on criminal justice reform, however, has largely eclipsed problems in America's civil justice system. No campaign has detailed plans to support legal aid funding, for example, or to make courts easier to navigate for self-represented litigants.

The candidates all have their own plans for change. Here, Law360 breaks down their policy proposals and what the plans indicate about America's justice system and its future. 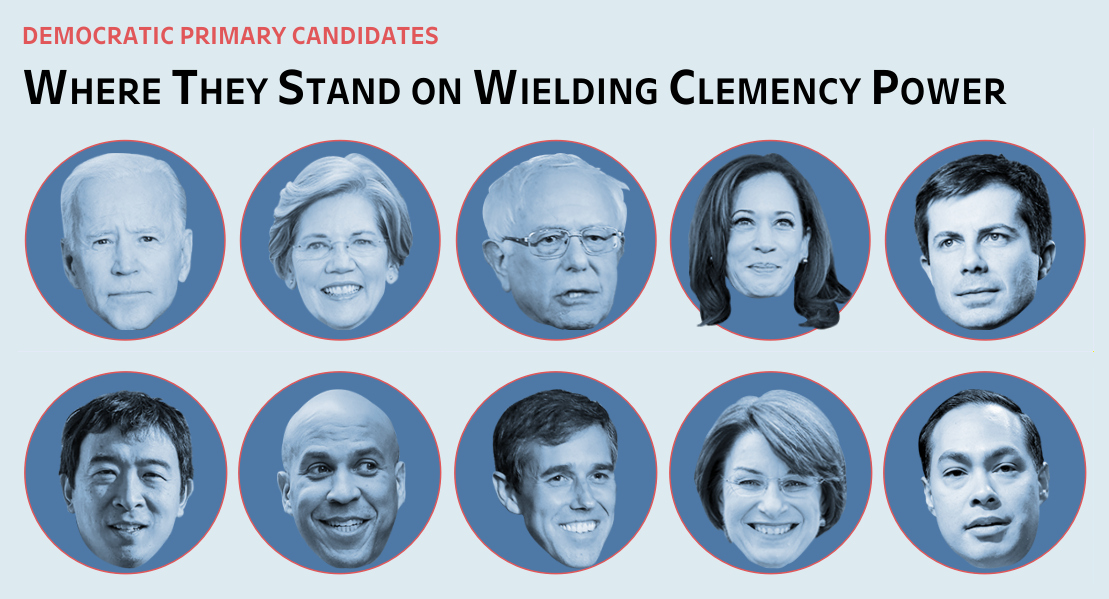 
Presidents once routinely granted clemency to at least 10% of each year's applicants, but over the past four decades, grant rates have plummeted to nearly zero. At the same time, applications for pardons and commuted sentences have soared.


Six of the 10 candidates set to debate Thursday have explicitly addressed presidential clemency in campaign materials. Of the four who haven't, two have discussed mass pardons in interviews.

Many of the plans, including those of Warren, Sanders, Buttigieg and Booker, involve removing some authority from U.S. Department of Justice, the agency that controls the clemency process and recommends candidates to the president. Some candidates want to form a new clemency board in the White House; others talk about establishing independent clemency commissions.

For former U.S. Pardon Attorney Margaret Love, such platforms are problematic because they appear to cut the DOJ out of the process entirely "without considering the essential role that agency must play."

"None of them propose to reform the Justice Department's clemency program but instead would replace it with a new bureaucracy to do a job that Justice has done for more than 100 years and could do well if properly directed," she said.

All 10 campaigns either declined to comment or did not respond to requests for comment on this story.

Love highlighted Klobuchar's proposal — which would augment the process by creating a new position at the White House that "advises the president from a criminal justice reform perspective" — as the one most likely to produce practical results in the short and long term.

On the other side of the spectrum is Biden, who has indicated plans to continue in President Barack Obama's footsteps by using the current system to focus on nonviolent and drug crimes. Sam Morison, a former staff attorney in the Pardon Attorney's Office who now represents clemency seekers, told Law360 that Biden's plan is "lazy" because it leaves all control in the hands of the DOJ.

"The critical issue is to get the pardon advisory function out of the clutches of DOJ, which has an entrenched and intractable conflict of interest in these cases," Morison said.

Like Biden, Yang and Harris have also steered clear of suggesting a total overhaul of the clemency process while maintaining they will use the power widely. O'Rourke and Castro haven't addressed the topic in campaign materials. 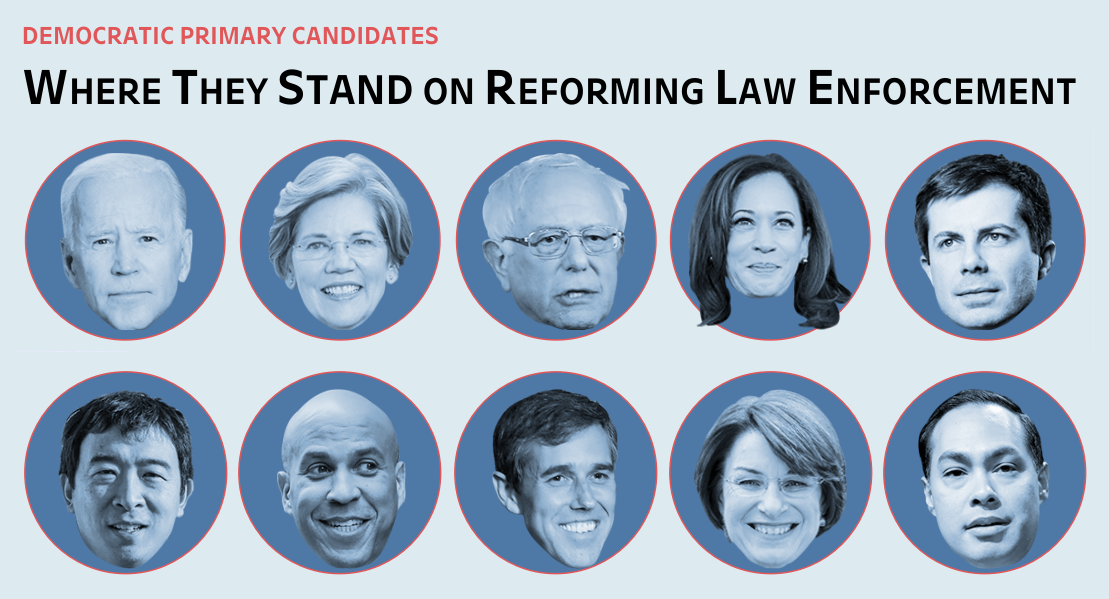 
Prompted by police shootings, revelations of racism in police social media groups and concerns over racial profiling, every candidate slated to appear Thursday has advocated for reforming law enforcement in some way.

Several candidates have also proposed prosecutorial reforms, like Warren's idea to establish open-file discovery, where prosecutors share their evidence with the defense as soon as possible, and reduce the use of coercive plea bargaining at the federal level, or Sanders' plan to limit absolute immunity for prosecutors. Others, like O'Rourke and Buttigieg, have said they would support community policing practices.

For Clark Neily, vice president of criminal justice at the Cato Institute, many of the candidates' proposals represent a focus on "low-hanging fruit" instead of more fundamental problems, like the country's reliance on plea bargaining instead of jury trials for criminal convictions.

"The criminal jury trial is essentially extinct," he said. "But that's the only way you're going to process more than 10 million people through the system, which is what we've committed ourselves to through overcriminalization. None of the candidates are focused on that."

Despite his criticism, Neily praised Sanders and Warren's pledges to limit or restrict the use of qualified immunity, a doctrine that protects law enforcement from lawsuits over actions they take in the line of duty.

"Qualified immunity is the cornerstone of our near-zero accountability policy for law enforcement," he said. 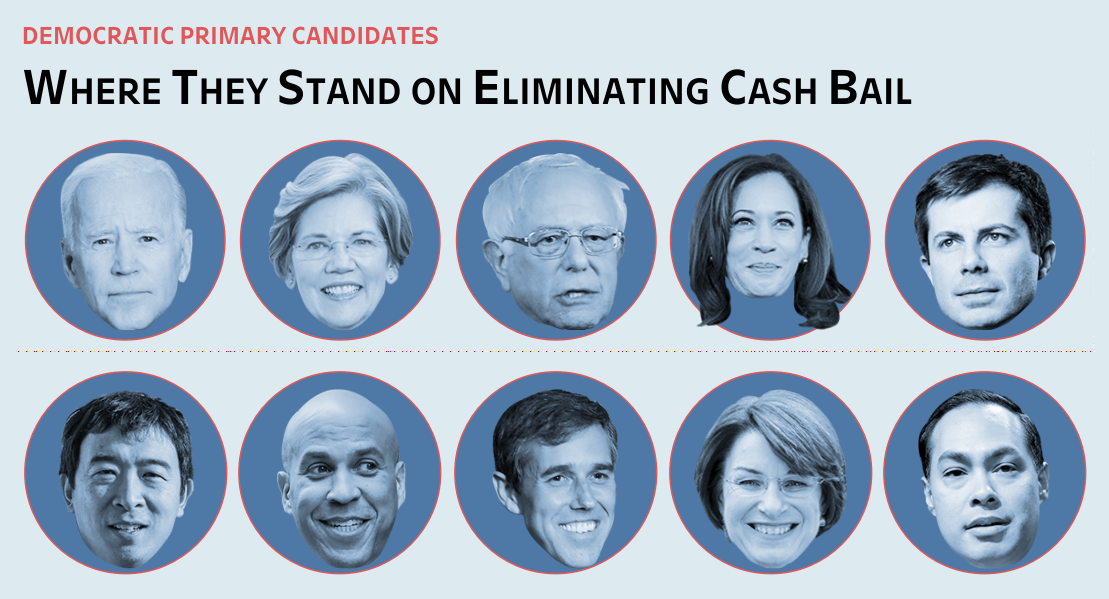 
Bail reform has been a particularly hot topic this year, with groups from California to Pennsylvania challenging the practice that puts indigent defendants in pretrial detention and lets richer ones walk free.


Eight of the 10 leading Democratic candidates have explicitly called for an end to cash bail, while Klobuchar has stated support for reforming the system and Castro has said "for far too many poor people who can't afford bail, an accusation alone can swiftly turn into a jail sentence."

The challenge, according to the ACLU's Ofer, is that the federal government is not actually in charge of individual city and state bail policies. That reality is reflected in the candidates' relatively sparse policy proposals, but Ofer said the fact they're even talking about reform in the first place could transform the politics of the issue.

"Whoever is the eventual nominee for the Democratic or Republican parties is then the party's primary spokesperson," he said. "The tone they set … can change the state and local politics of that party."

Of the various campaign proposals, only those of Biden and Sanders have addressed concerns that a replacement pretrial system needs to be designed so as to prevent further discrimination or bias.

Those concerns have swirled around proposals to replace bail practices with the use of risk assessment algorithms. The ACLU originally supported a bill in California that eliminated cash bail, only to reverse its position at the last minute in opposition to the assessment tool that would replace the bail system.

"We're really wanting to get rid of pretrial detention and wealth-based incarceration," Ofer said. "While ending cash bail is a vital first step, even more important is what alternative system is put into place." 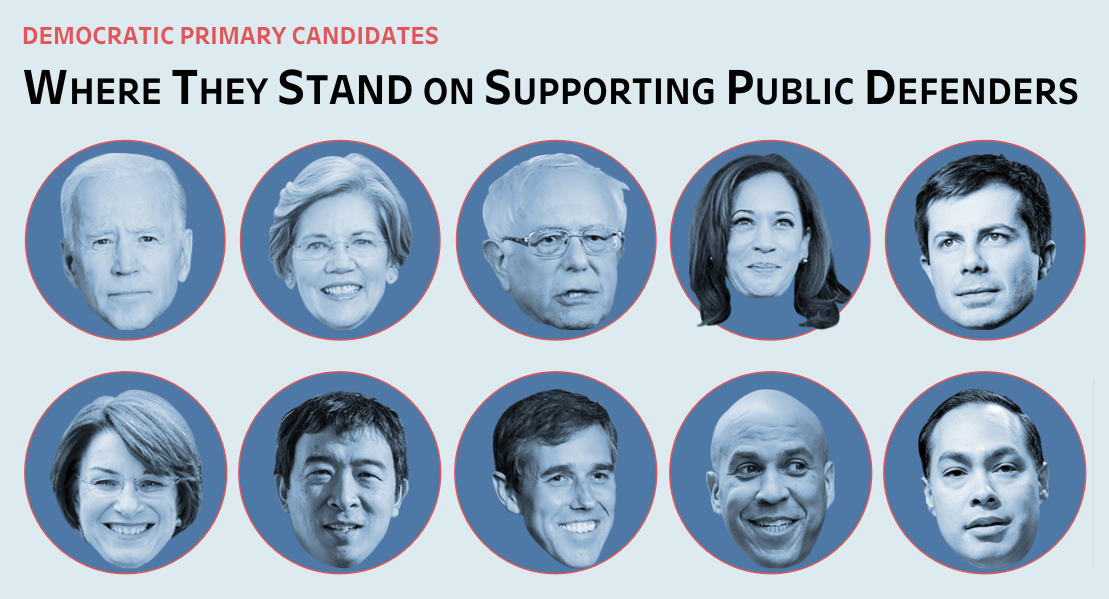 
The Sixth Amendment guarantees a right to counsel for criminal defendants. The reality is that public defenders are often too overworked, underpaid and, according to lawsuits filed around the country, under-resourced to provide adequate representation.

"Virtually no attention has been paid, historically, to public defense during the campaigns preceding an election over the last 40 years," he added.

Platforms range widely in terms of detail and scope. Biden, for example, has simply said he plans to "expand resources for public defenders' offices." Sanders, on the other hand, has announced a goal of tripling national spending on indigent defense to $14 billion annually and the creation of a federal agency to oversee state public defense services, among other objectives.

Some of the candidates who haven't addressed the issue on their websites have addressed it in other ways. Harris, a former prosecutor, introduced Senate legislation in May that would create a $250 million grant program to fund public defense, establish workload limits and create pay parity between public defenders and prosecutors. Booker introduced his own Senate bill in 2017 that would allow indigent criminal defendants to file federal class actions against states and localities for systemic failures to provide counsel.

For Lewis, the fact that most decisions regarding public defenders are handled at the state level doesn't preclude the president from setting a tone — and instructing the DOJ to set the bar higher for states to obtain federal grants.

"By focusing on public defense using their bully pulpit, a president can do a great deal to nudge policymakers in the states to ensure a level playing field in the criminal justice system," Lewis said.

Castro and Yang have not explicitly addressed support for public defenders. 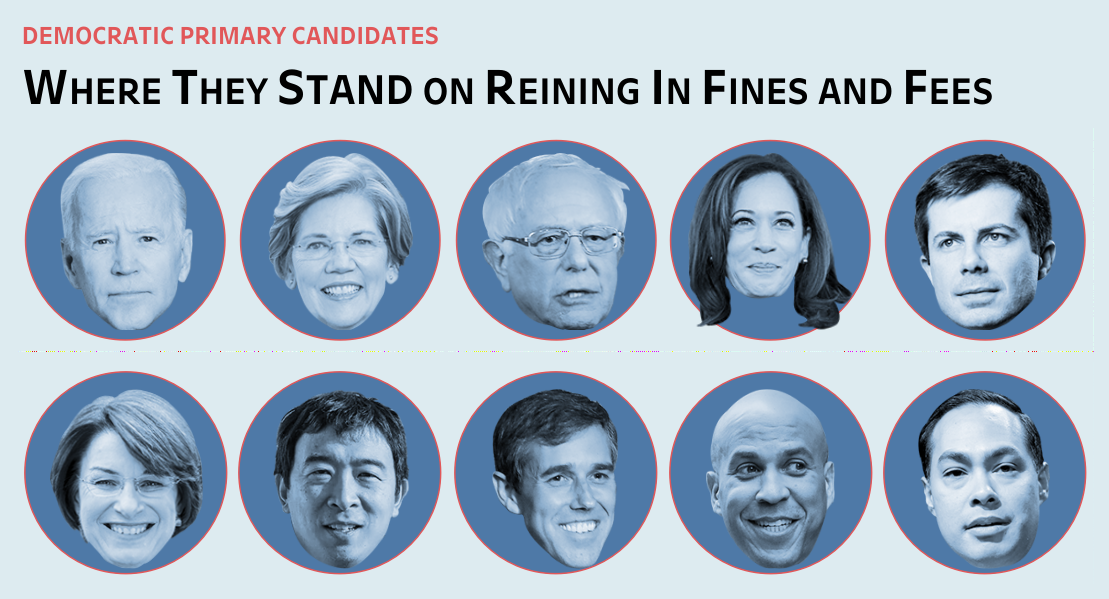 
Criminal justice reform often focuses on police practices and courtroom advocacy, but rising awareness of the way city and state governments rely on fines and fees for revenue has made economic sanctions an issue that is gaining the attention of some of the highest-polling candidates.


So far, Biden, Warren, Sanders and Buttigieg have proposed steps to reduce or end reliance on fines and fees. The other six candidates haven't explicitly addressed the topic in their campaign websites.

A common theme in the available proposals is an emphasis on working with state governments, where most fines and fees policies are determined. But Beth Colgan, a UCLA School of Law professor, noted that the federal government also uses economic sanctions, such as mandatory minimum fines, restitution awards and a heavy reliance on forfeitures, as a way to mete out punishment.

"Just as is the case at the local and state level, these punishments may be imposed on people who have no meaningful ability to pay," Colgan said.

Alexes Harris, author of the 2016 book "A Pound of Flesh: Monetary Sanctions as a Punishment for the Poor," said the best platform will be one that mandates hearings on a defendant's ability to pay, provides more public access to data on issued fines and fees, and prevents people from being incarcerated for being unable to pay.

The fact that several candidates have promoted those ideas, she said, "indicates they are researching and talking with people on the ground about these problems."

"I would hope the other candidates would engage with these issues and weigh in with their thoughts," she said.