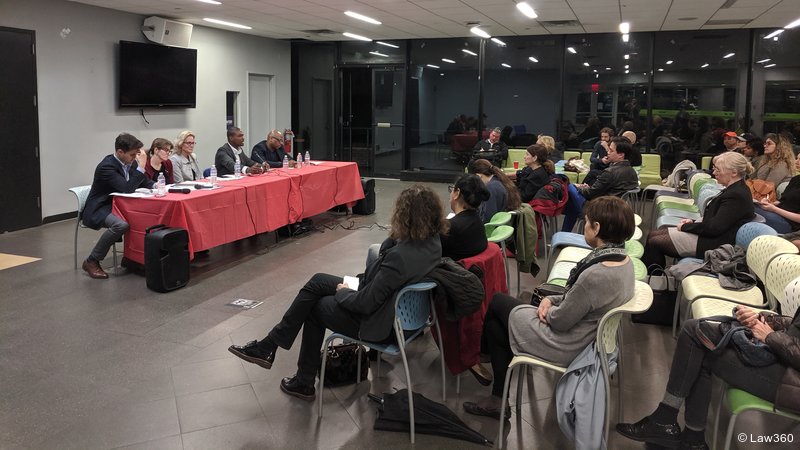 The closing of Rikers Island and problems surrounding mass incarceration were the focus of an Oct. 22 panel at Hunter College. From the left: Billy Freeland of Paul Weiss Rifkind Wharton & Garrison LLP, Abigail Swenstein of The Legal Aid Society, Cheryl Roberts of the Greenburger Center, Karume James of Bronx Defenders and Marvin Mayfield of Just Leadership. (Reenat Sinay | Law360)


New York City's move to close the notorious prison Rikers Island could be an important step in making sure people suffering from mental illnesses, who make up half of America's incarcerated population of 2.3 million, aren't lost in the criminal justice system, according to speakers at an event on the problems of mass incarceration.

Those who decades ago would have been treated in asylums — which have their own shadowy history of mistreatment — now might find themselves on the street and eventually swept up in courts and prison, often facing higher level felony charges, according to Cheryl Roberts, executive director of the Greenburger Center, which aims to divert people with mental health struggles away from jails and into treatment.

Incarceration only exacerbates their symptoms, Roberts said during the Oct. 22 panel discussion hosted by Community Board 8 Manhattan at Hunter College.

For example, some conditions require very precise cocktails of psychotropic drugs tailored to each specific person that are often impossible to replicate with the limited availability of medications in prison, according to Roberts.

The sometimes erratic behaviors displayed by some inmates due to being off their medications, suffering uncomfortable side effects or being given the wrong doses can be misinterpreted as breaking the rules and result in harsher treatment by correctional officers, she said.

Marvin Mayfield, a New York state organizer for the decarceration advocacy group Just Leadership who spent 11 months at Rikers in the 1980s, attested to seeing inmates with mental illness being kept in separate, completely empty, feces-covered cells with only a hole for a toilet.

Roberts and Mayfield were joined on the panel by Karume James of Bronx Defenders, Abigail Swenstein of The Legal Aid Society and moderator Billy Freeland, an attorney at Paul Weiss Rifkind Wharton & Garrison LLP and secretary of CB8. New York City Council member and chair of the criminal justice committee, Keith Powers, also made an appearance.

The council voted on Oct. 17 to close Rikers Island by 2026 and replace it with four new facilities to be scattered throughout four of the city's five boroughs. The new jails will be built to hold half as many inmates combined than the 7,000 that Rikers currently houses.

The goal, according to the city, is to improve conditions for incarcerated people by shrinking the size of the facilities and offering more job training, education and mental health services.

Roberts said she is concerned about people with mental illnesses being incarcerated at all, citing a successful redirection program in Florida's Miami-Dade County she hopes the New York will one day emulate.

James, one of the two public defenders on the panel, agreed with Roberts about the connection between mental health, poverty and race, and how housing, or lack thereof, is at the root of it all.

"People are targeted because they don't have a place to stay," he said.

The true impetus behind closing down Rikers Island is "to save lives," according to Mayfield, who described his time in pretrial detention in harrowing detail.

"I thought I would die; I thought that was the way I would leave this earth," he said, recalling trying to suck in air through the crack under the door to keep from passing out during an August heatwave in a facility that still has no air conditioning and poor ventilation more than 30 years later.

There can be subtle ways that thousands of largely black and brown people in New York City find themselves caught in what James calls "the tentacles" of the criminal justice system "all the time."

"Something as simple as a driver's license suspension can have really serious effects on someone's life," he said.

Oftentimes, James said, people aren't even aware that their licenses have been suspended due to unpaid tickets, but they can be arrested and essentially forced to plead guilty to driving with suspended licenses, leaving them with criminal records that can have a far-reaching impact.

Another way in which people of color, usually transgender women and immigrants, wind up in the system is through a law against loitering with the intent to commit prostitution, Swenstein said, a public defender who advocates for sex workers and human trafficking victims.

The loitering law, whose targets are 90% black or Latinx, is just "a way to harass trans women and women of color," according to Swenstein. "Our system needs to be responsive to these people" and their vulnerabilities, she said.

While arrests for sex work-related offenses don't always result in a criminal record, they do seem to be a feeder into the criminal justice system, according to Swenstein, who said she is seeing more and more people come through Legal Aid on more serious criminal charges who also have a history of sex work.

Like James and Roberts, she stressed that housing is the "main cause" of the criminalization of sex workers, voluntary or otherwise, who are often driven to that type of work out of poverty.

In another example of how poverty can trap people in jail, the panelists pointed to the state's cash bail system. While a new law will end the system in January, cash bail has punished people by keeping them in prison while they wait for their trials simply because they cannot afford to post bail, they said.

Mayfield said he was one such example. At 22 years old, he had just returned from military service in the U.S. Air Force when police picked him up while he was walking down a street in the Bedford-Stuyvesant neighborhood of Brooklyn.

He was accused of a nearby burglary and kept in custody because he and his family couldn't pay the $10,000 needed to bail him out. Mayfield soon wound up at Rikers, where he suffered vicious beatings resulting in a broken leg within the first few days, and ended up waiting several months for court dates.

The vast majority of prisoners at Rikers have not been convicted of a crime, but are actually in pretrial detention, often because they weren't able to afford bail. Those incarcerated people are innocent in the eyes of the law, he said.

Although Mayfield said he knew nothing about the burglary for which he was charged, he eventually took a plea deal, as many incarcerated people feel forced to do, just to escape the everyday horrors of Rikers.

According to James, there are "many other ways" to process people accused of crimes while they wait for trial in ways that don't involve locking them up in places like Rikers.

"It's not just a building," James said. "This is about the dehumanization of black and brown people."

In addressing the four new borough-based prisons set to replace Rikers, a facility that is located on an island in the East River out of sight and therefore out of mind for many New Yorkers, James spoke vehemently against building any new jails at all, drawing raucous applause from some in the audience.

But Mayfield took a more measured approach and said that while new jails aren't ideal, they are a step in the right direction, particularly for those who have been convicted of violent crimes.

"I'm not happy about building new jails, but it's necessary to move forward in treating incarcerated people more humanely," he said. "Until we reach the utopian status of not needing to separate people from the rest of society, we will need some place for people who hurt others to be kept in a compassionate way."