How Local Courts Sidestep The Right To An Attorney 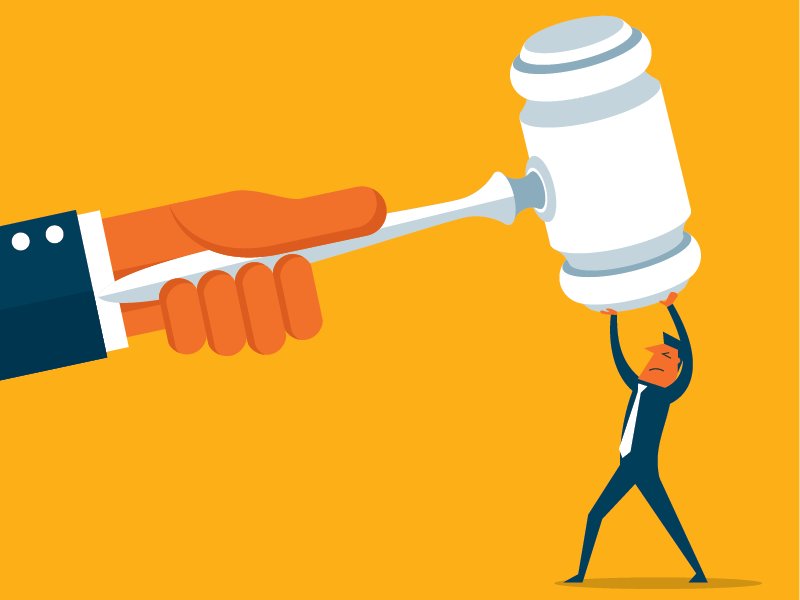 
After local court trials in which they couldn't afford attorneys and received no court-appointed counsel, Tina Bairefoot, Dae'Quandrea Nelson and Nathan Fox each spent at least two weeks in a South Carolina county jail in early 2017.


Their experiences led to an American Civil Liberties Union lawsuit against Beaufort and Bluffton, the small towns outside Hilton Head that operated the courts where all three were tried. Litigation paid off earlier this month, when both towns agreed to start contracting with a nearby public defender's office to ensure the right to counsel. 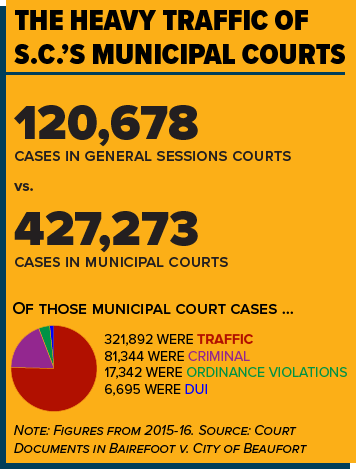 Ezekiel Edwards, the ACLU attorney on the case, said he hopes the Oct. 7 settlement sends a signal to other towns and cities that choose to operate municipal courts and collect fines and fees but fail to provide indigent defense.

"If you are going to pay to prosecute people," he said, "you have to pay to defend them."

According to the ACLU, nearly 140 other courts in the state had no public defenders available in October 2017, when the suit was filed. Though Edwards noted some of those courts might have had contracts with private attorneys to provide indigent defense, he said such arrangements are not the most reliable way to ensure the right to counsel.

"That private attorney may not show up in court every day, or have the resources they need — they also may focus most of their attention on their own caseload," he said, pointing out that Bluffton allegedly had a private attorney contracted to provide public defense when Nelson was jailed without counsel.

Judge Danny Singleton, president of the South Carolina Summary Court Judges Association and a small-town municipal court judge, said he's not aware of any local judges still holding trials without providing indigent defense, but didn't distinguish between those contracted with public defenders and those reliant on local private practice.

"To my knowledge, everyone's compliant — but then again, they don't report it to me," he said.

The uncertainty over how effectively South Carolina municipal courts are providing the constitutional right to counsel reflects a nationwide concern about America's most localized justice halls, which handle traffic tickets, city ordinance violations and, in some states, low-level misdemeanors like shoplifting that carry up to monthlong jail sentences.

According to David Carroll, the executive director of the Sixth Amendment Center, Beaufort and Bluffton are just the tip of the iceberg when it comes to local courts with right to counsel problems. At least 11 other states allow city and town-run courts to handle jailable offenses but require those courts to fund their own public defense systems, with little oversight.

"It's America's dirty little secret," he said. "Thousands of people go to jail every day in this country without ever speaking to an attorney."

Incarcerating poor people without offering counsel has long been understood to be unconstitutional. In 1963, the U.S. Supreme Court's Gideon v. Wainwright


But ensuring courts actually provide competent counsel is a notoriously fraught process. States are constantly being accused of failing to properly fund indigent defense, and public defenders are infamously overworked.

At the local court level, providing right to counsel is even more problematic. 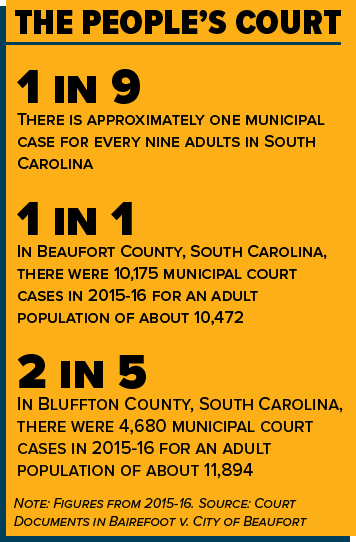 Municipal courts are also more idiosyncratic than state-level counterparts. South Carolina municipal judges, for example, do not have to be lawyers, have legal experience or even have a college degree, though 14 hours of training per year is required. Prosecutors in the cases are often the police officers who made the arrest. Trials routinely last three minutes or less.

Judge Singleton said the concept of local justice centers dates back to precolonial England and touted their efficiency in producing timely justice and preventing larger courts from becoming even more backlogged than they already are. He also said they provide convenience.

Local courts have another benefit: South Carolina's 200-plus municipal courts collect approximately $20 million per year, mostly from fines and fees.

According to Joanna Weiss, a co-founder of the Fines and Fees Justice Center, it's no surprise that constitutional violations occur in local courts because many of them primarily serve their town or city's bottom line.

"More and more of the town and village courts are being used to raise revenue," she said, adding that those without counsel are less likely to contest court-ordered payments. "Courts extract money from poor communities because they have no representation and people don't know their rights."

She ascribed the increasing reliance on for-profit courts, in part, to the 2008 financial crisis that cut into local governments' funding streams. She also noted that more and more states are limiting municipalities' funding in other ways, like slashing property taxes.

"As a result, they turn to fines and fees ... which creates an unholy alliance between police, city hall and the courts," Weiss said.

The most famous example of such municipal court abuse is Ferguson, Missouri, where a 2016 Department of Justice report found that nearly one-fourth of the city budget came from fines and fees that were disproportionately levied against people of color. Missouri is one of the 12 states that leave public defense in municipal courts up to local government.

Reliance on courts for funding can also lead municipalities to cut corners, as the ACLU alleged in the South Carolina case.

The state covers the cost of public defender services in its state-level "general sessions" courts, which handle felonies and serious misdemeanors, but in 2015 its Legislature clarified that local municipal courts — operated at the towns' discretion — have to fund public defenders services themselves.

At that time, according to Bluffton city attorney Terry Finger, Bluffton contracted indigent defense services to a private attorney. But when Nelson was tried on assault charges in Bluffton Municipal Court, no one mentioned the private attorney as an option. Nelson represented himself against prosecution by the school resource officer who arrested him.

The Beaufort city attorney's office did not respond to requests for comment on how it provided indigent defense before the suit. But the ACLU has said that town had no indigent defense contract at all, citing court records showing no defendants paid public defender application fees and the experiences of Bairefoot and Fox: Neither one was offered a court-appointed lawyer.

Under the Oct. 7 settlement, Beaufort and Bluffton must now provide defendants who might face jail time written and oral notice of their right to hire a lawyer, or if indigent, to have one appointed to represent them.


The deal also prohibits trials in absentia — ones where the defendant isn't physically present — and requires an assessment of whether defendants can pay the fines they're charged. Those who can't afford to pay are now due alternatives, payment plans or extensions according to the agreement.

The 14th Circuit Public Defender Stephanie Smart-Gittings told Law360 that her office is "extremely excited" to start providing services in Bluffton and Beaufort municipal courts. Like Edwards, she argued that contracting with private attorneys can open the door to an ineffective defense.

"Private attorneys would have cases in other courts, and municipal courts have the lowest priority," she said. "Public defenders, all we do is public defense."

Finger said his town is also excited to help participate in what could be "a model for other municipalities to follow suit."

Other reform efforts around the country have shown that litigation isn't the only way to ensure local courts comply with the Constitution. 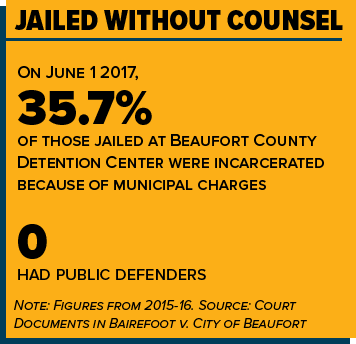 In New Orleans, for example, a group called Court Watch NOLA monitored hearings and trials at the municipal level and produced a report in 2017 that highlighted right to counsel issues in local courts.

Volunteer observers noted that one in two unrepresented defendants pled guilty and were typically sentenced to pay a fine or serve community service. Failure to pay or complete the service would leave those defendants subject to arrest, but no counsel explained that to them. In fact, they noted many judges pressuring defendants to waive counsel.

The report generated reams of headlines and convinced some judges to change their practices. Last month, Court Watch NOLA launched a right to counsel assessment program, which will include another round of court monitoring to measure the reach and impact of those changes, according to the organization's executive director, Simone Levine.

"Individual judges' practices are not consistent with the practices of their fellow judges," Levine said. "And that's why the right to counsel assessment project that we're doing with them must transform the whole entire process so the courts can work on one consistent and unified approach."

But rule and practice changes can only do so much, according to Alexandra Natapoff, a law professor at the University of California, Irvine, and the author of "Punishment Without Crime: How Our Massive Misdemeanor System Traps the Innocent and Makes America More Unequal."

She pointed out that right to counsel problems in municipal courts are just one aspect of the systemic flaws that afflict America's broader misdemeanor system, which includes state courts too. As an example, she pointed to Florida's state-run misdemeanor courts, where trials routinely take place in three minutes or less.

"The challenge for municipal courts, as with low-level misdemeanor courts more generally, is to appreciate how important they are," Natapoff said, noting that misdemeanor tier handles 80% of all criminal cases in the country.

"It's not enough to fix the right to counsel," she added. "The deeper challenge, which I think is beginning to happen, is to take the misdemeanor system and the low-level courts seriously. Once we appreciate that these cases are not minor and that their punishments are not petty, then we are teed up to make sure that cities, counties and states take seriously the protections that our Constitution requires."