When Petty Officer Kylie Bowers moved to her new post at Fort Meade in Maryland, they secured a townhome on the base with enough room for Bowers, her husband, and their 1-year-old son.

But over the next year, the home had repeated problems with mold and water damage, causing Bowers and her son to develop persistent health problems, while the private company that managed the property made only minor fixes and refused to even provide the results of its mold testing, according to a new lawsuit filed by the Bowers and other families on the base. 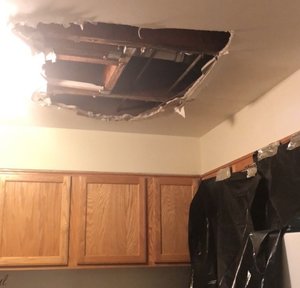 Sergeant Joseph Addi alleges that Corvias was forced to cut a 4 foot by 4 foot hole in his family's ceiling in an attempt to locate a leak after months of attempts to allegedly ignore the house's problems.

The suit, filed Tuesday in Maryland federal court, accuses Corvias Management of lining its pockets by scaling back maintenance and repairs for properties at Fort Meade and subjecting them to substandard, mold-infested housing in the process.

“The conditions were causing injuries, both economic and healthwise,” said Kevin Collins, an attorney with Covington & Burling LLP who is representing the families on a pro bono basis. “I think [the company was], frankly, more than happy to try to make the problem go away by saying things that weren’t true.”

He added, “It’s not like this was a one-off problem. ... It’s really distressing.”

The suit seeks to represent the interest of all families on the base who have had mold problems, which could potentially be more than 800 families. It accuses the company of violating state and federal law, fraud, breach of contract, and gross negligence.

According to Collins, the corner-cutting by private housing companies — the military often outsources the management of housing for service members — is common on military bases and likely extends well beyond Fort Meade. 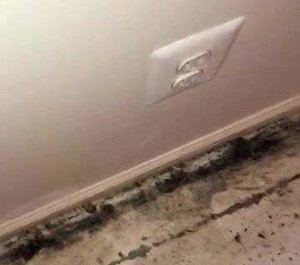 Hospital Corpsman Derek Buitrago and his wife say that they found mold growing under their carpets, but that Corvias never replaced the carpets or addressed the moisture problem.

In fact, in October, a similar suit was filed in Texas, alleging that another company, AETC II Privatized Housing, failed to properly maintain properties on two Air Force bases.

As outlined in the complaint filed against Corvias, the property management companies earn money by collecting service members’ monthly basic allowance for housing, or BAH. This amount, which is calculated based on average rental prices in the area, is automatically transferred to the companies each month that a service member lives in a company property.

However, this arrangement means that companies’ revenue is more or less fixed, meaning they are incentivized to cut costs wherever possible, including on maintenance, according to the complaint.

On Fort Meade, multiple families have signed onto the current suit, all alleging that Corvias persistently ignored mold problems in their homes, among other problems. The neglect continued even as the service members and their families, including young children, developed health problems associated with mold such as respiratory issues.

One family detailed multiple instances of repairmen coming to inspect visible mold growth and simply wiping it off without investigating the sources of mold or the source of the house’s moisture problems. The same family later discovered mold under their carpets and found that water damage had rotted out beams under their son’s second-story playroom. 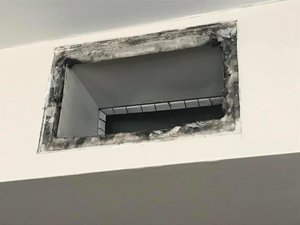 Petty Officer Andrew Gilliland and his wife allege that they discovered black mold growing in their air vents after hearing reports of mold from other families on the base.

Another family allegedly found mold growing inside their HVAC unit, even after Corvias had treated the house for mold and declared that the problem was resolved.

The moisture problems in one house were so pervasive that workmen tried to cut through the kitchen ceiling to locate a leak, the complaint alleged. The leak was never properly sealed, according to the family.

A family with a son on the autism spectrum alleged that after their children started getting sick from mold exposure, Corvias initially refused to test for mold. After an independent test confirmed the presence of mold, the company attempted to pressure the family to move into a two-story housing unit that would have been unsafe for their son, because Corvias did not want to pay for a hotel, the complaint said.

The same family was also eventually forced to throw out numerous mold-infested belongings, including stuffed animals that were calming for their son, as well as his special sensory swing, causing him ongoing distress, according to the complaint.

Multiple families also alleged that Corvias ran industrial air purifiers in their home prior to testing, that the company’s efforts to fix mold problems were ineffective, and that representatives did not appear to take the problem seriously, even after family members became sick.

“While we as a Nation honor our servicemembers and their families, on U.S. Army Installation Fort George G. Meade, [Corvias] have instead subjected these servicemembers to appalling housing conditions and cavalier treatment,” the complaint said.

The suit is asking for damages for the families, and a court order that would require third-party testing of all housing units on Fort Meade and prevent Corvias from collecting BAH from service members while their homes still tested positively for mold.

“We continue to get outreach from families [on the base],” Collins said. The issue, he added, is not going away.

Corvias did not respond to a request for comment.