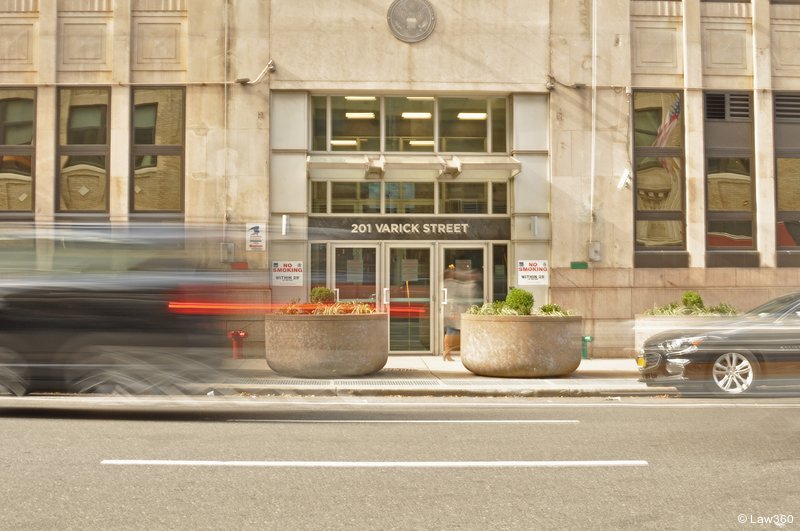 Varick Street Immigration Court in New York is among the facilities that have stepped up their use of video teleconferencing for hearings, raising concerns among some advocates about the reliability of that technology and immigrants' access to counsel. (Kevin Penton | Law360)


As 15 women were ushered into a holding room one October morning in an immigrant detention center in Mississippi, their images filled the television screen mounted at the Varick Street Immigration Court in New York City where their pleas for asylum were going to be heard, some 1,300 miles away.

The hearing in the courtroom, which is outfitted with a camera, a translator, a representative of the U.S. Department of Homeland Security and an immigration judge, was held to begin the processing of those detainees and determine their next appearance date, as expeditiously as possible.

Welcome to the world of video teleconferencing, which the federal government has increasingly used in immigration proceedings across the country since 2017 to try to whittle down a massive backlog of cases. At the same time, critics have pointed to breakdowns in the technology and wonder if it is limiting access to counsel for detainees, who can be warehoused hundreds or even thousands of miles away from the courthouse and their attorney.

"When I was there, the technology wasn't cutting-edge, Netflix technology," said retired immigration Judge Paul Wickham Schmidt. "These are TV cameras that the images are blurry, the lines break down, the sound sometimes is uncoordinated with the video, the picture freezes up."

A broad range of government agencies such as the Social Security Administration, the Department of Veterans Affairs and the Department of Health and Human Services use video teleconferencing, or VTC for short. 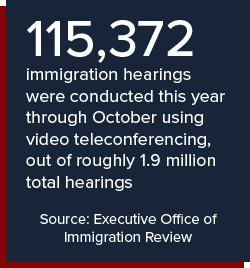 The Executive Office of Immigration Review, which adjudicates all immigration cases in the U.S. and oversees immigration courts, has been using VTC as part of hearings since the mid-2000s, according to a spokesperson for that office.

However, in March 2017, Attorney General Jeff Sessions released a memo detailing plans to "increase each facility's VTC capabilities and update existing infrastructure to aid in the ability to conduct removal proceedings."

While the statistics regarding the expansion of VTC and its impacts remain shrouded, the amount of cases completed per month has shot up 68% since that announcement from Sessions, according to the EOIR's statistical yearbook. This year, 22,963 cases have been completed each month on average, compared with 13,598 cases a month in 2017, according to EOIR data.

Through October, 115,372 VTC hearings were conducted out of roughly 1.9 million total hearings, according to the EOIR. Data before this year was unavailable from the office.

Under the law, immigration judges are allowed to use videoconferencing for removal proceedings to the same extent that they would use any in-person hearings, according to the spokesperson.

"EOIR routinely uses VTC equipment to improve the efficiency of the immigration court process and to more effectively manage its resources," the spokesperson said.

Schmidt said that while there might be some efficiency for the government in using VTC, there are downsides compared to in-person hearings. According to the EOIR, through October 891 hearings were adjourned due to some kind of video malfunction.

"The video connections usually aren't very good. So it's a stressful hearing," Schmidt said, noting that the hearings he conducted felt as if they were done in a beat-the-clock manner because the video or audio connection was somewhat unreliable.

"This isn't even Judge Judy," said Schmidt, who served at the U.S. Immigration Court in Arlington, Virginia.

It definitely makes it feel extremely unfair and biased in how they are allowed to present themselves. 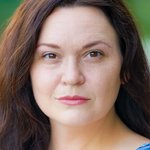 Immigrants can also find themselves unable to have side conversations with counsel, who sometimes appear over the phone, while also having to navigate dealing with an interpreter and a judge simultaneously speaking through an audio feed, adding multiple obstacles to the communication process.

All the while, immigrants are trying to make their cases in prison style jumpsuits through a medium that's just more impersonal than an in-person proceeding, advocates say.

"It definitely makes it feel extremely unfair and biased in how they are allowed to present themselves," said Sarah Owings, vice chair of the American Immigration Lawyers Association's EOIR committee.

Such challenges were on display during recent hearings at the Varick Street Immigration Court.

For example, the judge asked one attorney who had to dial in to the hearing if he had been able to confer with his client first. The answer was no, and the reason given was that he simply couldn't track her down. The attorney, Andrew Downey, said he was under the impression that his client was being held at the Karnes County Residential Center in Texas.

But when he tried to reach her there, he was informed that she had been transferred to the Adams County Correctional Center in Mississippi, where the hearing was broadcast from.

Downey told the court that he never was able to connect with his client at the correctional center.

The Varick Street facility began using VTC after protests last year over the Trump administration's family separation policy halted the court's operations. The move prompted a lawsuit in February from a group of immigrant detainees who wanted to block the use of videoconferencing in their removal hearings, saying VTC improperly hampered their access to evidence, counsel and interpreter services.

And while a federal judge in June found the court didn't have jurisdiction over the dispute, he also noted that the implementation of the hearings was "plagued by numerous technological and scheduling challenges."

For its part, the EOIR has suggested the benefits of the technology outweigh the drawbacks.

"VTC creates greater flexibility in docket management by enabling non-local judges to assist with hearing cases," the EOIR spokesperson told Law360. "Whether the hearing is conducted in-person or by VTC, immigration judges review all cases on a case-by-case basis, taking into consideration every factor allowable by law."

Todd Bensman, a senior national security fellow with the conservative Center for Immigration Studies, contended that since video teleconferencing has been in use for years and only recently expanded, criticism over the technology seems to be politically driven, adding that communication flaws are going to pop up here and there due to the backlog of cases.

At the end of the day, the hearings allow judges to cover more ground, Bensman said.

If all of a sudden there are all these due process complaints, I would question that as sort of grandstanding — trying to make a Trumpian issue out of something. 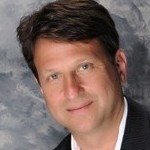 "If all of a sudden there are all these due process complaints, I would question that as sort of grandstanding — trying to make a Trumpian issue out of something." Bensman said.

While recent statistics might seem to suggest that VTC has helped tackle the backlog of immigration cases, there are other factors that have likely contributed to the jump in completed cases, according to Sarah Deri Oshiro, managing director of the immigration practice at the Bronx Defenders, which was a plaintiff in the lawsuit over the Varick Street hearings, and New York Immigrant Family Unity Project attorney Sophia Gurulé. Both attorneys were involved in the litigation.

That includes performance quotas for judges requiring them to process more cases each year and a memo sent to the entire EOIR saying courtrooms couldn't go unused during business hours, they said.

When it comes to the downsides of video teleconferencing, children are especially vulnerable, according to critics. The technology amplifies the challenges that young people already face as part of in-person hearings, they say.

Because children are still in various stages of development, it is hard for them to comprehend what is going on during the hearings, especially when the hearing is conducted through videoconferencing, according to Miriam Abaya, an associate at the Young Center for Immigrant Children's Rights.

So far, there has been a dearth of legislative action to bring consistency to the hearings, according to immigrant advocates.

The lack of oversight, and in turn accountability, might make future legal challenges along the lines of the New York case especially important, they say.

"If it isn't reined in, I think it's going to allow for a lot of room for error," Owings said. "I think that we will have people who do not get full and fair hearings in removal proceedings."