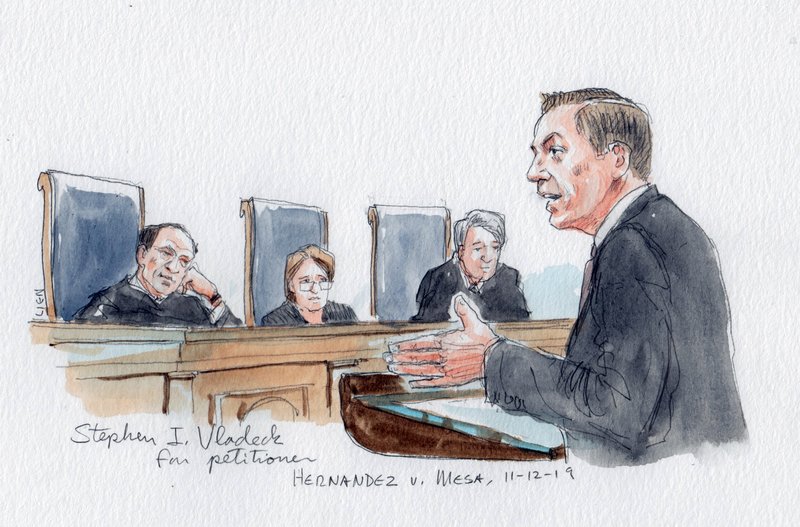 Stephen Vladeck, an attorney for the parents of a teen killed by a border agent, argued before the U.S. Supreme Court on Tuesday that the family should be able to collect money damages. (Art Lien, courtartist.com)

The U.S. Supreme Court's skepticism aimed at a 15-year-old Mexican boy's parents suing an American border agent for their son's death could result in a ruling that restricts individuals' ability to sue federal officers for violating their constitutional rights.

The lawsuit from the parents, Jesus C. Hernández and Maria G. Güereca Bentacour, rests on whether they can rely on a nearly 50-year-old decision from the Supreme Court to seek damages after U.S. Border Patrol agent Jesus Mesa Jr. fatally shot their son along the southwest border.

allows people to collect money damages if their constitutional rights have been violated by a federal officer and no alternative legal remedy exists. Since 1971, however, justices have consistently rejected Bivens claims across a variety of circumstances except on two occasions, the last of which came nearly four decades ago.

During oral arguments in the parents' case on Tuesday, justices once again appeared reluctant to expand the application of Bivens, and their hesitancy could deal a final blow to anybody attempting to hold federal officers accountable for constitutional violations, according to Gregory Sisk, Laghi distinguished chair in law at the University of St. Thomas School of Law.

"Everyone has understood that the Bivens remedy has been disfavored now for at least a couple of decades, but no one has put the last nail in the coffin of Bivens," Sisk said in an interview with Law360.

"If the court says no here, the message that will be taken away is that this is not just a case about a cross-border shooting. This is a case about the Bivens remedy having any application other than in the three narrow contexts in which it was recognized 40 years ago," he said.

The two cases in which Bivens was previously applied, according to the American Immigration Council, are Davis v. Passman from 1979, which concerned a congressman firing an assistant based on her gender in violation of the Fifth Amendment, and Carlson v. Green from 1980, which pertained to prison officials failing to give an inmate adequate medical care in violation of the Eighth Amendment.

Josh Blackman, a constitutional law professor at the South Texas College of Law Houston and an adjunct scholar at the Cato Institute, said that the case itself is less significant than the bigger question of whether the Supreme Court will put a stop to any further damage awards against federal officials.

"It's not whether Mesa wins," Blackman said. "He probably wins; it's how he wins that's important."

"If the court goes more broad and says no more Bivens remedies anywhere, that means people who are injured by federal officials may not be able to get any sort of remedy," he said.

The parents' case stretches back to 2010, when Mesa fatally shot their son Sergio Adrián Hernández Güereca, whom the parents say was unarmed and playing with friends around the border between Juarez, Mexico, and El Paso, Texas. They sued Mesa in Texas federal court, which tossed the suit, and the full Fifth Circuit later upheld that dismissal, ruling that Mesa was shielded from civil liability.

The high court reversed that holding in 2017, reasoning that Mesa couldn't have known at the time of the shooting that the boy was a Mexican citizen lacking in substantial connections to the U.S. This decision, however, was not enough for the Fifth Circuit to apply the Bivens remedy on remand.

Now, during the parents' second go-round in the high court, the justices questioned their attorney, Stephen Vladeck, about where the court should draw the line to ward off a flood of lawsuits having to do with overseas injuries.

"We have a foreign national injured abroad by an action in the United States. I can think of a lot of cases that that's going to encompass, right? And not just cross-border shootings but all kinds of torts that can occur transnationally," Justice Neil Gorsuch said.

ACLU and Sisk also filed separate briefs in support of the parents.

"We'd be leaving the remedy solely in the government's hands to police themselves," Gelernt said. "The need for a civil remedy for the families is absolutely critical."

Gelernt also represented the mother of a 16-year-old Mexican teen who was similarly slain in a 2012 cross-border shooting incident involving a different border agent. In that case, the Ninth Circuit reached a different conclusion, finding that the agent wasn't immune to liability, and allowed the mother to move forward with her damages claim.

Former U.S. Customs and Border Protection officials have also backed the parents, saying in an August brief that because of increased militarization and inadequate screening and training at the agency, similar incidents are likely to continue happening if agents can't be held accountable in civil suits.

César Cuauhtémoc García Hernández, an immigration law professor at the University of Denver Sturm College of Law, said that the Supreme Court's involvement has the possibility of sending a strong message to the federal government and border agents that impermissible violence has consequences, even if the person being shot at is on the southern side of the border.

However, President Donald Trump's rhetoric "emanates in the field through the individual actions of Border Patrol agents," and a decision in Mesa's favor will send a message to border communities that the U.S. Border Patrol can operate as a police force under few limits, García Hernández said.

Gelernt also said that the stakes are higher under Trump with the administration treating the border like a military zone and referring to CBP as a paramilitary unit.

"When that message gets sent, I think we're going to see more and more abuse if there can be no damage actions brought," he said.