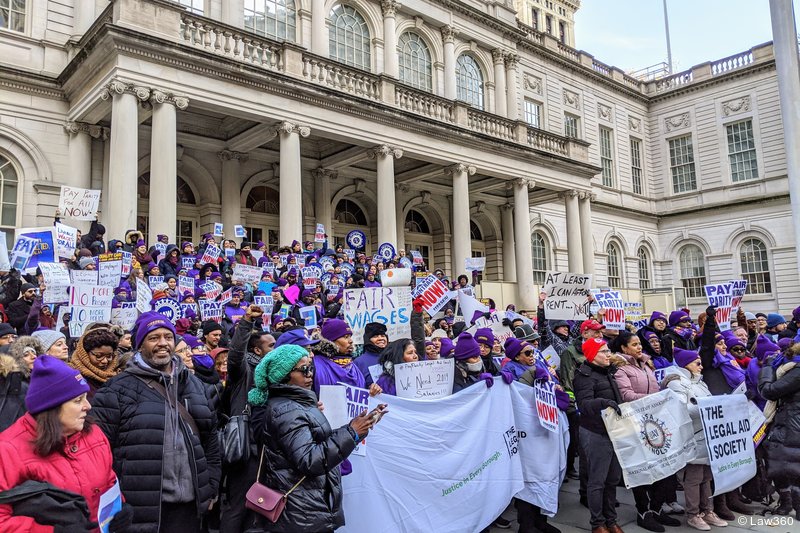 
For 13 years, Aishah Bruno has performed many of the same duties that lawyers do. Yet as a paralegal case handler for the Legal Aid Society, she and others in her position earn only a fraction of their attorney counterparts.

Bruno regularly serves as the legal representative for low-income workers who need to attend unemployment or other work-related hearings. She loves helping others as part of her job, but worries that she is one crisis away from needing help herself, and possibly ending up in a shelter with her 9-year-old son.

"I never would have imagined that some of our members, including myself, could be a paycheck away from needing government benefits ourselves," said Bruno, referring to her union, Service Employees International Union, Local 1199.

Approximately two-thirds of unionized so-called nonattorney advocates in New York City such as Bruno need to find second jobs simply to make ends meet, according to the Association of Legal Aid Attorneys, which organized a rally on Wednesday on the steps of City Hall to draw attention to the pay disparity issue.

The unions, which also include the Legal Services Staff Association, want New York City to boost pay for the advocates, just as the city has pledged to do for some unionized attorneys who work for nonprofits with city contracts.

The nonattorney advocates spend their days in full-time jobs where they may be the only person who counsels individuals who are facing crises in their lives and cannot afford legal representation, said Jared Trujillo, president of the Association of Legal Aid Attorneys. Yet by night or on the weekends, the nonattorney advocates morph into Uber drivers, food deliverers or other types of service workers, he said. 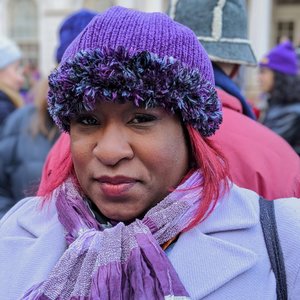 Aishah Bruno has worked for 13 years as a paralegal with the Legal Aid Society in New York. (Kevin Penton | Law360)

"The workers who represent the most vulnerable in our city deserve equitable pay," Trujillo said.

The issue is currently at the forefront as the New York City Council weighs making modifications this month to the 2019 budget, with groundwork for the 2020 budget already underway.

City officials, including Mayor Bill de Blasio, have publicly committed to boosting pay for unionized attorneys who work for nonprofit organizations under contract with the city. Those attorneys include public defenders on criminal cases and lawyers who provide civil legal services, Trujillo said.

"The council said this was a priority. I said back to them, it's a priority for me too," de Blasio said during a June interview, according to a transcript posted on the city's website.

"And when we finally figure out what makes sense to do and what the timing will be, what the dollar figures will be, we will put it into the budget and we'll find the money either if we're blessed enough to have some more revenue or if we don't we're going to have to find it from savings — but we will find it," de Blasio said.

New York's commitment is limited to bringing pay for those nonprofit attorneys in line with salaries earned by lawyers with the city Law Department, Trujillo said. Yet that would only be for approximately their first five years of pay, and would be phased in over the next four years, he said. There's been no pledge to boost nonattorneys' pay. 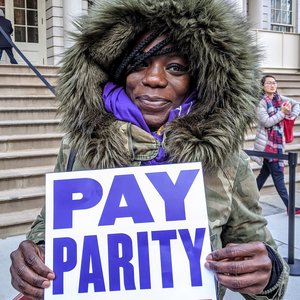 Camille Gray has worked for three years as a paralegal with the Legal Aid Society in New York. (Kevin Penton | Law360)

According to testimony at an October 2018 City Council meeting, the corporation counsel attorneys in the Law Department who represent the city, mayor and other elected officials start off earning at least $68,000, the ceiling for a beginner public defender.

At the five-year mark, the most a public defender can make is $78,000, while the floor for Law Department attorneys with the same experience is $79,000, said Tina Luongo, Legal Aid's top criminal defender. After 10 years, public defenders earn about $90,000, while their city counterparts are paid an average of $108,000.

Meanwhile, some nonattorney advocates in the city have gone seven of the last 11 contract years without a raise, according to the Association of Legal Aid Attorneys. The unions on Wednesday advocated for rectifying the pay disparity issue for the advocates as part of the current budget. Paralegals can earn between approximately $46,000 and $55,000 after five years, depending on where they work, Trujillo said.

Officials with the City Council and de Blasio's office could not be reached for comment.

Camille Gray, a paralegal who has worked with the Legal Aid Society for the past three years, said that while she enjoys helping those in most need of legal assistance, making ends meet in New York is not easy. A member of the organization's homicide unit, Gray said she hopes the city can find a way to pay nonattorney advocates an equitable wage.

Margaret Cardenas, a paralegal with the New York Legal Assistance Group since April, told Law360 that in addition to her full-time job helping people enroll in Medicare and Medicaid, she provides child care for several kids and develops music that stores use as their background soundtracks.

Given her own challenging financial situation, Cardenas said she ends up relating to the low-income individuals she aids as a paralegal.

"Right now, it's really hard to make ends meet," Cardenas said. "It would be nice to be paid a living wage, to be able to afford to pay for more than food."