The evidence that would eventually clear Jack Sagin of a murder conviction came to light in 2009, but it took an intense, decadelong legal battle and the pro bono help of Shearman & Sterling LLP before he was able to walk out of prison. 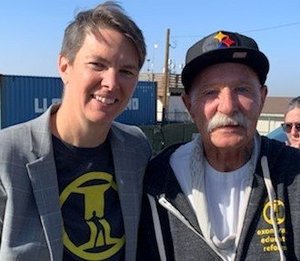 Sagin, 74, was released from prison in October three decades after his murder conviction, which DNA evidence convinced a court to overturn. The fight over that evidence covered three appeals and more than 4,000 hours of pro bono work by Shearman & Sterling attorneys, along with work by lawyers at nonprofit organization, the Northern California Innocence Project.

"As I told the judge the day they sentenced me, I told him, 'You made a big mistake here.' From that time on, I just continuously, continuously tried to prove my innocence," Sagin told Law360. "Thank god lawyers took on my case who believed in me ... they believed in me and they kept it going."

The reversal was a dramatic turn of events for Sagin after a jury in 1986 found him guilty of murdering 40-year-old Paula Durocher, who was found stabbed to death in her Monterey, California, apartment the previous year. The evidence that had been used to convict Sagin was based on the testimony of a jailhouse informant.

Sagin's path to freedom began in earnest in 2009, when he won the right to conduct post-conviction DNA testing. That testing determined that, despite the victim's murder by multiple stab wounds during a violent struggle, none of the DNA found at the grisly crime scene matched Sagin's, including DNA found under the victim's fingernails.

"At that point I was fully convinced of his innocence and was thrilled to continue to push it forward," said Shearman & Sterling counsel Emily Griffen, who has been working on the case for the last eight years.

But that DNA evidence and the attorneys' confidence in his innocence, along with changing views on the reliability of jailhouse informants, was not enough to secure Sagin's release from prison a decade ago.

"In some of these cases, once the DNA evidence comes back the state will decide not to pursue it any more and essentially let the person go," Griffen said. "There were points along the way where we thought that probably should have happened, but it never did."

When the Shearman & Sterling and NCIP team filed a habeas petition in 2012 based on the new evidence, the Monterey Superior Court denied the petition two years later. After the team filed an appeal of that decision, the state's Court of Appeal ordered the trial court to show cause why Sagin was not entitled to relief. But, again, the trial level court responded with a denial.

The team of attorneys appealed a second time to the higher court, which again demanded the lower court explain why the new evidence failed to justify Sagin's release and ordered the court to hold an evidentiary hearing. This time, the team of lawyers was confident that they would win.

In 2016, the state of California had passed legislation that lowered the standard for determining whether a habeas petition should be granted, from requiring appellants essentially prove their actual innocence beyond a shadow of a doubt to instead prove that had a jury heard the newly discovered evidence, it is more likely than not that there would have been a different outcome at trial.

The evidentiary hearing on Sagin's case was held in 2017 following the passage of that legislation, but the Superior Court again refused to overturn the conviction.

Finally, after a third appeal, the Court of Appeal in August vacated the trial court's judgment, finding that had the jury been presented with the same evidence in 1986, it more likely than not would have failed to convict the defendant. The decision meant Sagin was a free man.

Griffen said she is thrilled with the outcome but frustrated by the long journey that was needed to achieve that goal.

"We felt the county and state didn't take a close enough look at this case and re-examine it in light of the new [DNA] evidence, which meant [Sagin] was in jail for another 10 years," Griffen said. "It's very frustrating to me that he lost so much of his life to things that could have been done differently."