For Curtis Flowers, A Long Road To Bail 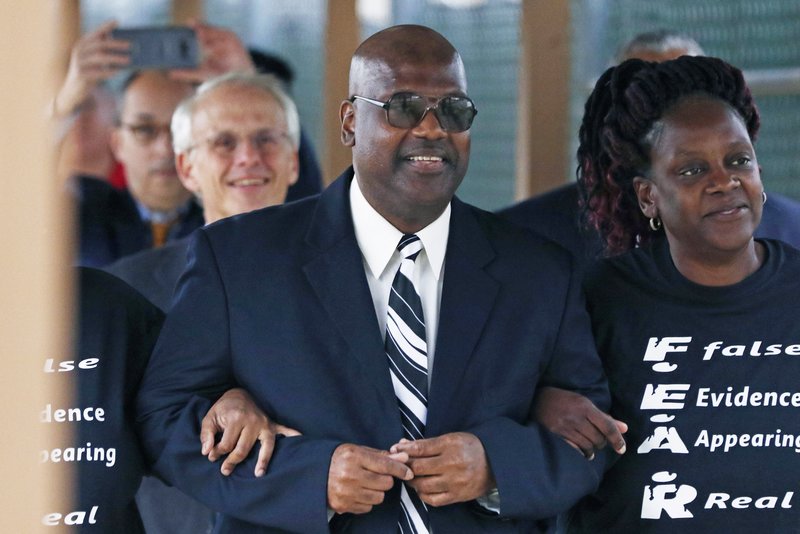 Curtis Flowers left the Winston County jail last month, after nearly 23 years of incarceration. He's been tried six times for the same crime. Though he's been released on bail, he faces a possible seventh trial. (AP)


For 23 years, Curtis Flowers has insisted he wasn't the one who shot four people execution-style at the Tardy Furniture store in Winona, Mississippi. Yet he sat in prison as his case went to trial six times.

Last month, he was released on bail after two mistrials and four successful appeals — the most recent one granted in June by the U.S. Supreme Court, which found Flowers' prosecutor demonstrated a "relentless, determined effort to rid the jury of black individuals."

It's still unclear whether Flowers will be prosecuted a seventh time. He's sought to dismiss the case, saying in a pending motion to dismiss that his half-dozen trials were "a study in the tactics and circumstances typifying oppressive prosecutorial misconduct." Amid the ongoing uncertainty about Flowers' fate, Law360 offers a look at how we got here.

Hours later, Curtis Flowers emerged as a suspect. He'd stopped working at Tardy Furniture about two weeks before and owed the store a $30 advance on his paycheck. He was arrested the following January.

Cornell law professor Sheri Lynn Johnson, who later represented Flowers before the Supreme Court, said as far as motives go, losing the job was a weak one. Flowers himself hadn't shown up to work for a few days, and he'd been replaced by the time he called to see if he still had a job.

"He was fired from a minimum-wage job that he'd held for three or four days," she said. "It was a crazy reason to focus attention on him."

Local prosecutor Doug Evans sought the death penalty for Flowers, limiting the first trial to only the robbery and Bertha Tardy's murder.

At trial, two of Flowers' former cellmates testified he'd confessed to them in jail. Both would later recant. Though the murder weapon was never found, casings matched a gun that had been stolen out of Flowers' uncle's car. Gunshot residue was found on Flowers' fingers, but he insisted he'd fixed his truck battery and set off fireworks in the days leading up to the murder, and that could have triggered a false positive.

A jury sentenced Flowers to death for Tardy's murder.

There were problems with that first trial, Flowers pointed out in his appeal. Though only Tardy's murder was at issue in the trial, Evans repeatedly referenced the other victims. He also questioned witnesses' credibility, even when he didn't have a factual basis to do so.

For example, Flowers had been interviewed twice by police — once the day of the murder, and again two days later. There was no recording or transcript of the first interview, and the second one was recorded. Neither was in evidence, and Evans conflated the two interviews to suggest Flowers had changed his story the day of the interview.

And Flowers, who is black, was tried by an all-white jury, after Evans used peremptory strikes to eliminate all five African American prospective jurors from the pool. Flowers fought the dismissals, citing the U.S. Supreme Court's Batson v. Kentucky

decision, which forbids prosecutors from striking jurors on the basis of race. But the trial judge rejected the Batson challenge.

But the Mississippi Supreme Court sided with Flowers on appeal. Finding 19 violations of Flowers' right to a fair trial, the justices overturned the verdict and remanded the case for a new trial.

Flowers' second trial concerned the murder of Bobo Stewart, a 16-year-old delivery worker at Tardy Furniture. Again, the prosecutor moved to strike all African Americans from the jury pool. This time, the judge found Evans discriminated during jury selection, and sat one black juror.

Again, Flowers was convicted and sentenced to death, and again, he appealed and won, with the state's high court finding evidence of prosecutorial misconduct and that improper evidence was admitted at trial.

Flowers' third trial in 2004 was the first time he was prosecuted for all four murders at once — his first two trials had each focused on one victim. He was again convicted and sentenced to death. Three years later, that verdict was overturned by the Mississippi Supreme Court, which found Evans had again discriminated against black potential jurors during jury selection. Evans had used all 15 of his peremptory strikes against African Americans, leaving only one black juror.

A 2007 trial involved the most diverse jury Flowers ever faced. Though Evans again used all his peremptory strikes to remove 11 African Americans from hearing the quadruple murder case, the pool was too diverse to sit a mostly white jury. The jury, which consisted of seven white and five black jurors, couldn't reach a verdict, resulting in a mistrial.

"I don't think that's a coincidence at all," Johnson said. "It was a racially polarized case from the beginning."

One year later, Flowers was tried for all four murders yet again, this time before nine white jurors and three black jurors. That case also ended in deadlock.

"That's one of the reasons why we look for racial diversity on juries," according to Sam Gross, senior editor of the National Registry of Exonerations. He said the credibility of testimony from "jailhouse snitches" — who may have something to gain by cooperating with prosecutors — could be interpreted differently depending on an individual juror's background or experience.

"That is specifically one of the reasons why it's important to have people who are not homogeneous, don't come from the same segment of society, aren't all of the same race," he said.

For Flowers' sixth trial in June 2010, Evans used five of his six peremptory strikes against black potential jurors, yielding a jury with only one African American. Flowers again challenged the strikes, noting Evans asked far more questions of black potential jurors than white ones, but the trial court was persuaded by Evans' race-neutral explanations.

So was a divided Mississippi Supreme Court, which in November 2014 found "no evidence of discrimination based on the number of questions asked alone."

That case, decided a month earlier, had overturned a guilty verdict after the defendant got a hold of the prosecutor's notes showing racial motivations for dismissing black potential jurors. Chief Justice John Roberts wrote that "two peremptory strikes on the basis of race are two more than the Constitution allows."

The justices gave the Mississippi Supreme Court no guidance as to how Foster was relevant to Flowers' case, but Johnson says the Foster decision instructed judges to "consider all of the facts."

What is important about the ruling, Johnson said, is that it makes explicit how thoroughly Batson should be applied.

"[Justice Kavanaugh] says the trial court did not give sufficient weight to history," she said. "He says the history of the prosecuting office is relevant. That's not just what Evans did himself, but a prosecutor may have his own history or an office may have its own history."

The decision could have a wider effect on criminal trials, Gross said, because Flowers' case is "unusual and very conspicuous but not unique."

"In some places in the country, there are prosecutors who are as blatant in excluding black jurors from cases as Mr. Evans was," he said.

Last month, Montgomery County Circuit Judge Joey Loper granted Flowers' request for bail, noting that many of the prosecution's witnesses have recanted their testimony and "the state has failed to convince this court that the proof of Mr. Flowers' guilt is evident or the presumption great so as to deny bail." He set a $250,000 bond that was posted by an anonymous donor. Flowers was released in time to spend Christmas with his family.

Judge Loper expressed his frustration that Evans didn't show up to the bail hearing, sending Assistant District Attorney Adam Hopper to argue in his stead. Still pending are Flowers' motion to dismiss the case, and to remove Evans from prosecuting it. Evans has yet to file a response to either motion.

The judge also questioned the strength of the case. A key witness has recanted testimony that Flowers confessed to the murders in jail, the judge said, and a seventh trial would consist of "wholly a circumstantial evidence case."

The Mississippi Attorney General's Office, which represented the state at the U.S. Supreme Court, declined to comment for this story. Evans could not be reached for comment.