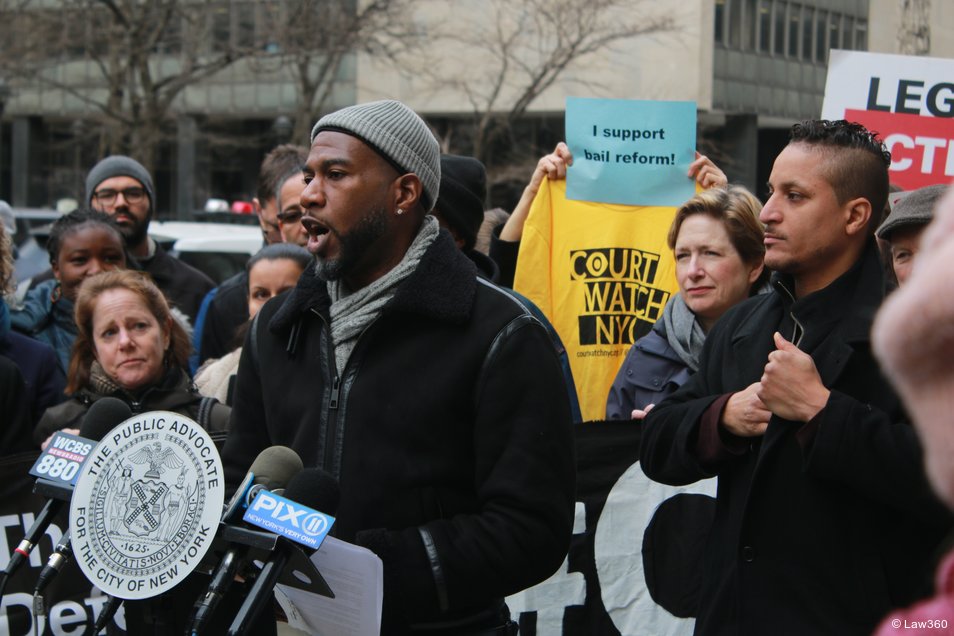 
Their goal? To document the reform's real-time effects.

Known as Court Watch NYC, the group is one of the country's most prominent examples of how citizen-led courtroom monitoring has become an increasingly useful tool in the access to justice field.

Jumaane Williams, who holds the city's public advocate post and is first in line to succeed the mayor, told reporters outside a Manhattan courthouse last week that Court Watch NYC's mission is a vital one.

"Today we are at the courthouse to ensure the new laws are being observed and followed in the courtroom," Williams said at the Jan. 7 press conference. "And it's important to verify that the laws are being acted out in good faith, because people are spreading myths and misinformation about these reforms."

The group, which has trained over 1,000 volunteers to watch and document criminal arraignments, aims to impact New York's justice system by publishing reports on prosecutorial bail practices in Brooklyn and Manhattan. In October 2018, Court Watch NYC detailed how prosecutors requested bail in 67% of observed drug cases involving people of color, while only doing so for 32% of drug cases involving white defendants.

Data like that helped convince New York lawmakers to pass this year's reform, which is expected to drastically increase the number of people released pretrial, as opposed to incarcerated due to an inability to afford bail.

Their work has been instrumental in unearthing illegal prosecutorial practices, examining the impact of other cities' bail reforms and studying police practices, as well as civil justice concerns like the lack of representation in child support disputes.

"The face of criminal justice has changed, the dialogue around reform has changed," she said. "There are people that want to be in the limelight, and then there's a whole lot of people who really want to be behind the scenes ... and that's what court watching allows for."


The law, passed in April with bipartisan support, is intended to level the playing field between wealthy defendants, who can afford pre-trial freedom by paying cash bail, and poorer defendants, who often languish behind bars for months or even years. As of January 1, most misdemeanor, non-violent crimes are no longer bail eligible — meaning one's ability to pay is no longer the determining factor for pre-trial incarceration.

Since its January 1 rollout, however, several defendants released pre-trial have committed additional crimes, leading some politicians and commentators to blame the new law. Its proponents, on the other hand, have pointed out that bail was never supposed to be a crime prevention measure, but rather a means to ensure one's return to court.

For Court Watch NYC, the dispute offers an opportunity to monitor whether judges and prosecutors -- some of whom have vocally opposed the reform -- comply with the spirit of the law. Volunteers plan to track how often judges impose additional conditions on those released without bail, as well as whether prosecutors appear to be "up-charging" defendants to make them bail-eligible.

For Hilarie Ashton, a court watcher for nearly two years, the desire to observe court proceedings stems from a two-month stint on grand jury duty. She said the experience opened her eyes to the "intentional disorganization" of America's justice system while at the same time helping her realize that she could play a role in changing it. 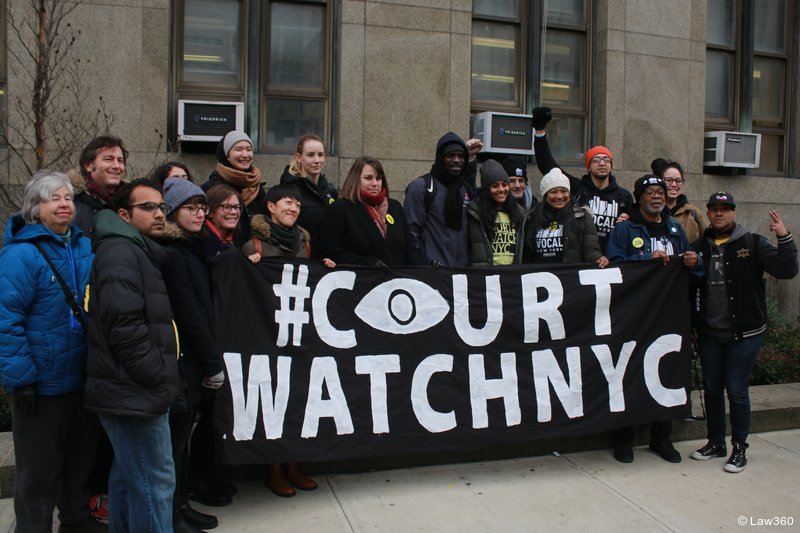 Volunteer court watchers have announced plans to monitor the first 100 days of New York's new bail reform and report on its effects and implementation. Similar groups across the country have made headlines by uncovering prosecutorial misconduct, judicial corruption and more. (RJ Vogt | Law360)


"It's literally a right you have as a member of society to observe and participate and be there for the people in the community," Ashton, an English Ph.D. candidate at the City University of New York, told Law360. "This is a public space that the public doesn't know it can enter, which is why the stories are so important to tell."

Some politicians, like New York state Sen. Michael Gianaris, have proposed legislation that would require courts to conduct some of the data collection currently carried out by volunteers. Prosecutors such as Chicago's Kim Foxx have also sought to provide more access to justice system data.

Court Watch NOLA dates back to the aftermath of 2005's Hurricane Katrina, when Levine remembered "criminal court was literally being held in the bus depot."

The group's initial focus on collecting data about timeliness subsequently grew to include how often judges had sidebars with attorneys, out of the public's earshot. Over time, its scope further expanded to cover monitoring bail hearings and victims rights.

In 2016, Court Watch NOLA's efforts revealed that a local prosecutor used fake subpoenas to force alleged crime victims to meet with investigators, spawning two City Council resolutions and three civil rights lawsuits, one of which is now pending in a federal appellate court.

Although Court Watch NOLA has been described as the country's oldest court-watching organization, the tactic itself goes back decades. One 1977 research article by the National Institute of Law Enforcement and Criminal Justice noted efforts in California, Ohio, New York and more.

"Organized citizen court-watching is a relatively new phenomenon that has grown rapidly in the last 10 years," the report states. "Their accomplishments range from installing information booths in courthouse lobbies, to posting daily calendars and notices of defendants' rights outside courtroom doors."

"Court Watch NYC builds the power of everyday New Yorkers to demand transparency and accountability ... and an end to mass incarceration," the group's mission states. "By watching court proceedings, reporting what we see, and organizing around the systemic injustices that we witness, we aim to shift courtroom policies, practices and culture."

"In New York state, there is not a lot of public court data, so in cases where only two litigants and a judge are present, it's hard to know what's going on," said Amy Barasch, the organization's executive director. "So we trained volunteers, lawyers and law students to do court watching."

Kath Rogers, an attorney who started Court Watch Los Angeles, said her group focuses on infraction and misdemeanor courts, where most punishments are fines and fees; she decided to launch the group after providing pro bono representation to homeless people fighting citations and seeing how often volunteers "were the only lawyers in there."

"Sharing the actual stories of what happens in court tends to be the most helpful," she said. "If people could actually see what was going on in courtrooms, they would be shocked ... someone's economic future is decided in two or three minutes."

Court Watch NYC "Eyes on 2020" campaign has featured anecdotes and data of what's actually happened in court since the reform went into effect. Some court watchers have noted on Twitter that the changes to misdemeanors haven't changed the status quo for violent offenses — where hearings still lack consideration of a defendant's ability to pay.

The Brooklyn district attorney's office did not reply to multiple requests for comment on its efforts to make daily arraignments more transparent, especially regarding bail practices. But Danny Frost, a spokesperson for the Manhattan DA's office, told Law360 that disclosures on prosecutorial bail practices would be posted on its website "in a few weeks."

"Open courts are one of the great hallmarks of our justice system and we welcome the engagement and public accountability that court observers provide," Frost said.

As of publication, the Manhattan DA's website includes some information on how many misdemeanor bail requests were made in 2018 but lacks the sort of data points Court Watch NYC plans to collect — including how much bail is requested and demographics of the defendants. 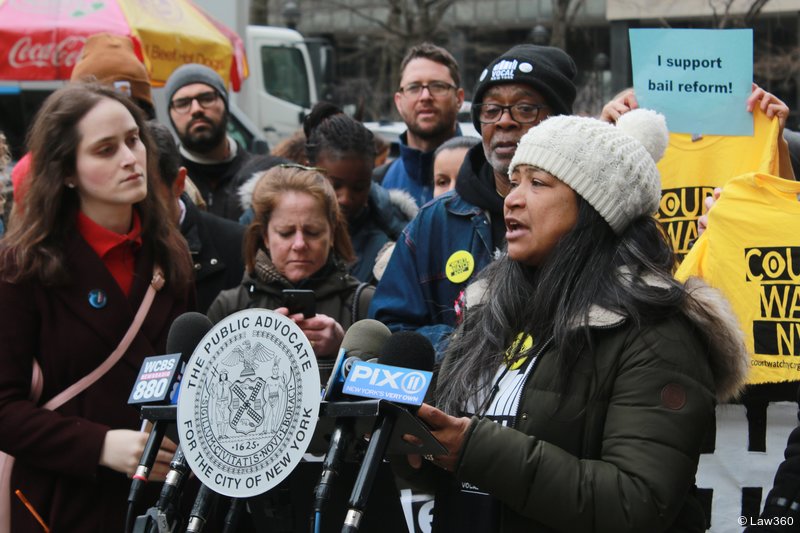 
For that level of detail, its up to court watchers like Peggy Herrera, a former school crossing guard who started volunteering after her son's emotional and behavioral issues led to repeated courtroom encounters.

Herrera has made local headlines in recent months following an arrest that stemmed from a 911 call she made in August during one of her son's breakdowns. When the police arrived, an altercation ensued that led to her spending a night in jail on charges of obstructing governmental administration.

She's since been offered a plea deal and the opportunity to pay a fine, but Herrera maintains she is an innocent victim of trumped-up charges and has challenged Melinda Katz, the newly elected Queens DA, to drop them.

Katz, for her part, has indicated appreciation for the Court Watch NYC, telling local media "the more people are engaged and participating, the better" earlier this year.

But that hasn't stopped the group from protesting her inauguration over Herrera's case as well as court watcher reports that Katz's office is still seeking bail in some cases, despite campaigning to end money bail.

Herrera told Law360 that, as a court watcher, she has observed "how many times the prosecutors used their powers to coerce pleas."

"Court watching helps hold them accountable; they know they're being watched, they have to handle cases fairly," she said.