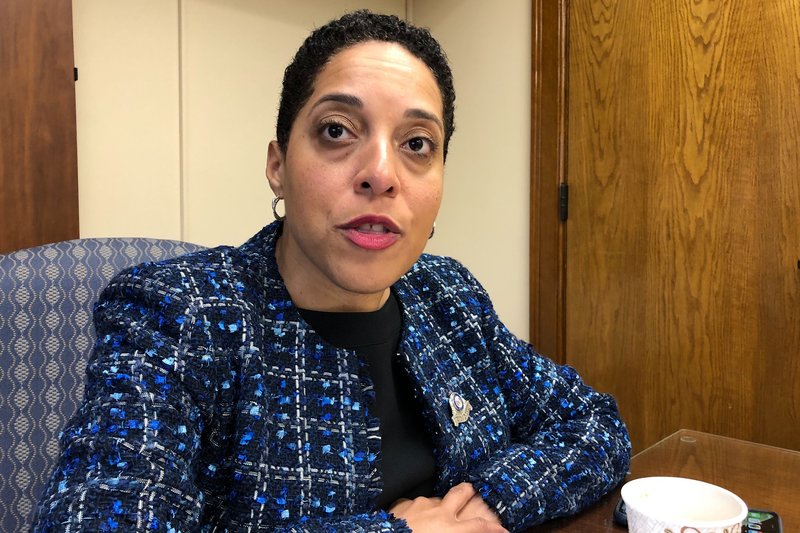 
A special prosecutor is investigating Kim Gardner, the first black person elected as St. Louis, Missouri's top state prosecutor, for her handling of an invasion of privacy case she brought and ultimately dropped against former Missouri Gov. Eric Greitens.

But according to a federal lawsuit Gardner filed earlier this month, that investigation — as well an effort to restrict her funding, a police raid on her office, and a stream of racist threats and letters — is evidence of a racially motivated conspiracy to undermine her reform agenda, which includes prosecuting police misconduct and refusing to prosecute cases from officers with documented credibility issues.

Citing the Klu Klux Klan Act of 1871, Gardner's Jan. 13 suit alleges actions by the St. Louis Police Officers Association, special prosecutor Gerard Carmody and the city itself have obstructed her efforts to "restore faith in the criminal justice system among communities of color and impose needed oversight over police violence."

Some legal experts said that while the special prosecutor's investigation has unearthed problematic conduct by one of her investigators, the fact that a special prosecutor was even appointed in the first place is a stark reminder that progressive prosecutors who are also black women routinely face scrutiny and vitriol that their white counterparts don't. 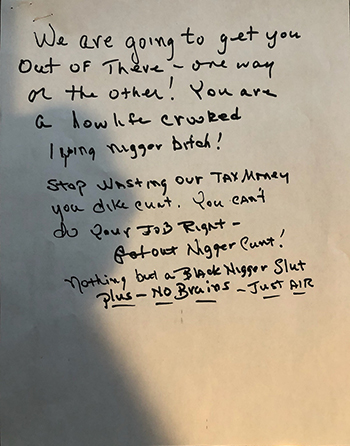 Like many other black female progressive prosecutors, Gardner's office has received numerous threatening letters, including this one, which was postmarked three days after she filed her federal suit. (Courtesy of Roy Austin)

"It's exceedingly rare for an elected prosecutor to be facing criminal investigation for acts performed as part of her responsibilities as a prosecutor," said Doug Colbert, a University of Maryland law professor who researches police misconduct. "And the search of a prosecutor's office is something that I have never seen. It's almost unheard of."

In a statement on Facebook, the police union dismissed her suit as "the last act of a desperate woman," calling it a distraction from the special prosecutor's case against an investigator she hired for the Greitens charges.

That investigator, William Don Tisaby, will stand trial in March for criminal perjury — an unprecedented case, according to Adolphus Pruitt, the president of the St. Louis National Association for the Advancement of Colored People chapter.

"No one can find any case in St. Louis City or St. Louis County where there has been a criminal indictment for lying during a deposition," Pruitt told Law360. "And he just happened to be a black man working for the first black woman prosecutor in St. Louis ... who initiated an investigation of a sitting governor."

After the grand jury used to indict Tisaby expired, Carmody issued a public statement that "the investigation into possible criminal activity will continue," a move Gardner claims was intended to "ensure that a cloud remained" over her head. He also obtained a search warrant that allowed police officers to seize all of Gardner's case files, regardless of their connection to Tisaby's deposition.

The server they seized, according to Gardner's complaint, included information regarding roughly 40 alleged police misconduct cases — 25 of them involving shootings or other forms of excessive force.

Throughout the special prosecutor investigation, St. Louis Police Officers Association spokesperson Jeff Roorda has called for Gardner to go "by force or by choice" and declared her a "criminal" for charging officers involved in police shootings. According to Gardner's complaint, police — some of whom were exposed by a watchdog group for sharing racist Facebook posts — have refused to investigate a series of racist and misogynistic letters that have been mailed to her office.

"'We are going to get you out of there one way or another,' it says, written in Sharpie," Austin said.

Black female prosecutors around the country, many of whom also face threats and unprecedented scrutiny, have rallied to her cause.

During a press conference on Jan. 14, Baltimore, Maryland prosecutor Marilyn Mosby described how photos of her children and her home address were posted online after she decided to prosecute six police officers involved in the death of a young black man. Her office has also had funding diverted elsewhere.

"These attacks are part of a national trend of a federal administration to silence and intimidate progressive prosecutors all across the country," Mosby said. "But the vitriol, the personal, and the professional attacks, particularly against black female prosecutors, is unprecedented."

Philadelphia District Attorney Larry Krasner, a white former public defender who has been a figurehead of the progressive prosecutor movement, said he, too, has faced criticism and lawsuits from police. Still, he noted that other factors come into play for Gardner, Mosby and other black women, who make up an estimated 1% of the country's elected prosecutors.

"It's obvious that a lot of black women prosecutors are facing racism and sexism," Krasner told Law360. "To the best of my knowledge, none of the other progressive prosecutors have faced the daunting proposition of police coming into their offices with warrants and seizing servers."

But not everyone agrees that the scrutiny of Gardner's office, and especially her handling of the Greitens case, is unfounded, let alone related to a racist conspiracy. The editorial board of the St. Louis Post-Dispatch called her civil rights suit an exercise in "exploiting racial divisions to explain her current legal and political predicament."

"Considering her already-substantial legal problems stemming from a special prosecutor's investigation of her office, she'll be lucky if she doesn't face professional sanction for wasting the court's time," the board wrote.

Many of those allegations stem from a special prosecutor's investigation into invasion of privacy charge she brought against Gov. Greitens in February 2018.

The charge involved an allegation that Greitens had taken a semi-nude photo of his hairdresser during an extramarital affair and stored it electronically, potentially as blackmail. To investigate the claim, Gardner hired Tisaby, an outside private investigator, in January 2018, and the two of them interviewed the woman about the alleged photo later that month.

In a deposition with Greitens' defense attorneys and Gardner, Tisaby claimed he took no notes during the interview and that there was no recording because video equipment malfunctioned. Three weeks later, however, Gardner's office turned over his notes and a videotape, saying she hadn't realized he'd taken notes or that the equipment had actually worked.

Greitens' attorneys responded with claims that she'd deliberately concealed exculpatory evidence of the hairdresser's contradicting statements, and Gardner ultimately dropped the charge in May 2018 after a judge ruled she could be forced to testify about Tisaby's conduct in the deposition. She also acknowledged that she never found proof of the alleged photo.

Greitens ended up resigning that same month in order to settle another, unrelated charge Gardner had brought over campaign finance violations. Within weeks, however, police called for a special prosecutor to investigate Tisaby's deposition testimony. That request led to the appointment of Carmody, a prominent private attorney with expertise in real estate who is a partner at Carmody Macdonald and, according to Gardner's civil rights suit, a lifelong friend of Greitens' lead attorney, Edward Dowd, who supported Gardner's opponent in the 2016 election.

Carmody, who declined to comment for this story, convened a grand jury and obtained a 30-page, six-count indictment charging Tisaby with criminal perjury. The indictment is unusually detailed and lengthy, according to Jennifer Rodgers, a lecturer-in-law at Columbia Law School and the former director of the school's Center for the Advancement of Public Integrity.

"It is a very strange indictment," said Rodgers, a former federal prosecutor. "The amount of detail and what seems to me like a very argumentative statement of the relevant facts, I think, is very unusual."

Austin noted that roughly two-thirds of the indictment's paragraphs refer to his client.

"This is supposedly William Tisaby's indictment," he added. "And a few of the paragraphs have nothing to do with Tisaby. It fits the idea they want to ruin Kim."

But Rodgers added that the alleged perjury doesn't reflect well on Gardner's office.

"It's certainly very serious for any elected prosecutor to put forward false evidence," she said. "If she's sitting there and her investigator is lying, and she knows he's lying, that's a problem."

As for the relationship between Dowd and Carmody, Rodgers said it is hardly a conflict of interest but could be used as evidence of bias in the federal case.

Colbert said that, at the very least, Carmody's appointment damages the appearance of impartiality.

"Having Dowd's close friend conducting the investigation against the party that charged his client with a crime — oh and his client happened to be the governor?" he said. "It has an odious odor."

In addition to the special prosecutor investigation, Gardner has also been fighting a lawsuit brought in April 2019 by retired police officer Charles Lane over her ability to use taxpayer funds to pay the lawyers she's retained in her own defense.

The city has sided with Lane in the suit, resulting in a temporary restraining order that blocks Gardner from using her office's funds to pay fees until after a final disposition of the special prosecutor's investigation. Austin said Gardner's legal bills "are just piling up."

By filing a federal complaint, Colbert said Gardner is taking advantage of courts that have historically served an important role when local institutions fail to provide equal justice under the law.

"In many ways, it's almost as though Gardner is sending out an SOS," he said.