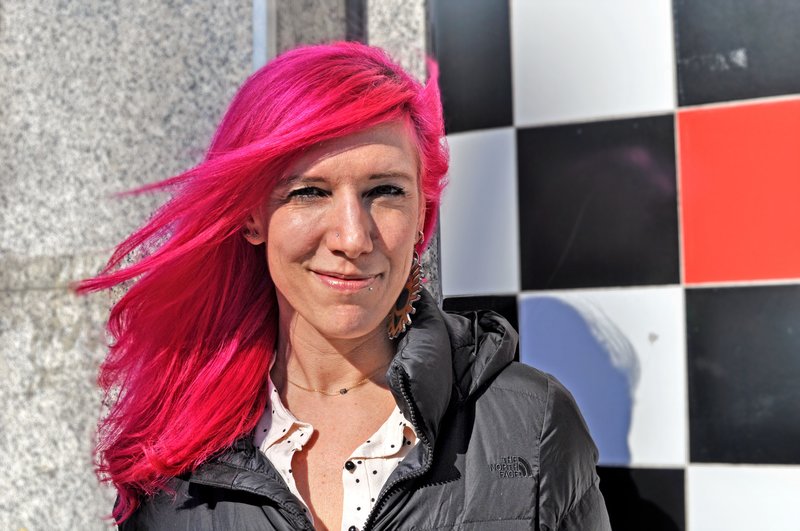 Spring Chenoa Cooper, a public health professor at the City University of New York, became the first person to file a claim using the city's new law criminalizing nonconsensual pornography. She says trying to get her pictures taken down and navigating the legal system has been "a nightmare." (Kevin Penton | Law360)


In 2018, Spring Chenoa Cooper started writing down street addresses and subway routes on slips of paper, and friends she'd made plans with knew she couldn't warn them if she was running late.

Cooper had decided to leave her phone at home. It had become an abuse machine.

Graphic sexual photographs and videos of her had been posted online, paired with her name, email address and Facebook page. Cooper believes her ex-boyfriend was behind it; he was furious about their recent breakup. He was also the only other person who had the images, which prompted a deluge of unwanted messages.

"I've blocked so many things, I've lost track of how many hundreds or thousands of people have harassed me at this point," Cooper told Law360. "There were days I cried for six hours straight and didn't leave my room. It was constant. It was on my phone. It was all the time."

Whenever a new post went up, she felt as though she'd been "sexually assaulted at that moment," and she'd desperately seek out a computer so she could report the image to the site hosting the photo and the police. She responded to invasive messages from strangers, asking for links to what they'd seen so she could get the posts taken down.

When she went on vacation for a week, a friend took over these tasks. Once she returned, he gave her the number of an attorney. "I don't know how you handle this," he told her. "I tried to live your life for three days and I freaked out."

A recent Florida International University study estimates 1 in 12 U.S. adults who use social media have been threatened with or become the victim of nonconsensual pornography. And while the conduct is likely as old as the internet, the law is still catching up to the crime.

Szalkiewicz sued on Cooper's behalf under a New York City law criminalizing the "unlawful disclosure of an intimate image." The law, which went into effect in 2018, allows for criminal charges punishable by a year in jail and a $1,000 fine, and civil claims for damages.

These statutes vary wildly across the U.S., and a few states — Massachusetts, Wyoming, South Carolina and Mississippi — have nothing on the books. Even in states with strong statutes, cybercrimes are a low priority for local law enforcement.

As a result, victims who can afford it are turning to civil suits. And resourceful lawyers are using unusual discovery techniques and manipulating tort laws to carve out legal recourse for victims whose reputation, livelihood and safety are threatened by anonymous online posts.

Cooper, a public health professor at the City University of New York, has become an unwitting advocate, spending hours on her litigation and researching the psychological effects of cyberrape. She has a criminal and a civil case pending against her ex-boyfriend. She was the first person to sue under New York City's new law.

"It was empowering to be that person, and it was also really hard," Cooper said. "I'm very glad that I can press charges. I'm glad I can do it for people who haven't been able to."

A Game of Whack-a-Mole

Civil litigation over cyberrape is still so new that victims' attorneys are self-taught and resourceful, pulling what they can from various torts.

"As a lawyer working in this area, you almost always have to get creative," said Honza Červenka of McAllister Olivarius, who represents victims in the U.S. and the U.K.

Most attorneys' first priority is getting the images offline. That's especially urgent when the subject is identified in the post and a simple Google search of the client's name yields pornography.

Sites like Tumblr and Instagram sometimes grant takedown requests, and Google considers requests to hide inappropriate pages from search results, but those can take weeks to process.

The law has few carveouts. One protects copyright, and privacy attorneys have seized on this. If the offending video or image is a selfie, victims can assert their intellectual property rights over the work.

"It's ridiculous that you have to jam this into a copyright claim in order to get past this immunity," said Mitchell Matorin, a solo practitioner outside of Boston, who frequently asserts such claims for his clients.

But copyright leaves little recourse for images that aren't selfies. And it also creates a new problem.

In the name of transparency, Google posts copyright complaints to its Lumen website, an index of legal claims against the tech giant. It sometimes names the owner of the image and the site where it appeared. Search results for a victim's name might not yield the offending image itself, but they could dredge up the report.

Matorin's solution? Have his clients assign copyright to him.

"That way, somebody searching for their name won't find it," he said.

But even if the original post is eventually taken down or hidden, viewers can download the images and repost them in the meantime. Matorin likens this to a game of whack-a-mole.

"Once these things are out in the wild, they spread," he said. "It's a never-ending thing. You have to keep an eye out and relive the trauma over and over."

Suing individual posters can be easier legally, but it's challenging logistically. Some sites don't track IP addresses, allowing users to post anonymously. Sometimes a website is registered in a foreign country, or uses an overseas server, which makes subpoenaing tricky.

This has led to inventive ways of serving defendants.

Szalkiewicz has filed pre-action discovery motions to subpoena tech companies and determine anonymous posters' identities, though he admits "it can take a while to convince judges they're able to do this legally." He's sued email addresses, and in Cooper's case, he sued both her ex-boyfriend and online accounts with names like CALIDADDY26.

"We have to be creative, because very rarely do you know who the individual is, but you also have to get them due process," he said. 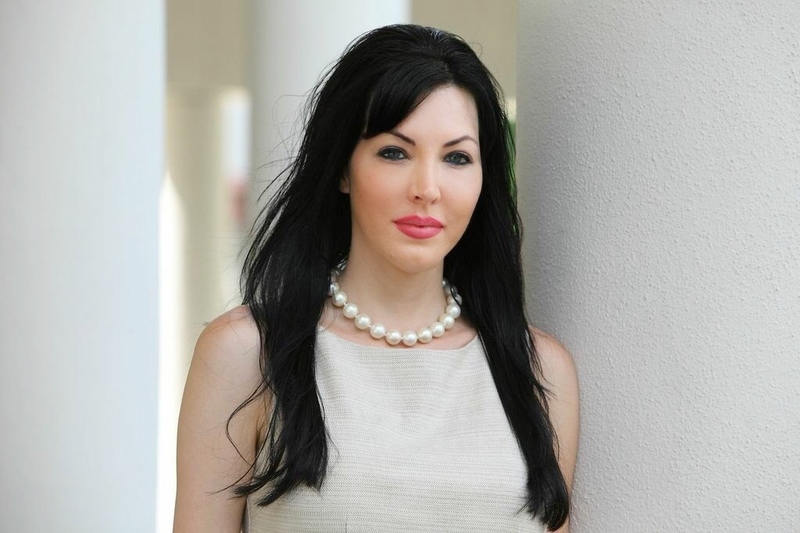 A decade ago, there were even fewer options for victims, and no state laws explicitly criminalized nonconsensual pornography.

Bekah Wells can attest to this. In 2010, when she learned her ex-boyfriend had posted nude photographs of her, law enforcement was little help. Officers "weren't as tech-savvy as you'd think," she said, and the crime was "not the top priority."

"There were no criminal statutes," she said. "I contacted law enforcement. They said, 'Nope, sorry, this doesn't qualify as harassment because it's just a one-time thing.' This really is something new in the legal landscape."

But the details of those laws vary widely. In 11 states, the offense can only be charged as a felony; in 17, it is only available as a misdemeanor. Some states, like New York, require an intent to harm the victim for the charge to stick. And not every statute has a civil cause of action, which leaves legal remedies in the hands of law enforcement.

That's why many plaintiffs attorneys, like Červenka, want to see a federal law criminalizing nonconsensual pornography and offering plaintiffs a civil cause of action. That would allow for uniformity, and would ease the jurisdictional challenges when a victim and a perpetrator live in two different states.

Bills that would have made posting nonconsensual pornography punishable with up to five years in prison were filed in 2016 by U.S. Rep. Jackie Speier, D-Calif., and in 2017 by U.S. Sen. Kamala Harris, D-Calif.

"This issue remains a top priority for me because this conduct is even more pervasive than when I first introduced this bill," Speier told Law360. "Now, more than ever, federal legislation is needed to address this insidious practice and the ineffectual patchwork of state laws that allow too many perpetrators to slip through the cracks."

The 2016 bill never made it to a vote. Speier refiled similar legislation last year, and while it hasn't moved much this session, it does seem to have gained support — her 2017 bill had 14 co-sponsors, but its current incarnation has 85. Speier remains optimistic.

"Most bills require more than one introduction," she said. "The Enough Act has strong bipartisan, bicameral support and I am confident it will be passed this Congress."

"You have to recognize the legitimate harms victims have suffered, but not curtail a lot of really powerful socially beneficial activity taking place on the internet," he said.

Goldman wonders if the problem is with the law or a lack of enforcement. State nonconsensual pornography laws already exist, he noted, and "we live in a heavily regulated society and possibly an overcriminalized one."

Laws striving to strengthen privacy rights on the internet often chip away at the Communications Decency Act, endangering "the existential basis of the services we use on a daily, hourly and even minute-by-minute basis," Goldman said.

He pointed to the passage of the federal Fight Online Sex Trafficking Act in 2018. The law amended the Communications Decency Act to nix sites' immunity in cases of sex trafficking and prostitution.

The law targeted sites like BackPage, a marketplace for sex work. But its impact was broad. A month before the bill became law, Craigslist shut down its "personals" page, perhaps the original online dating site.

Craigslist said in a post that it was "regretfully" taking the site down because the new law made its personals section too risky, "jeopardizing all our other services."

"New speech restrictions actually shrink the internet of legitimate constitutionally protected conversations," he said. "That's usually not the point or the goal, but it's the inevitable consequence."

But Matorin said the Communications Decency Act blocks his clients from filing civil claims — for infliction of emotional distress, invasion of privacy, and defamation, for example — that they would ordinarily be entitled to, even under the broad protections of the First Amendment.

"In the absence of the act, you could be sued for your speech," he said. "The free speech [advocates] forget that, and there are very real people who are devastated by this."

One of those people was Wells, who decided to become a lawyer. She calls it the "silver lining" of her frustrating experience 10 years ago.

Wells is hopeful the issue of nonconsensual pornography will one day wind its way to the U.S. Supreme Court, where universal privacy rights in the internet age could be ironed out.

As a law student, Wells said she understands the concerns about the First Amendment and overcriminalization.

"But what about the victim, what happens to her?" she said. "When you press send, she basically suffers a life sentence. There needs to be some accountability. That's the only way we're going to get it through people's heads that this causes serious trauma."