Law360, New York (March 11, 2020, 6:54 PM EDT) -- New York state courthouses by week's end will be under new restrictions limiting who may enter the courts due to the coronavirus outbreak, barring entry to anyone who has come into contact with the virus, has "flu-like symptoms" or has recently traveled to countries hit hardest by the pandemic. 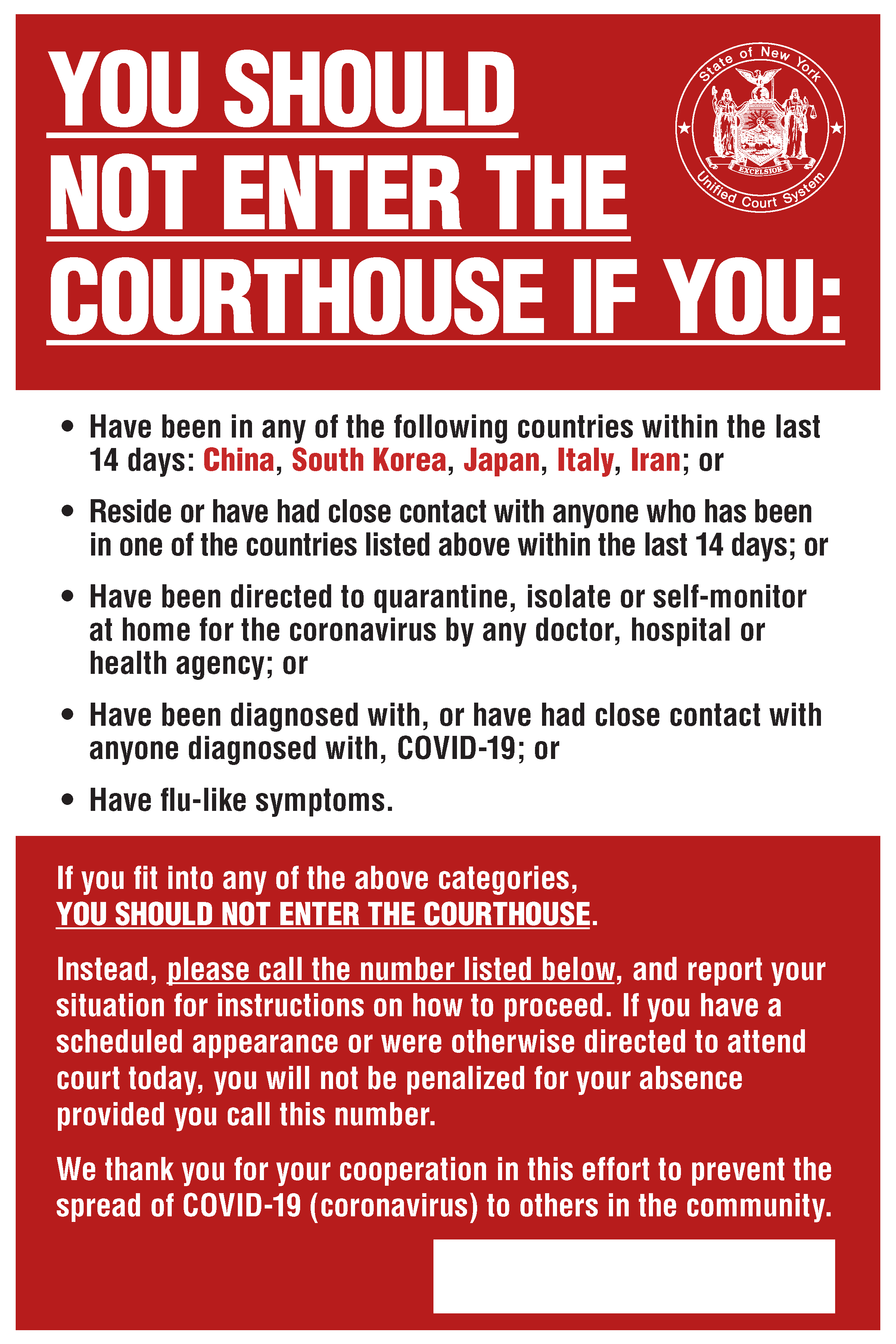 A court official said this poster will soon be posted at New York state courthouses with a location-specific phone number.


The new restrictions will go into effect "statewide in the next day or so" and mirror those announced in the city of New Rochelle in a court order Wednesday, New York State Courts spokesman Lucian Chalfen told Law360. The New Rochelle restrictions largely mirror those implemented by the Southern District and Eastern District of New York earlier this week with the additional prohibition that those with flu-like symptoms should not enter the courts.

Once enacted, the new policy will apply to 350 state-run courthouses with more than 1,500 state run courtrooms, affecting 16,000 employees of the New York state court system — not to mention the legions of attorneys who also haunt those halls.

In a written order, New York State Courts Chief Judge Janet DiFiore declared that the ban applies to anyone who has traveled to China, South Korea, Japan, Italy or Iran in the past 14 days. Also banned are people who live with or have come into close contact with anyone who has been in one of those countries during that period, people who have been asked to self-quarantine and those who have either been diagnosed with the disease — called COVID-19 — or come into contact with someone who has been diagnosed.

State officials have identified Westchester County as ground zero of New York's COVID-19 outbreak. The county accounted for 121 of 216 cases statewide, according to the state health department as of Wednesday afternoon.

On Tuesday, a female attorney tested positive for coronavirus after representing clients and appearing in the Westchester County courthouse on March 2, 3, 4 and 5, Chalfen told Law360.

Courts staff cleaned the matrimonial and family courts where she was seen on those days and have resumed operations, Chalfen said. Anyone who had an interaction with the attorney was told not to come into work, self-isolate and consult with his or her physician, he added.

In the Midwest, the Eastern District of Michigan also implemented COVID-19 restrictions in its five courthouses on Wednesday, barring "persons with fever, cough or shortness of breath" but limiting its country-specific ban to recent visitors to China, South Korea, Italy, and Iran — but omitting Japan, which has been included in New York's coronavirus courthouse restrictions.