By Jimmy Hoover
Law360 is providing free access to its coronavirus coverage to make sure all members of the legal community have accurate information in this time of uncertainty and change. Use the form below to sign up for any of our weekly newsletters. Signing up for any of our section newsletters will opt you in to the weekly Coronavirus briefing.


Law360 (March 12, 2020, 2:54 PM EDT) -- The U.S. Supreme Court will be closed to the public until further notice "out of concern for the health and safety of the public and Supreme Court employees," the court said Thursday, though the building will remain open for official business. 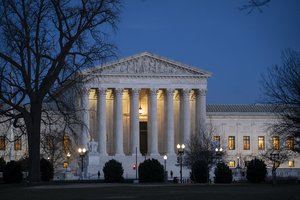 The U.S. Supreme Court building will be closed to the public as of Thursday afternoon. The court didn't comment on contingency planning for upcoming oral arguments. (AP)

The high court, which draws daily crowds of tourists and sees that traffic swell during the spring as school trips converge on Washington, said it would shut its doors to the public at 4:30 p.m. Thursday, a move that comes as courts across the country take steps to prevent the spread of the new coronavirus.

"The building will remain open for official business, and case filing deadlines are not extended under Rule 30.1," the court said in a statement on its website.

The court did not provide an update about contingency planning for a two-week oral argument session scheduled to begin on March 23. The second week of the session features a trio of closely watched cases over whether a U.S. House committee and the New York City district attorney can demand President Donald Trump's financial records from his longtime accounting firm.

The Supreme Court has a public seating capacity of about 250, not including the justices, court staff, attorneys or press. The District of Columbia government, which declared a state of emergency Wednesday, has recommended canceling or postponing mass gatherings, leading to closures of churches, concert venues, sports arenas and more.

The E. Barrett Prettyman Courthouse, which houses D.C.'s federal district and appellate courts, also said it would begin restricting access Friday to "judges, court staff, members of the media, and visitors with official business with the courts."

The oldest member of the U.S. Supreme Court, Justice Ruth Bader Ginsburg, will turn 87 on Sunday and has a history of health problems, including a cancerous nodule on her lung that she had removed in late 2018.

Gabe Roth, executive director of the watchdog group, Fix The Court, said it was "the right call" to close the building given the crowds that gather there and "the advanced age of several of the justices."

Still, he said, if the closure lasts until the next oral argument session, "the court should at a minimum permit the public to listen to a livestream of argument audio from its website."

The justices have long refused to broadcast their oral arguments by audio or video, and only very rarely releases an audio recording of the hearings the same day they take place; the court instead releases audio on Fridays, typically two days after that week's last argument.

"Live audio is the smartest way to balance the now-competing concerns of public safety and public access," Roth said.

The court's Public Information Office said it did not have any further guidance in response to a question about oral arguments.

Across the street at the U.S. Capitol, officials announced Thursday that tours and other public visits will stop until April 1. Senate leaders decided to cancel next week's planned recess to stay in Washington and work on emergency legislation. A second senator — Rick Scott, R-Fla. — announced that he would self-quarantine after contact with an infected person; Ted Cruz, R-Texas, previously isolated himself but said he has no symptoms.

Update: This article has been updated with background on the court and the virus, and with comments from Fix The Court.