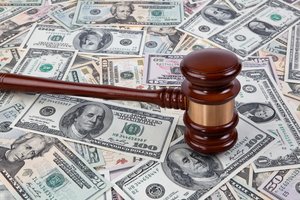 Large law firms are in good shape to weather an economic downturn thanks to more cash on hand and a strong financial close to 2019, experts say. (Getty)

Between 2012 and 2018, the nation's largest law firms increased their capital by 34%, and their excess cash, calculated by subtracting undistributed earnings and debt from cash, went up 89%, resulting in lower usage of credit lines and placing firms in a stronger position to withstand a potential recession, according to Peter Haugh, the head of Wells Fargo Private Bank's legal specialty group.

"Over the last five to 10 years firms have become less dependent on debt and have built up capital levels via input from partners. That has put them on better footing than in downturns of the past," Haugh said. "I think overall the industry is positioned quite well to weather this and come through relatively unscathed."

In addition to large law firms having more cash on hand, which often means freed-up lines of credit, firms also saw a strong financial close to 2019, with increases in inventory and demand, according to data provided by Citi Private Bank's law firm group.

Inventory consists of accounts receivable and unbilled time, which can be collected and converted to cash.

Year-end figures for 2019 showed an average 7.1% increase year-over-year in inventory across the industry and an average 8% increase among the 50 largest law firms in the U.S. by revenue that reported to Citi, the bank said.

"Law firms went into 2020 with some of the strongest inventory we've seen in a long time," the head of the group, Mehrnaz Vahid, said. "This is not Armageddon for law firms in any sense. Nothing to us is screaming default or trouble at this point."

In addition to strong year-end financials, law firms are also acting quickly to position themselves as advisers to clients facing challenges related to COVID-19 as the disease spreads throughout the U.S. and beyond, Vahid noted, with a number launching task forces dedicated to providing answers to clients' questions, and many looking to practices such as bankruptcy and restructuring that are busier in strained economies.

"Firms are trying to make sure they are very much in front of their clients, in touch, and making sure they're offering help and legal opinions," she said.

Many large law firms likely have about six months of emergency funding to weather a major slowdown in the economy or even work stoppage due to the virus, according to James Cotterman, a principal at professional services consulting firm Altman Weil.

Those emergency funds include cash reserves, a pipeline of unbilled attorney time, and bills that have gone out but have not yet been collected, Cotterman said, adding that there are also lines of credit that many law firms have from banks but have not used in recent years, which are typically equal to around 5% to 10% of their annual revenue.

"I'm glad this is happening now and not a decade ago. A decade ago law firms were in the midst of a recession and their balance sheets were just plain ugly," Cotterman said.

"Most law firms came out of the recession and cleaned up their operations and their balance sheets. I think overall, anomalies excepted, they're probably in a stronger position to weather this," he added.

In addition to lines of credit, law firms can also look to other short-term strategies to weather a downturn, such as reduced or delayed draws and distributions to partners, delays to capital expenditures, and stalling the funding of growth initiatives, according to Michael Blanchard, managing director of the law firm advisory team at risk mitigation firm Aon.

"Like any storm, the key will be the level of preparedness of firms and the existence of clear cash flow strategies to fund operations short-term," Blanchard said.

If there is a protracted period of disruption and the down economy continues longer term, it could prove to be a destabilizing situation for many firms, he said.

Those especially vulnerable, according to Blanchard, are small, midsize and regional law firms that are dependent on one or a few mid-market clients that could suffer under the financial strain of the pandemic, and those firms that have a less diverse array of practice areas.

"On the other hand, those firms with strong balance sheets and significant cash reserves might find themselves in a buyer's market for laterals and combinations," Blanchard noted.

"For most firms, the issue is not cash in the bank. The issue for most firms is, are they managing their supply of talent, which is their biggest expense, with the demand that they experienced for that talent?" Zimmermann said.