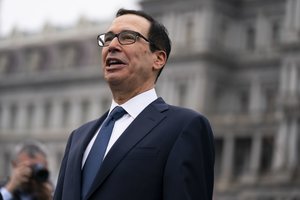 Treasury Secretary Steven Mnuchin urged Tuesday a three-month deferral on the payment of 2019 taxes, which he said would pump $300 million of liquidity into the economy. (AP)

Mnuchin met with Senate Republicans to discuss proposals to provide $1 trillion in economic stimulus to American businesses and workers. Afterward, Mnuchin said he clarified IRS rules to allow individuals and pass-through businesses owing up to $1 million in federal income taxes and corporations owing up to $10 million in taxes to defer payments for 90 days without interest and penalties.

Nevertheless, Mnuchin encouraged the public to electronically file their tax returns by April 15 and get their refunds or request extensions if they owe payments. The April 15 filing deadline remains unchanged.

At an earlier briefing at the White House on Tuesday, Mnuchin said the tax deferral, which would pump $300 million of liquidity into the economy, came at the urging of Trump.

Mnuchin's announcement came as consideration of a bill the House of Representatives passed to provide paid sick leave for workers affected by COVID-19 ran into a snag in the Senate. While Senate Democrats were willing to pass the legislation quickly, several Republican members hesitated to give their consent.

Senate Majority Leader Mitch McConnell, R-Ky., said his party has misgivings about the Families First Coronavirus Response Act, or H.R. 6201, which arrived in the Senate on Monday after the House made corrections to the bill. The legislation would provide workers with paid emergency sick leave, paid family and medical leave and establish a new employer tax credit to offset wages for displaced workers affected by the outbreak.

"A number of my members think there were considerable shortcomings in the House bill," McConnell said. "My counsel to them is to gag and vote for it anyway."

Sen. Marco Rubio, R-Fla., told reporters that some GOP lawmakers believe the House bill would provide incentives for employers to lay off their workers so they wouldn't be liable for providing those benefits.

"The concern is: What is the right way to get those people who are laid off to get assistance?" Rubio said. "Is it the unemployment system or is it through the direct payments the administration is considering?"

One proposal by the Trump administration would send $1,000 checks to all Americans.

Mnuchin said he was having discussions with Senate Republicans on whether to amend the House bill or pass it swiftly in order to quickly get relief to the American people. McConnell said he would prefer that Republicans try to fix problems with the House legislation in a coming third bill to address COVID-19's impact.

"I've decided we're going to go on and vote as soon as the Senate can get permission to vote on the bill that came over from the House, send it down to the president for signature and thus reassure the people around the country that we can operate on a bicameral, bipartisan basis quickly," McConnell told reporters.

Senate Democrats are unhappy about changes passed by the House to H.R. 6201 that were billed as technical corrections but actually narrowed the scope of the family and medical leave benefits for workers, said Sen. Debbie Stabenow, D-Mich. She added that Democrats would attempt to broaden the provisions when the Senate considers the next coronavirus bill.

"It looks like less than half the workers would be able to get paid sick leave. That's not good enough for us at all," she told Law360.

Democrats are at least making some progress in providing paid leave to workers, she added.

Democrats have their own plan to pump $750 billion into the economy. The plan, proposed by Senate Minority Leader Chuck Schumer, D-N.Y., would include affordable health care for coronavirus patients, child care funding and expanded and extended unemployment insurance.

"The Senate will not leave town until we have processed yet another bill to address this emergency," he said of the bill expected after the pending House sick leave legislation is sent to the White House.

, McConnell said that he planned to keep lawmakers focused on addressing the impact of the coronavirus.

"The goal here is to deal with this emergency created by this pandemic," he said. "Anything that doesn't address that pandemic, it seems to me, should not be considered."