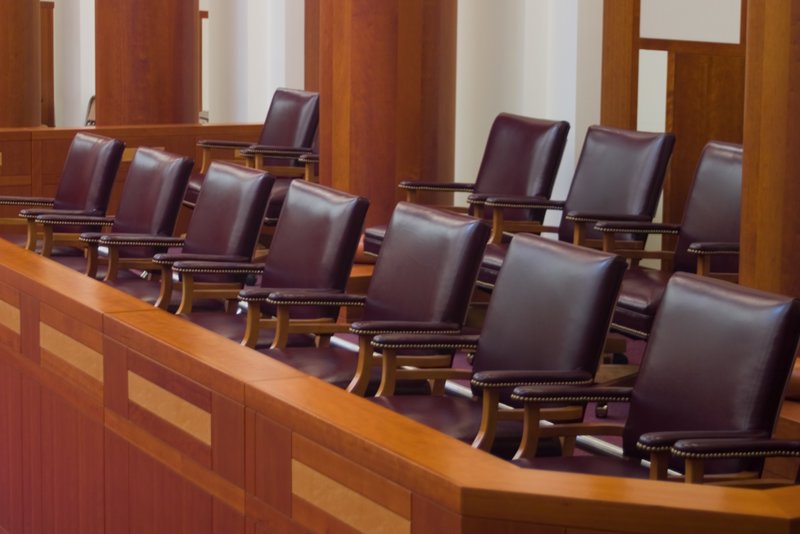 
At first, only people who had been exposed to the coronavirus or were experiencing flu-like symptoms were barred from entering Maryland's federal courthouses.

"We decided the ends of justice are served by ordering these postponements because the reasons for having those postponements outweigh the interest of the public in having a speedy trial," he said.

He also weighed another "key factor" when crafting his order: The long-term effect the delays would have on the district's caseload. It takes on average about a year to close a criminal felony case in Maryland — a wait that's nearly twice the national average. While that doesn't rise to the level of a judicial emergency, Judge Bredar said, "on the criminal side of our docket, the caseload is very heavy."

"Unquestionably when we come out the other side of this event, dockets will be very crowded and we will need to make up for lost time," he said.

Such decisions pit access to justice issues — ranging from criminal defendants' liberty interests to civil litigants' livelihoods — against public health concerns, and there are no easy answers. 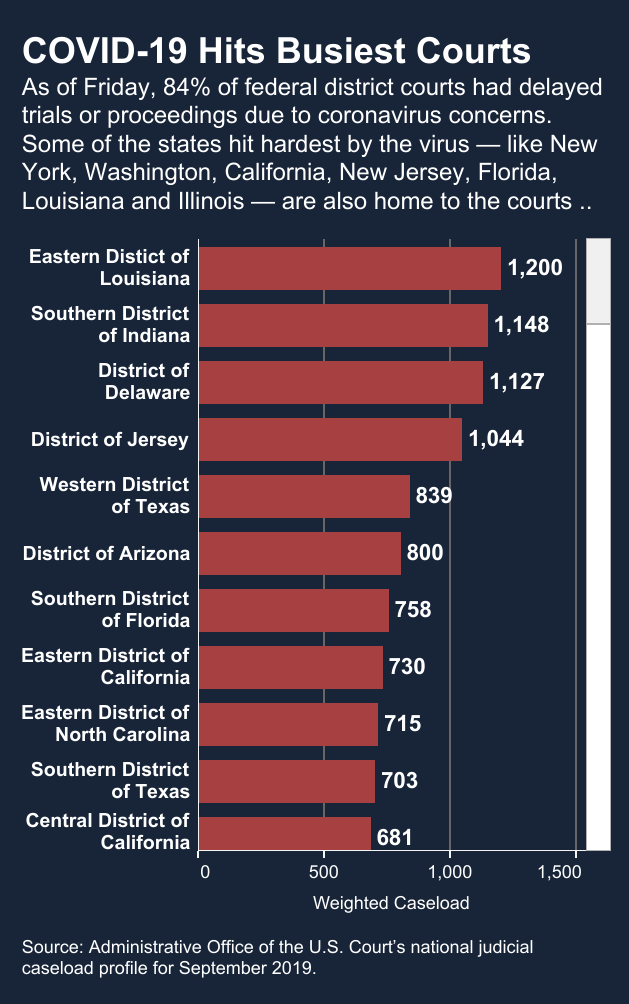 The federal judiciary regularly analyzes the docket of each district for complexity. The result is then divided by the number of judgeships allotted to the district, yielding "weighted caseloads."

And there are districts where empty seats on the bench have long sat empty. Those include New Jersey, where six of 17 judgeships are unfilled, California's Eastern District where 10 of 28 seats are empty, and Washington's Western District, where five of its seven seats are unfilled.

"You're injecting a very significant additional delay into court systems that in many places were already overburdened, and I don't think the impact will go away when the coronavirus wanes," he said. "This is a jolt to the system, and it's not likely to dissipate quickly."

Ordinarily, less burdened districts have loaned judges and resources to courts struggling to keep up with caseload. But there isn't a single district that hasn't been touched by coronavirus, according to U.S. District Judge Denise Page Booth, chief judge of the Eastern District of Michigan.

"This is just an extraordinary time," she told Law360. "I don't think we've had anything like this. When Hurricane Katrina hit, for example, we could move criminals to other jurisdictions. We don't have that. This is pervasive across our whole country."

Criminal caseloads have been somewhat insulated from this, thanks to the Speedy Trial Act of 1974, which sets deadlines for federal prosecutions. It ensures that defendants don't sit in jail indefinitely waiting for their day in court. 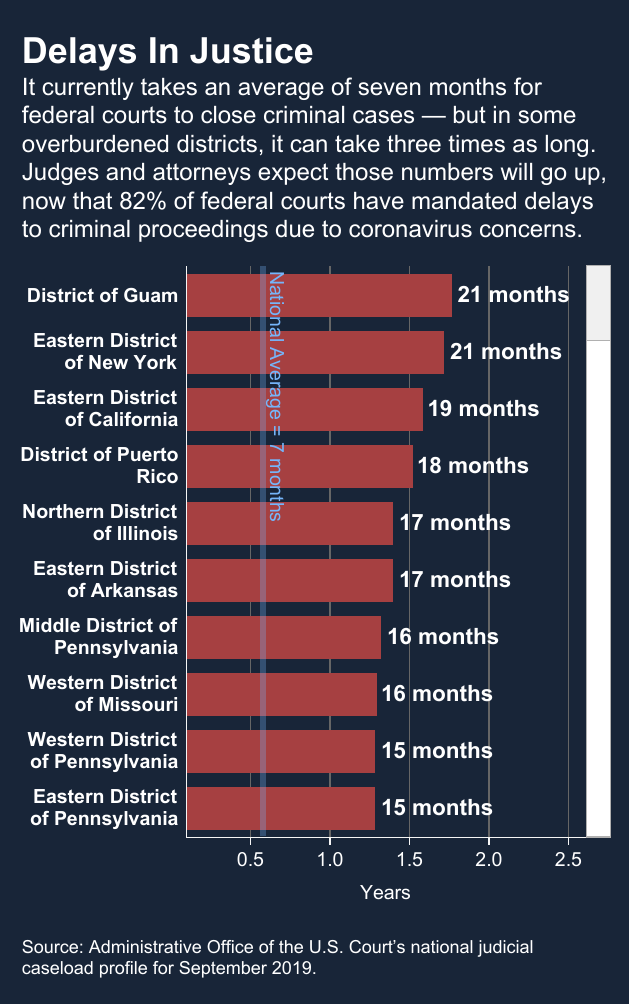 But that seems like an inevitability now, said Massachusetts Chief Judge F. Dennis Saylor. When he wrote a standing order postponing jury trials and limiting all nonemergency hearings last week, he "left the door ever-so ajar" so defendants could invoke that right.

"Even a simple empanelment of 12 jurors requires a larger pool of people, about 40 or 50," Judge Saylor told Law360. "I cannot imagine how many summonses we'd have to issue, how many people would be willing to serve, how many alternates we would need."

"It's easy to say everything will be postponed, but it's hard to know what to do about that person who is in jail awaiting trial," he added.

"The question is how long will this last," she said. "Even though under the Speedy Trial Act, whether a person is in custody or not is not a deciding factor, it's obviously important to us that our clients aren't held indefinitely awaiting trial when they are presumed innocent and they obviously have a big liberty interest at stake."

The Bureau of Prisons has made it very difficult for inmates to receive visitors, including legal counsel. But it's not just clients' trial rights that concern David Patton, federal public defender for the Southern District of New York — he also worries about the safety of defendants incarcerated in the Metropolitan Correctional Center in Manhattan and the Metropolitan Detention Center in Brooklyn.

"Unfortunately, the U.S. Attorney's Office has told us that it's business as usual, and they're continuing to bring their typical number of cases," he said.

Before the coronavirus, in both Massachusetts and New York's Southern District, felony cases took about a year on average to reach disposition — that's nearly twice the national average of seven months. But both Conrad and Patton said they didn't feel the courts were too slow before the disease hit.

Conrad noted that the national average might be skewed by immigration proceedings in border districts, where defendants are sometimes advised of their rights and plea en masse. She said she'd prefer to have the time to prepare a case thoroughly than have "a system where there is undue pressure to resolve cases quickly just for the sake of expediency."

"If a case is ready for trial now and we're just going to put it on hold for six months to a year, that's concerning," she said.

The civil docket has borne the brunt of the caseload crisis until now, because such litigation usually isn't subject to the same statutorily required speed as criminal cases. That shows no sign of abating. In some courts, like the Southern District of Texas, civil jury trials were postponed before criminal trials. 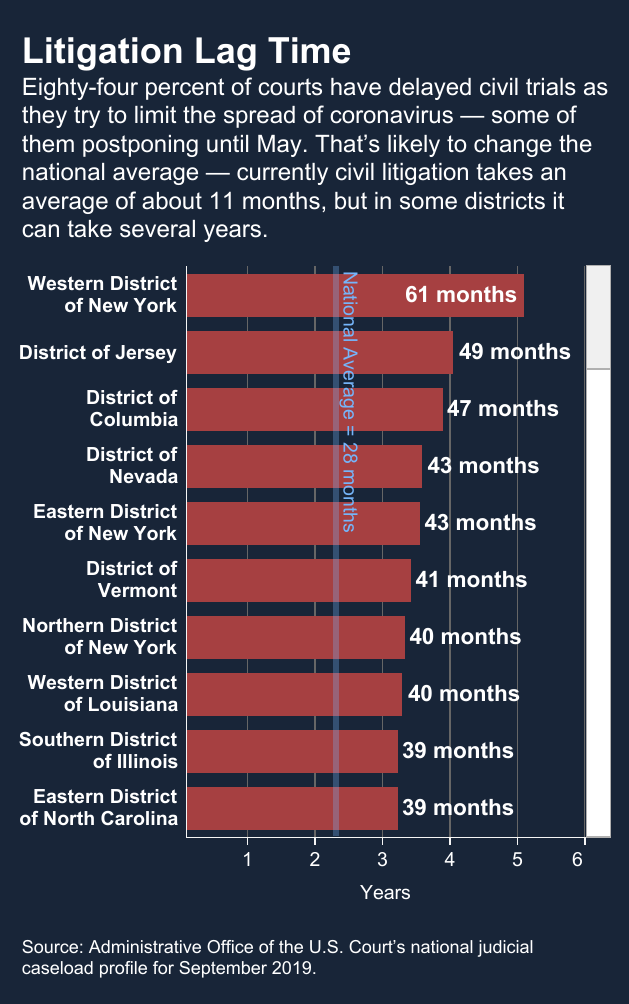 "That's exactly the kind of hearing that can be done remotely, with very little impact on the integrity of the hearing itself," he said.

"The backlog should be a limited one," she told Law360. "We in the Southern District of Texas all know the importance of prompt action when the current constraints relax and then lift."

"One of the things I'm concerned about in the back of my mind is, at some point, this will be over and we'll have to disentangle all of this," he said. "Everything's going to have to be back on the calendar. That's going to be a challenge."

Sandman hopes when the dust settles, needy federal courts will get the funding and additional judgeships they need. For now, his task force is trying to help district courts share best practices, since "a lot of the work being done is dispersed and siloed."

"I am optimistic that we will see a lot of cooperation and an outpouring of volunteerism," he said.