Law360 (March 26, 2020, 9:58 PM EDT) -- President Donald Trump on Thursday night indicated that he will soon loosen social distancing guidelines aimed at containing the coronavirus outbreak, a signal that coincided with the U.S. passing China to become the country with the most confirmed infections. 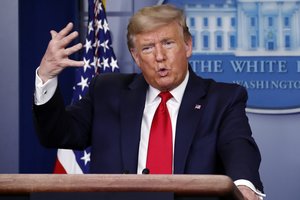 President Donald Trump discusses the coronavirus outbreak at a briefing in Washington, D.C., on Thursday. Trump again said he wanted to put the country "back to work." (AP)

Speaking at the White House's daily briefing on the novel coronavirus, Trump reiterated his desire to get major portions of the country "back to work" not long after a 15-day campaign of nationwide social distancing concludes on Tuesday.

"We may take large sections of our country that aren't so seriously affected, and we may do it that way," the president said Thursday. "But we've got to start the process pretty soon. So we'll be talking to you a little bit more about that next week."

New York, by far the hardest-hit state, on Thursday afternoon was approaching 40,000 infections, most of them in New York City and nearby counties. New Jersey, California, Florida, Illinois, Louisiana, Massachusetts, Michigan and Washington state have also dealt with large numbers of positive tests, and the Trump administration has fretted about the emergence of new hot spots. But many states still have patient tallies in the triple digits, and a handful of states haven't even confirmed 100 cases.

Trump's remarks came around the same time that the U.S. officially passed China — the original epicenter of the coronavirus pandemic — to have the most infections of any country. As of Thursday evening, the U.S. had about 84,000 cases, followed by China with 82,000, Italy with 81,000 and Spain with 58,000.

Italy has been steadily adding new cases and also appeared poised late Thursday to eclipse China, where new diagnoses have largely leveled off. But true apples-to-apples comparisons are somewhat difficult because of disparities in testing and transparency among different nations; Trump on Thursday seemed to suggest that China's numbers might not be reliable.

"I'm sure you're not able to tell what China is testing or not testing," the president said. "I think that's a little hard."

Deborah Birx, the White House coronavirus response coordinator, said at Thursday's briefing that results from 550,000 tests have been obtained in the U.S.

Testing volume, which was initially slow to ramp up, has advanced considerably during March. At Thursday's briefing, Vice President Mike Pence said that Abbott Laboratories is preparing to release a point-of-care test that will deliver results in doctors' offices within about 15 minutes. Company officials had no immediate comment.

Death rates from COVID-19, the disease caused by the novel coronavirus, have varied dramatically among countries, with the disparities perhaps stemming at least partly from the ages of affected populations and different approaches to assigning causes of death. The U.S. has had about 1,300 fatalities, China has reported 3,300, Italy has disclosed 8,200 and Spain has recorded 4,400, according to Johns Hopkins University.

The president in recent days has expressed a desire to allow large social gatherings and widespread business reopenings in much of the U.S. by Easter — a timeline that some researchers have said would be premature and risk hundreds of thousands of additional infections.

But Trump on Thursday implied that he may seek a middle ground between normalcy and the strict isolation currently being practiced broadly across the U.S.

"As soon as we open, that doesn't mean you're going to stop with the guidelines — you'll still try and distance yourself," Trump said, adding that distancing might not be "to the same extent, because you have to lead a life."

It's possible that governors could issue directives on social distancing that are stronger than forthcoming recommendations from Trump.

The White House on March 16 announced an initiative, dubbed "15 Days to Slow the Spread," that advised older Americans to stay home and also warned younger Americans that they could spread the disease. In the ensuing 10 days, the number of confirmed infections in the U.S. has skyrocketed from about 6,000 cases — a 14-fold increase.

Social distancing has delivered a devastating blow to the nation's economy, with more than 3 million Americans seeking unemployment benefits last week and Congress responding this week with a $2 trillion rescue package that is poised to become law.

Pence on Thursday said the White House will "listen to the very best health experts" before relaxing social distancing.

"The president's made it clear that, in his words, he wants to open the country up," the vice president said. "But we're going to do that responsibly."