Law360 (April 1, 2020, 1:47 PM EDT) -- Widening budget gaps opened by the coronavirus crisis are forcing European Union governments to consider jointly issued bonds as a way of filling deficits, a step that could mitigate the need for growth-hampering tax increases later on. 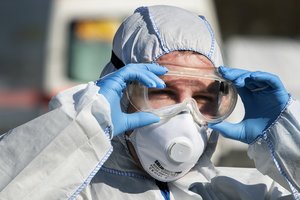 European governments face plunging tax receipts as consumption and incomes fall because of strict lockdowns and travel restrictions in response to the coronavirus pandemic. (AP)

A group of EU finance ministers known as the Eurogroup are due to discuss on April 7 how Europe's economy can steady government finances during the crisis and set the stage for a later recovery once the pandemic recedes.

Fiscal policy experts hope they will not repeat the mistakes following the financial crisis a decade ago, in which countries were forced to prioritize balancing their budgets, often with higher taxes, over promoting growth with more borrowing.

Today, with the novel coronavirus and its devastating economic impact, governments face plunging tax receipts as consumption and incomes fall because of strict lockdowns and travel restrictions. As taxes lose traction, common debt issuance that allows countries with high credit ratings to offset weaker borrowers could be the only answer to prevent another debt crisis.

"A 2011-2012 trajectory would be extremely damaging and could lead not only to a very uneven recovery, but countries having to raise value-added tax, cut back spending on nonhealth issues and raise other taxes," said Jacob Funk Kirkegaard, a senior fellow at the Peterson Institute for International Economics, a think tank in Washington, D.C.

Not wanting to relive the mistakes of the past, last week nine eurozone countries wrote to former Belgian Prime Minister Charles Michel — who is the president of the EU body, the Council, in which member states are represented — to call for a common debt instrument. Germany has yet to back the idea. The Netherlands remains a principal holdout, but is under pressure to fall in line.

Ensuring that countries in weaker fiscal health, such as Italy, can leverage the good fiscal health of a country like Germany could potentially offset the need for tougher austerity measures, such as raising value-added tax, down the road.

Mutualizing debt issuance among the 19 eurozone member states, which still issue government bonds independently, would set a major fiscal precedent. But that course might give Italy enough space to focus more on tax compliance, rather than needing to raise rates, at least with respect to value-added tax. The current standard VAT rate in Italy is 22%, above the EU's average of 21.3%, according to data from the Tax Foundation, a U.S.-based think tank.

Using VAT increases to make up for holes in the budget was a common move during the last crisis. Research by University of Leeds tax professor Rita de la Feria showed that between 2008 and 2014, 23 out of 28 EU countries raised their VAT rates or broadened the base.

Tax rises accompanied recessions in much of Europe in the early part of the last decade. Following the financial crisis of 2008 and 2009, the economy of countries using the euro declined for a year and a half from late 2011 until early 2013 as countries tightened their belts.

"If you pursue budget consolidation in the immediate aftermath of a deep recession, you're going to prolong that recession," Kirkegaard said.

Tax compliance is a serious problem in Italy. The EU published a study last year that said that in absolute terms, the gap between expected value-added tax income and what the country actually receives is the highest in the EU, at about €33.6 billion in 2017 (now $36.7 billion). By some estimates, too, the informal economy is about one-fifth of the size of Italy's total economic output.

"I wouldn't assume an increase in the statutory rate as a way to raise revenue, but we probably have to assume measures to increase compliance," said Lorenzo Forni, of the consulting firm Prometeia.

Italy's fiscal situation will remain weak, even if generous European help is forthcoming. The country has one of the highest debt rates in the EU, with total debt at around 135% of gross domestic product. Under EU rules, countries are supposed to limit their debt to 60% of GDP.

Nicolò Bolla, an accountant in the Parma region of Italy, said that though he would appreciate "free money" from the EU, even with its assistance, the fiscal situation of the country was bad.

"It's not going to look good anytime soon," Bolla said.

Even if there is a compelling argument that a country like Italy could benefit from European fiscal assistance, there's no guarantee that a true sharing of liabilities will happen, as it goes against one of the fundamental maxims of the economic bloc: Countries don't bail each other out. Some countries vehemently object to changing this principle, concerned it could lead to further fiscal policy consolidation, such as shared budgets and common tax codes, or fuel populism in their own countries.

And there are other European resources to combat the crisis.

Amid the debt crisis a decade ago, European leaders set up an emergency bailout fund that raises funds on the market for countries facing a loss of access to market financing. This fund, now known as the European Stability Mechanism, or ESM, makes these loans in return for countries agreeing to consolidate their budgets, known as conditionality.

At that time, the European Central Bank also broke its taboo and agreed to buy the bonds of eurozone countries in distress. Since then it has drastically expanded its bond-buying program and recently announced a €750 billion bond purchase program through at least the end of the year.

The EU also has at its disposal the European Investment Bank, a Luxembourg-based institution owned by EU states. The EIB generally makes loans to support EU policy goals, such as bridging differences between member states and mitigating climate change.

Given continued resistance, it's unlikely that finance ministers next week will agree on something as revolutionary as Eurobonds, or even a loan via the ESM without conditions.

"It's likely that the emergency in Italy will subside and therefore the need for common action might be felt less urgently than it is now," Forni said.

"I expect something from Eurogroup, but I doubt it will be a game changer," he said, adding that consensus would be limited to assistance via the ESM.

Still, even if the European assistance is less courageous than some would like, leaders of other EU countries might not want to be seen forcing Italy to tighten its belt, or raise taxes, too much.

A repeat of the moralistic finger-pointing that took place in the debt crisis a decade ago could further strengthen anti-EU forces in Italy, which already feel emboldened due to a perceived lack of solidarity from the EU in the face of the coronavirus crisis. For example, Matteo Salvini, the leader of the populist Lega party, who was until last summer a deputy prime minister, has suggested that Italy should leave the EU after the crisis.

Yet, on the flip side, the Netherlands and Germany have populist movements they need to consider as well. Erik Jones, an Italy-based professor of European studies at Johns Hopkins University, said: "If you are soft on Italy, you are fueling populism in those northern countries. That is the dilemma."