Law360 (April 2, 2020, 4:10 PM EDT) -- Walden Macht & Haran LLP managing partner Jim Walden has taken on some intimidating foes during his 27-year career as a federal prosecutor and litigator in New York, and now he can say he has beaten illness as well after a grueling bout with a presumed case of COVID-19. 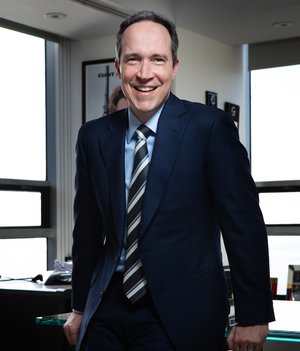 Walden Macht & Haran LLP managing partner Jim Walden spent more than a week battling what doctors believe was COVID-19. "It's very, very difficult to do anything other than lay in bed," he said.

Three weeks ago, the 40 attorneys and 17 staff at New York City-based Walden Macht began working from home in response to the spread of the novel coronavirus, and Walden headed to his weekend cabin in Connecticut with his wife and three teenage children to begin the process of social distancing.

But within a matter of days, his wife began to feel ill and by the next week Walden, 54, began to experience symptoms as well: fever, cough, body aches, chills.

"That weekend and over the course of the next eight days I had an incredible fever like I've never had in my life," Walden said.

With the nearest hospital 20 miles away and no tests for COVID-19 available in the area, he consulted doctors virtually and was later told there was no need to test because he "clearly had" COVID-19 based on his symptoms and the duration of his illness, Walden said.

He was instructed to monitor his symptoms and visit an emergency room if he began to cough up blood or had trouble breathing, he said.

During his nearly three-decade career in litigation, Walden has represented numerous high-profile clients like the governors of New York and New Jersey and Russian doping whistleblower Dr. Grigory Rodchenkov. He also took on some notorious criminals during his time as a federal prosecutor in New York, such as the bosses, captains and soldiers of the Bonanno, Colombo, Gambino, Genovese and Lucchese crime families.

The tough litigator said the symptoms he experienced were no joke.

"It got really rough," he said.

His symptoms presented as a severe flu, with a fever that broke after a little over a week, a period during which he got "very little" sleep and experienced extreme fatigue, he said. Neither he nor his wife have any underlying health issues.

He said he continued to speak with clients and manage the firm even as he was fighting off his illness, talking on the phone for 45 minutes and then spending four hours utterly exhausted and recovering from the effort.

"It's very, very difficult to do anything other than lay in bed," he said.

Soon after his symptoms began to appear, Walden's firm filed a big lawsuit in New York state court that required a "tremendous amount of work," he said. He says he joined together with a team of eight colleagues, all working remotely, to put together the 30-page complaint.

Walden says his law firm has been able to adapt to remote work fairly easily as it had a flexible policy on working from home before the virus hit, with one associate working completely remotely from Buffalo, New York, for the past three years.

He also anticipates weathering the financial impact of the pandemic without any layoffs or pay cuts, Walden said.

He explained that while the firm is seeing a slowdown in litigation with New York's courts largely grinding to a halt, its attorneys have work outside of litigation that is keeping them busy.

And, he said, the firm has long operated in a fiscally conservative manner, not taking on debt and not distributing too much revenue to partners, so it has accumulated a "very healthy cash cushion" as an emergency reserve.

"We have wonderful attorneys and a wonderful back office and the last thing I can ever imagine doing, or needing to do, is lay off or furlough or cut salaries or anything like that," he said. "We intend to support our people 100% through this, and we'll be financially able to do that."

Walden and his wife are now feeling well, Walden said. His symptoms broke on Tuesday, and none of their children has experienced any symptoms. They are now finishing out their quarantine period in Connecticut.