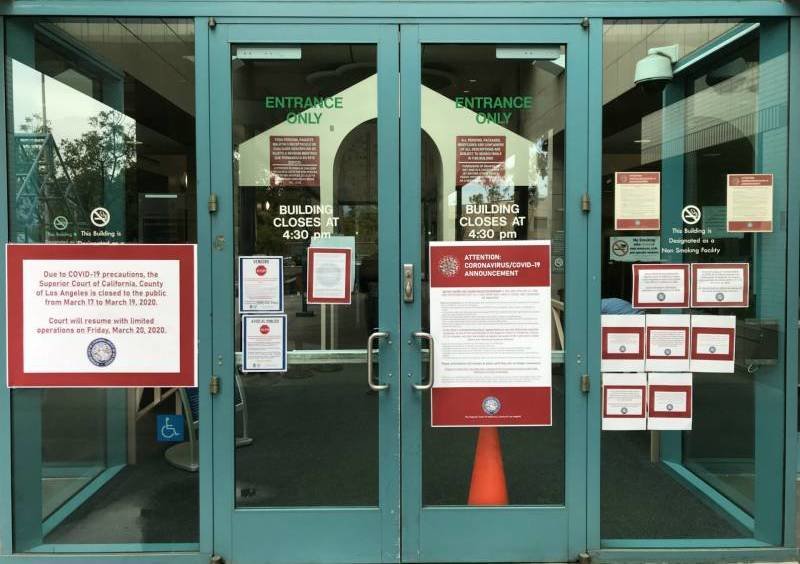 State courts in Los Angeles closed down for three days last month, but some attorneys say they still aren't taking proper safety precautions. That's created some unusual allies, as unions for public defenders and prosecutors joined together to call for another court shutdown. (Photo courtesy of Dennis Smeal)


Nikhil Ramnaney felt Los Angeles courthouses hadn't done enough to protect attorneys and their clients from the spread of the coronavirus. So the self-professed "bleeding-heart" assistant public defender did something unusual — he called up a prosecutor to commiserate.

Ramnaney, who serves as the L.A. public defender union's president, found a receptive audience in a lawyer who would normally be an adversary — Michele Hanisee, president of the Association of Deputy District Attorneys.

"We agreed that if we teamed up, it couldn't be chalked up to one labor union complaining," Ramnaney said. "It would make a much more powerful statement to the bench but also to the public about the severity of conditions."

Presiding Judge Kevin Brazile didn't cede to their request for a courthouse shutdown, but Ramnaney said he's seen "slow improvements" in some of L.A.'s 38 court facilities since he and Hanisee complained about conditions that they said put everyone at risk.

They said courthouse elevators were full. Defendants kept in overcrowded jails were transported to even more packed holding cells — sometimes only to be told their cases had been delayed. There were rumors that the criminal calendar would be jammed into fewer dockets. In courtroom galleries, and even the line to get into court buildings, people weren't keeping six feet apart, as the Centers for Disease Control and Prevention recommend.

"We were all hearing about the orders from the governor and the CDC and observing these precautions being completely ignored in the courts," Hanisee said. "And courts are already a petri dish."

So she welcomed Ramnaney's call.

Such unlikely detentes have been forged all over the country, as COVID-19, the disease caused by the novel coronavirus, continues to spread.

Last week, the district attorney and public defender in Nashville, Tennessee, agreed to seek early release for about 80 prisoners. In Allegheny County, Pennsylvania, more than 500 inmates were released, thanks to a collaborative effort that included both public defenders and prosecutors.

An estimated 1,000 New Jersey county jail inmates were approved for release after a mediation between local prosecutors, public defenders, the state attorney general's office, and the American Civil Liberties Union. In Alameda County, California, home to the city of Oakland, prosecutors and defense attorneys have collaborated to get early release nearly 250 at-risk inmates from the Santa Rita Jail.

It's rare for public defenders and district attorneys to agree on policy. But Stanford Law School professor Robert Weisberg expects to see more of these alliances.

"It's going to catch on. We're going to see it everywhere," he told Law360. "This will be not only common, it will probably become the norm around the country for a while."

In L.A., the two attorneys' unions warned that the courts' social distancing measures "fell short" in a March 21 letter to Judge Brazile. The unions sought "a temporary shutdown of the courts," during which court officials could meet with public health authorities, elected leaders and union representatives.

The letter's request for a shutdown of the courts included two carveouts — one for hearings that could lead to the release of vulnerable prisoners, and one for "urgent public safety matters."

Those exceptions required compromise. Ramnaney said he didn't agree with the district attorneys' public safety concerns. And Hanisee said her side couldn't get behind public defenders' proposal to put parole requirements on hold — a request that didn't make it into their joint letter, but that public defenders have championed elsewhere.

Hanisee understood the public health motive of not forcing people to check in with their parole officers in person, but she said her union wanted to focus on risks to attorneys, and wasn't willing to support that policy issue.

"[Those defendants] are on probation for a reason, and especially in domestic violence cases, it creates a real public safety risk," she said.

But the prosecutors were on board for requesting that immunocompromised and elderly prisoners be released. Their boss, Los Angeles County District Attorney Jackie Lacey, was already working the public defender's office to review the cases of thousands of inmates for possible release.

"In a 12-by-10 cell, how are you social distancing with three other people?" Ramnaney said. "A lot of these people are in for petty theft and low-level felonies. They shouldn't be sentenced to die because of the conditions in the jail."

Ramnaney was heartened by prosecutors' willingness to include release hearings as an exemption to their letter's request for a court shutdown.

"It gave me a lot of hope for working together in the future," Ramnaney said, adding that the two unions may coordinate future contract negotiations with the state. "Because of the nature of this pandemic, we're now strange bedfellows. We could easily infect each other."

But Weisberg cautioned that public defenders and district attorneys shouldn't get too cozy.

Prosecutors and defense attorneys make deals all the time, but plea bargains have to do with the interests of an individual client. By coming to a wholesale agreement about what cases won't move forward, Weisberg said, "some individual is being sacrificed."

"The argument is that this benefits the greater good. The only good for a defense lawyer is the individual rights of the client," he said. "But extraordinary situations call for some compromise."

Some defendants' constitutional right to a speedy trial was already waived when California Supreme Court Chief Justice Tani Cantil-Sakauye issued a statewide order on March 23 that suspended jury trials for 60 days. That took some of these decisions out of the hands of defense attorneys, Weisberg said.

But, he added, only about 5% of criminal cases go to trial.

"That means pretrial motions are the trial, for most people," he said. By asking the presiding judge to only consider requests for release, cases with upcoming hearings are "slowed down."

But if attorneys are scared every time they enter the courthouse, Ramnaney said, some clients may be better served holding off on dispositive hearings.

"There continues to be this discussion about how to balance the rights of the accused and ensure access to justice," he said. "But when everyone coming into the courthouse is afraid for their safety, what level of competent advocacy are you really getting?"

Ramnaney had hoped the court would ease those fears on March 17, when Judge Brazile closed L.A. Superior Courts for a three-day "holiday," creating a statutory deadline extension.

During that hiatus, the courts posted signs with COVID-19 advisories, and developed pilot programs for video appearances and policies the early release of inmates, Judge Brazile told Law360 in an email. He also closed three courthouses and reduced the number of operational courtrooms in the county from 600 to 225.

Judge Brazile's order also outlined 31 types of "essential" court proceedings that would soldier on despite the pandemic, ranging from traffic arraignments to criminal trials. A day before the courts reopened, he revised the standing order, cutting some family law, eviction and traffic proceedings from the list.

"With less cases need[ing] to be called, less people are coming into our courthouses. This means the court is able to safely reduce the number of courtrooms for operational needs," he said. "This allows individuals in courthouses to properly engage in socially distancing."

But when the courts reopened on March 20, hundreds of people continued to be exposed to "unsafe and unsanitary conditions," according to the March 21 letter from the prosecutors' and public defenders' unions.

Clerk of Court Sherri Carter responded on March 23 with a letter noting the court had put up signage urging social distancing and implemented a twice-daily cleaning regime. A few days later, she sent a letter to the district attorney and public defender, detailing the court's coronavirus response and letting them know it was working to allow for video appearances.

"It has come to my attention that some of your lawyers question the level of cleaning the court has done," she wrote. "If your employees remain uncomfortable with the twice-daily deep cleaning, they are welcome to use any additional precautions."

Hanisee said she was particularly disappointed in Carter's letters, because she would go into the courthouse and see that they weren't accurate. For example, Carter claimed that court officers had been provided sanitary wipes so they could clean the X-ray trays at security.

"I asked the court security officers about it, and they immediately laughed. There was nothing," she said. "I'd walk into a courtroom and there were 30, 40 people sitting there. It was disappointing that she said things were happening that were so observably not happening."

But, Hanisee added, at the end of last week, she noticed a difference.

Clorox wipes were available. Social distancing was being practiced. Doors were propped open, so people didn't have to touch the knobs.

Judge Brazile said that security officers intervene when too many people enter a courtroom or an elevator, per his orders.

In addition, the court recently started allowing for attorneys to appear in court without their clients, according to Hanisee. Fewer defendants are being brought in, she said, and the public is now almost completely excluded from the courthouse.

"It looked like things were safe and under control," she said. "I guess we'll never know whether this would happen eventually or if it's because we put pressure on them."