Dive deep with Law360 Pulse to see what top legal executives have to say about technology in the industry.
Take a closer look at the Law360 Pulse Technology Report, out NOW!

Can Law Enforcement Handle Scofflaws Amid A Pandemic? 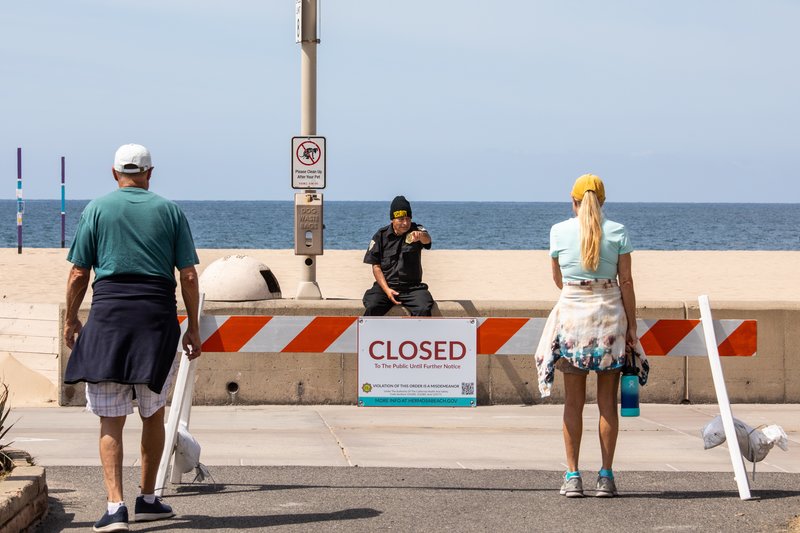 Most people around the country have voluntarily complied with public health measures aimed at slowing the spread of COVID-19. But at a time when incarceration could be deadly, scofflaws pose a unique challenge. (Getty)


To prevent the spread of the deadly coronavirus that's killed more than 20,000 Americans, at least 316 million people across the country have been urged — and in some cases, ordered — to stay home.


While most have voluntarily complied in an effort to protect themselves and others from COVID-19, scofflaws put police in a pickle: How do you enforce public health directives at a time when jails and prisons incubate the very disease you're trying to suppress?

"There's the dilemma — you don't want to put anyone in prison," said Judge Nancy Gertner, a professor at Harvard Law School. "Detention facilities are petri dishes. You send someone to jail, it could be a death sentence."

Jail as capital punishment is no hyperbole: Cook County Jail in Illinois is the hardest-hit per-capita COVID-19 site in the country, with more than 350 cases and at least two inmate deaths. Rikers Island in New York City has had over 700 cases between inmates, staff and health care workers, including seven jail employee deaths and two inmate deaths.

Law enforcement has generally agreed that incarceration should be a last resort. During an April 9 webinar hosted by the Council on Criminal Justice, Benjamin Tucker, first deputy commissioner of the New York City Police Department, said "voluntary compliance is at the top of the list."

"The last thing you want to do is engage in enforcement activities," he said. "There's no way you can enforce your way out of this. You have to hit home with this notion that social distancing is a huge part of the solution to the virus." 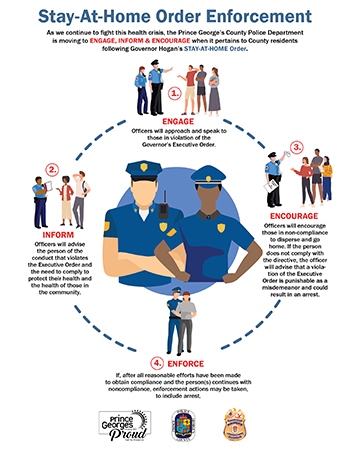 The Prince George Police Department published this infographic detailing its public safety protocol during the pandemic.
Click here for a full-size version.

In Prince George's County, Maryland, for example, police have released an infographic detailing protocols for enforcing the local stay-at-home order. Officers have been instructed to inform and educate and only issue citations or make arrests if all else fails. In Seattle, Police Chief Carmen Best noted that part of the restraint comes from the fact that jails are not taking as many people."

"They're having to practice social distancing and a little more guidance on who can go in and out of jail," she said during the CCJ webinar. "Even if we could do it, the facilities and the ability to do so doesn't exist."

Still, as weeks of isolation stretch into increasingly balmy spring months, stories of people being incarcerated for refusing to stay apart or stay inside have begun to trickle in from around the country.

On March 31, a man in Indiana was stopped for driving without a license and subsequently jailed for violating that state's stay-home order. Four days earlier, a woman in New York spent 36 hours in jail after being arrested for not social distancing.

More recently, police arrested a woman in Georgia who refused orders to self-isolate after being exposed to COVID-19. According to a spokesperson at the Haralson County Sheriff's Office, she was booked on April 7 for "criminal trespassing" and is being detained in a camper trailer behind the jail.

"Due to the fact that she has been directly exposed to COVID-19, we are unable to house her in our jail because we cannot expose other inmates to this virus," the office said in a Facebook post. "Hopefully we will be able to detain her through the completion of her quarantine period."

Some law enforcement agencies have made arrests without incarcerating the offenders.

In a March 28 encounter captured on video, police approached a group of men praying outside a Greensboro, North Carolina, abortion clinic and urged them to return to the safety of their vehicles.

When they refused, the officers cited them for traveling for nonessential activities and arrested them for resisting, delaying and obstructing police. Ron Glenn, the Greensboro Police Department public information officer, told Law360 that the group was not taken to jail but rather to a magistrate judge, who issued written orders to appear in court at a later date.

"Our goal is go out, get them to voluntarily comply and if they do so there won't be any charges or citations related to it," he said. "We haven't had very many instances like this at all."

While incarcerative measures make headlines in local media, the more widespread use of fines and citations is also raising concerns among some advocates.

Residents of Laredo, Texas, can face fines of up to $1,000 for being in public without wearing a mask, and authorities in Washington, D.C., are authorized to levy $5,000 fines on violators of the capital's stay-at-home order. Last week, New York Gov. Andrew Cuomo raised the fine for social distancing violators from $500 to $1,000 as "my way of saying this is serious."

Another COVID-19 law enforcement tactic has been to stack charges, as happened to a man accused of petty misdemeanor theft in Keaau, Hawaii. The crime normally carries up to 30 days of jail time or a fine of up to $1,000, but because it occurred amid an emergency proclamation, prosecutors enhanced the charges to felony status: The man now faces up to 10 years in prison and up to $25,000 in fines, all over a car battery valued at $250.

Betsy Pearl, associate director of criminal justice reform at the Center for American Progress, said it's hard to track how often such stacking is occurring, but anecdotal reports in other states have shown that the Hawaii case is not a unique outlier.

"There are jurisdictions using stay-at-home orders as a prosecutorial tool instead of a public safety tool," she noted. "People are facing significantly longer sentences for behavior that, a month ago, wouldn't have carried that kind of weight."

A major overarching concern about all criminal justice responses to COVID-19 is equitable enforcement, according to Maaike de Langen, the head of research for the Pathfinders for Peaceful, Just and Inclusive Societies' Task Force on Justice.

The group, which focuses on advancing the United Nations' agenda for peace and justice around the world, released its "Justice in a Pandemic" report last week, noting how marginalized communities face the highest risks of abuse amidst the effort to ensure public safety.

De Langen said the quality and culture of policing is very important now and in the coming months.

"We want enforcement, not repression," she added. "The risk is that some of the existing problems between communities and police are exacerbated."