By Joshua Rosenberg
Law360 is providing free access to its coronavirus coverage to make sure all members of the legal community have accurate information in this time of uncertainty and change. Use the form below to sign up for any of our weekly newsletters. Signing up for any of our section newsletters will opt you in to the weekly Coronavirus briefing. 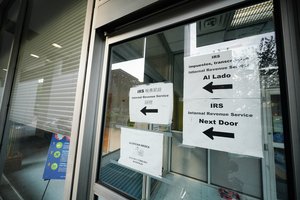 After years of funding cuts, the IRS has struggled to replace retiring Appeals officers, many of whom have considerable experience serving in other parts of the agency. (Getty)

Successfully working cases before the Internal Revenue Service's Independent Office of Appeals depends particularly on the relationship between the tax practitioner and Appeals officers. That rapport can be difficult to maintain when all meetings are conducted over the phone or via teleconference while IRS employees are under a work-at-home order.

And although the appeals division historically has run one of the agency's most popular and successful programs, its officers have already had to contend with large case backlogs. This, combined with the fact that officers lack the direction to turn petitions away, has placed the unit under considerably more strain.

With the pandemic shuttering offices across the country and forcing IRS employees and private attorneys alike to recalibrate how they operate, some lawyers fear they won't get the same quality attention they're accustomed to receiving from the division.

"My concern is, is that as we move into this new situation with the virus and there's an emphasis on trying to keep moving cases without having any in-person meetings" that cases won't get the attention they deserve, Bryan Skarlatos, partner at Kostelanetz & Fink LLP, told Law360.

Appeals officers are charged with conducting a fair evaluation of disputes between the IRS and taxpayers in the hopes of avoiding litigation. Controversy attorneys and Appeals officers have, in many instances, developed a rapport with one another and reached resolutions that don't involve resorting to the courts, which has historically made the program one of the agency's most popular.

But Appeals officers also tend to possess large caseloads, which can lead to increased pressure. That's partly because the IRS has lost $3 billion in annual funding and eliminated 13,000 positions, or 14% of its workforce, since 2010. It's also partly because Appeals officers generally can't exercise discretion in terms of turning down cases.

According to the Taxpayer First Act

, which Congress passed in 2019, all taxpayers are generally eligible to appeal an adverse decision from the agency. While the IRS does have the power to bypass Appeals and head directly to litigation, that happens in only a select number of cases.

Under reduced funding, the agency has struggled to replace retiring Appeals officers, many of whom previously spent considerable amounts of time serving in other parts of the agency. The IRS itself estimates that 31% of its employees will retire within the next five years, for instance.

That's all to say that Appeals already faces tremendous challenges in executing its mission, and the coronavirus pandemic, which has led the agency to temporarily shutter offices across the country, is set to exacerbate those difficulties.

For instance, Appeals officers may lack printers, scanners and copiers at their homes, which could prevent them from effectively coordinating with colleagues and petitioners, Frank Agostino of Agostino & Associates PC said.

And while many Appeals employees are accustomed to working from home, given the flexible schedule IRS employees can earn over time, they may not have access to individuals' case files if they can't return to the office, he said.

Individuals have the right, under the Taxpayer First Act, to request copies of their case files before interfacing with the appeals division. If employees can't access those files, it could potentially stop the process in its tracks.

Another temporary casualty of the coronavirus pandemic is likely to be an IRS pilot program that gives Appeals the power to invite examination and counsel representatives to take part in the appeals process.

The pilot program was designed to help Appeals identify, narrow and resolve factual or legal differences in some of the more complicated cases it receives. IRS compliance employees, who work to determine whether taxpayers owe money, are not present during settlement discussions that take place after the Appeals conferences, the agency said. Outside the pilot program, conferences merely involve individuals or businesses and their assigned Appeals officers.

The same technological and clerical hurdles impacting the division's other operations are likely to negatively affect the pilot program as well, Agostino said.

One technological hurdle is the IRS' videoconferencing software, Agostino said. While it may be useful for one-on-one meetings, it often becomes unwieldy when trying to support multiple users at once, he said. And since individuals who are assigned to the pilot program can't opt out and attempt to resolve their disputes solely with Appeals officers, those cases are likely to stall or reach a standstill if the agency's software fails.

Additionally, tax controversy attorneys are now contending with representing clients before the appeals office without the benefit of face-to-face interactions with officers.

For those accustomed to having face-to-face meetings with Appeals employees, such as representatives of corporations and wealthier individuals, the sudden change is most unwelcome, Skarlatos said.

While trying to evaluate nuanced cases with large files remotely is not impossible, it is certainly less ideal than holding face-to-face interactions, he said.

"In-person meetings are important," he said. "I don't know that a phone conference, or even a videoconference, is going to serve most taxpayers."

Attorneys involved in lower-tiered disputes that don't involve complex portions of the tax code or large case files may not be affected that much, according to T. Keith Fogg, law professor and director of the Federal Tax Clinic at Harvard Law School's Legal Services Center.

"For most of my clients, because they're low income, Appeals doesn't want to have a face-to-face conference to begin with," Fogg told Law360. "We don't normally push for one either. So it's not a big deal for us."

However, even for those representing lower-income clients, face-to-face interaction with Appeals officers can be indispensable, Agostino said.

"For a taxpayer who's down on his luck, there's no substitute for meeting with an Appeals officer and asking for help," he said. The office is "the heart and soul of the agency."