Homeless Angelenos Get Due Process Win Over City Seizures 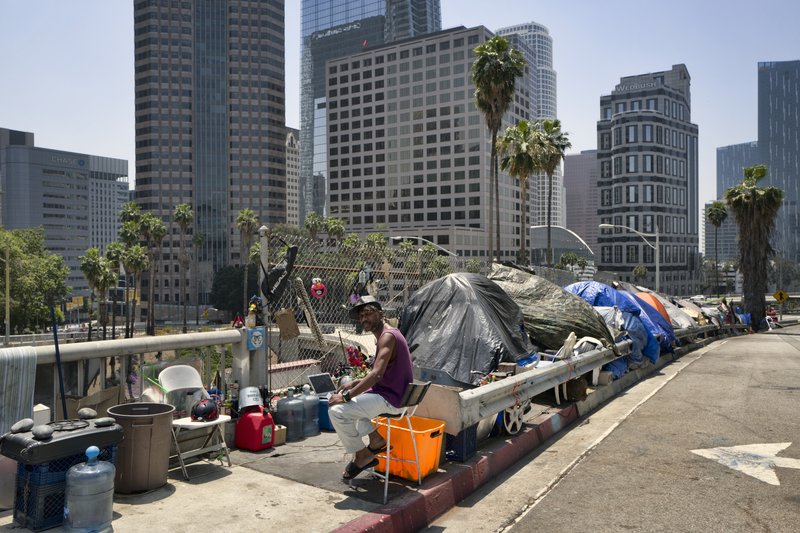 A judge this month ordered Los Angeles to stop enforcing an ordinance that allows the city to seize "bulky" items belonging to homeless people as a lawsuit on the issue continues. (AP)


In January 2019, Janet Garcia returned from getting ready for work to find that all of her belongings had been seized and destroyed by the Los Angeles Bureau of Sanitation.

Garcia, who had been without permanent housing since 2017, lost the tent where she slept near a subway station in the Van Nuys neighborhood and the cleaning supplies she needed for work, due to a Los Angeles city ordinance that allowed the city to seize items belonging to homeless people that were deemed bulky.

This month, however, a California federal judge overseeing a case filed by Garcia and other people without housing in LA ordered the city of Los Angeles to stop enforcing the ordinance, saying that it was likely unconstitutional.

U.S. District Judge Dale S. Fischer agreed on April 13 that the city should stop its practice of seizing and destroying "bulky" items while the legal challenge played out in court, saying that advocates for unhoused people in LA were very likely to prevail in the case.

The judge reached that conclusion in part because the city ordinance did not give people any ability to challenge or appeal the seizures.

"Because the bulky item provision permits the city to remove and permanently destroy bulky items without any procedural safeguards whatever, plaintiffs are likely to succeed on the merits of their due process claim under both the 14th Amendment [which guarantees due process] and the California Constitution," Judge Fischer wrote in the order.

The current lawsuit is one of several suits that have been filed on behalf of homeless people in Los Angeles and other parts of Southern California, including one filed against the city in March accusing it of failing to provide adequate resources to people living without housing.

Homelessness in LA has been an increasing issue, with one 2019 report from the Los Angeles Homeless Services Authority estimating that there are over 36,000 unhoused people in the city, a 16% increase over the year before.

Though the city and county have invested in programs that attempt to address the issue, such as building more housing, the city has also implemented measures such as the "bulky items" ordinance that was passed in 2016. The law allows the Los Angeles Police Department and the Bureau of Sanitation to seize and destroy personal property of homeless people that is too large to fit into a 60-gallon container with the lid closed.

The law was an attempt by the city to eliminate trash and debris on sidewalks and public areas, but advocates argued that both in theory and in practice, it was a violation of people's rights, allowing police to take property without due process.

"Rather than investing in solutions like bathrooms, hand-washing stations, and trash cans, which would both meet the real and immediate public health needs of the city's thousands of unhoused residents, and in turn, would also address many residents' complaints, the city has responded instead by seizing and destroying homeless people's belongings," the lawsuit alleged.

The city responded by arguing that the ordinance was constitutional and that it only applied to large items stored in public places. The storage of these bulky items on sidewalks and public areas had a negative impact on others living in the neighborhood, and it was the city's duty to keep public spaces usable, it said.

"The Fourth Amendment cannot reasonably be interpreted to demand a warrant, or the specific and individualized justifications that plaintiffs advance, for seizures of items that, by their very nature, infringe on the rights of all others in using the public space," the city wrote.

Judge Fischer, however, wrote in her decision that these factors were not relevant to the question of whether the city could seize and destroy personal property without due process.

Shayla Myers, an attorney with the Legal Aid Foundation of Los Angeles, which represents Garcia and the other plaintiffs in the lawsuit, told Law360 that she was very pleased by the ruling, but stressed that the legal challenge to the law was not over.

Although lawsuits over the city's treatment of its unhoused residents were not new, she said, the ordinance at the heart of this case was particularly concerning.

"This provision is egregious because it provides no due process whatsoever," she said. "It allows the city to simply walk up to a person's belongings, throw those belongings away, and an unhoused person can never challenge this decision — that the item was bulky or that the city should be allowed to take it."

There was no system in place to even notify people that their belongings had been taken, she said. Under the law, even refusing to turn over an item deemed to be bulky could result in fines and misdemeanor charges, she added.

"That is a tactic that is used against unhoused people to criminalize their presence in public," she said. "The belongings that are being seized and thrown away are the types of things that they need to survive on the streets."

For instance, Garcia lost the tent she relied on for shelter; other people have lost the containers they need to keep their belongings dry and even the bedding they sleep on at night.

People don't forfeit their constitutional rights when they lose their housing, Myers said.

Counsel for the city did not respond to a request for comment.