By Matt Thompson
Law360 is providing free access to its coronavirus coverage to make sure all members of the legal community have accurate information in this time of uncertainty and change. Use the form below to sign up for any of our weekly newsletters. Signing up for any of our section newsletters will opt you in to the weekly Coronavirus briefing. 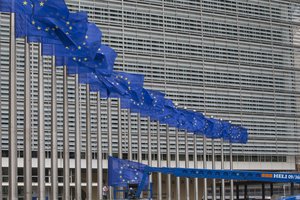 An impending anti-tax-avoidance directive from the European Union's executive arm has prompted appeals from industry groups asking that it be delayed in light of the novel coronavirus pandemic. (AP)

The groups cited the impact of the COVID-19 pandemic on the financial services sector, which they said has been severe and affected all aspects of the industry's operations. The requirement to report potentially abusive tax schemes should therefore be postponed until July 1, the groups said.

In a separate letter obtained by Law360, the European Banking Federation asked for a three-month suspension of the requirement to provide information on customer bank accounts to tax authorities in a standard format.

The consortium of lobbyists is taking aim at the European Commission's Directive on Administrative Cooperation, or DAC6, which requires taxpayers and their advisers to provide details of cross-border arrangements to tax authorities if they have features commonly seen in schemes to avoid or evade tax. The commission is the European Union's executive arm.

Under DAC6, one test for whether a tax arrangement must be disclosed depends on whether its "main benefit" is to gain a tax advantage. Taxpayers and their intermediaries are also required to report transactions that bear "hallmarks" of avoidance.

The European Banking Federation, one of the 10 groups seeking suspension of DAC6, wrote separately to both Pascal Saint-Amans, the Organization for Economic Cooperation and Development's tax chief, and Paolo Gentiloni, the European Commissioner for tax and the economy, asking for relief from an OECD reporting requirement placed into European law in December 2014.

EBF asked that the OECD's common reporting standard — the requirement to provide information to tax authorities in a standard format, known as DAC2 in the EU — be suspended for three months because those tasked with complying are facing technology constraints while working from home. The EBF note was not backed by the other nine members of the consortium and is a somewhat more controversial request given the amount of time it has been in place.

EBF said many financial institutions are operating with large numbers of staff working remotely with limited information technology support, which means it is not possible to effectively undertake the validation procedures and reviews of files originally planned.

The impact of the coronavirus pandemic on the financial services sector has been severe due to a reductions in the amount of staff available due to the various strict lockdown measures that have been introduced across the EU, according to the letters from both the industry groups and EBF. IT resources have been redeployed to support the unprecedented business continuity programs on a global scale, they said.

Dan Neidle, tax partner at Clifford Chance in London, told Law360 he believes suspending DAC6 would make sense. The legislation is still pending in many countries across the bloc, Neidle said, and is unlikely to make much progress given the current situation.

"The problem with DAC6 is that it goes well beyond the original idea of requiring tax avoidance schemes to be notified to tax authorities," Neidle said.

The legislation "catches a variety of entirely commercial transactions" and its exact scope is subject to local implementation across the EU, which makes it difficult to comply with, Neidle said.

The primary focus of the industry is to maintain its core client and regulatory responsibilities, the letter from the 10 groups said, something that reporting on possibly abusive tax avoidance schemes would detract from.

The DAC6 legislation already applies retroactively to June 25, 2018, so delaying the reporting date would not mean that the information was not provided — but would free up resources within financial institutions and tax authorities to deal with the pandemic, the letter said.

"It is a very bad idea for governments to delay the reporting requirements that can help identify large-scale corporate tax avoidance," she said.

Stopping corporate tax avoidance now is more vital than ever, Ryding said. Tax income is needed to finance health care, and "we need to make sure that public support for companies to tackle the crisis doesn't end up in tax havens," she said.

In the same vein, Alex Cobham, head of the Tax Justice Network, called the letter an embarrassing example of special pleading.

"You would have hoped that the finance sector had better things to do right now, but for some it seems there's always time to lobby against tax transparency," Cobham told Law360. "The finance sector should be prioritizing its ability to ensure governments have the necessary information on the financial holdings of their own residents."

A senior European Commission official, who requested anonymity, told Law360 the commission "understands the difficulties attached to the current circumstances ... but the fight against tax evasion remains a priority, alongside the fight against the coronavirus."

EU countries "will need all available resources to combat the consequences of the latter," the official said, adding the the commission would respond to the letter in due course.

Saint-Amans, to whom both letters were sent, said the OECD is looking into the issues raised and will respond to the business groups after consulting with member countries.

EBF didn't immediately respond to a request for comment.