Calculating Credit Spreads During A Pandemic

By Harold McClure
Law360 is providing free access to its coronavirus coverage to make sure all members of the legal community have accurate information in this time of uncertainty and change. Use the form below to sign up for any of our weekly newsletters. Signing up for any of our section newsletters will opt you in to the weekly Coronavirus briefing.


Law360 (April 27, 2020, 5:13 PM EDT) -- U.S. affiliates that rely on intercompany financing from foreign parents have to deal not only with the recently released Organization for Economic Cooperation and Development, or OECD, transfer pricing guidance on financial transactions but also a potential need for new debt from the fallout of the COVID-19 crisis.

If the affiliate incurs intercompany debt from a parent corporation in a high tax jurisdiction such as Germany, disagreements with respect to the arm's-length interest rate could lead to double taxation. This problem dates back over a generation in particular with intercompany financing from U.S. parents to Canadian affiliates.

The issues for evaluating what is an arm's-length interest rate may be daunting in light of recent litigations as well as the new 46-page guidance from the OECD. The key to understanding these issues is to begin with a clear understanding of the relevant intercompany loan contracts. The new guidance emphasizes the accurate delineation of the intercompany transaction and has an extensive discussion on the controversy with respect to evaluating the appropriate credit rating.

Justifying this implied credit spread is the more difficult and controversial issue. The GE Capital Canada[1] and Chevron Australia[2] litigations highlighted the controversy with respect to estimating credit ratings. But even if consensus can be reached on the appropriate credit rating for the borrowing affiliate, volatile periods such as the current one as well as other periods of heightened credit spreads highlight the need for reliable and timely market information on corporate bond spreads.

Credit ratings are letter grades, which require translating into a numerical credit spread. The fallout from the COVID-19 crisis includes volatile credit spreads almost reaching what we witnessed after the collapse of Lehman Brothers in the fall of 2008.

As an example, let's assume that a Germany-based multinational extended a 20-year fixed interest rate intercompany loan of $1 billion to its U.S. affiliate on March 18, and tentatively decided that the interest rate should be 5%.

On that date, the interest rate on 20-year U.S. government bonds was 1.6%. If the appropriate credit spread was 3.4%, then the tentative decision to set the intercompany interest rate at 5% was consistent with the arm's-length standard.

The precise date of the intercompany loan matters as interest rates were volatile during this period. Interest rates on government bonds on March 18 were also lower than they were at the beginning of the year.

This contract should also be clear on the currency of denomination, which in our example is the U.S dollar and not the euro. This matters as the interest rate on German government bonds has been negative for much of the recent period.

Could the IRS argue that this 5% rate is too high? Could the German tax authorities argue that it is too low? Any reliance on the U.S. Department of the Treasury regulations Section 1.482-2(a) applicable federal rate safe-haven is misplaced for reasons similar to those I noted in early 2009:[3]


Reliance on the applicable federal rate safe-haven of Section 1-482.2 of the Internal Revenue Code is not likely to address the need to comply with both U.S. transfer pricing regulations and the expectation of the foreign tax authority that the interest rate on the intercompany loan be consistent with market interest rates for comparable loans.

For March 2020, the applicable federal rate safe-haven range was from 1.9% to 2.5%. As we shall note, the market interest rate was likely well above 2.5%. Given that the German tax authority is not obligated to honor a U.S. safe-haven range, the multinational in the example must evaluate what represents a market rate and then defend it to both tax authorities.

While the Internal Revenue Service might be tempted to argue for a lower interest rate, the German tax authority would be tempted to argue for a higher interest rate. Even if a consensus is reached on the difficult issue with respect to the credit rating, being able to translate this letter grade credit rating into a numerical credit spread requires reliable and timely data on credit spreads.

I have described the intercompany contract noting that the arm's-length rate equals the sum of 1.6% and the appropriate credit spread. The OECD guidance provides an extensive discussion of the issues involving the determination of an appropriate credit rating.

Standard & Poor's and Moody's Investors Service provide what are essentially letter grades for their estimate of the credit rating, which is based on the probability that the company will default on its loan as well as the expected cost to the lender in the event of default. Let's assume that the example multinational has a compelling case that this credit rating is Standard & Poor's BBB, which is equivalent to Moody's Baa2 rating.

As we entered 2020, market evidence suggested that corporate bonds with credit ratings of BBB would have credit spreads near 1.7%. The example intercompany contract has an implied credit spread that is twice what we saw earlier in the year. Miguel Faria-e-Castro, Julian Kozlowski and Mahdi Ebsim note the recent spike in credit spreads:[4]


The ongoing COVID-19 pandemic has caused significant disruption in economic activity across the globe. Financial markets, in particular, have experienced surges in volatility that had not been seen since the 2007-2009 financial crisis. The figure below plots the median value for our measure of credit spreads (the difference between a corporate bond's yield and a benchmark interest rate on U.S. government securities) at the daily frequency, since the beginning of the year.

The figure highlights two important dates. The first one is Feb. 28, when stock markets experienced the largest single week declines since the 2008 financial crisis. While the median spread had been stable at around 100 basis points since the beginning of the year, it started rising around this date, as financial market turmoil became more evident. The second line corresponds to March 23, the day when the [U.S. Federal Reserve] announced a series of new measures to support the economy.

Their figures include credit spreads over this period for corporate bonds rated from BBB+ to BB- noting how spreads spiked during March 2020. While the IRS might view an implied credit spread equal to 3.4% as being above market rates, the German tax authorities could view it as too low in light of market conditions at the time of the intercompany loan.

We have witnessed spikes in credit spreads during other periods. My 2009 paper noted that while the credit spread for BBB rate bonds averaged 1.5% during the 1994 to 2008 period, this spread reached 5% by the end of 2008. Credit spreads were this high during the early years of the Great Depression and were somewhat elevated from 2000 to 2002.

Simon Gilchrist and Egon Zakrajšek published an informative paper on credit spreads and business cycles that provided their summary measure of credit spreads — the GZ credit spread, which was the average credit spread on senior unsecured bonds issued by nonfinancial firms.[5]

The authors focus on the very high credit spreads during the 2007-2009 credit crisis but their evidence also shows a more modest spike in credit spreads for the 2000 to 2002 period. The following figure simply takes the difference between long-term corporate bonds rated BBB and the 20-year government bond rate to capture the credit spread for this particular credit rating.

This figure notes both the dramatic rise in this credit spread after the bankruptcy of Lehman Brothers as well as the more modest rise in credit spreads for the 2000 to 2002 period, which witnessed not only the 2001 recession but also the bankruptcies of companies such as Enron Corp. and Worldcom. 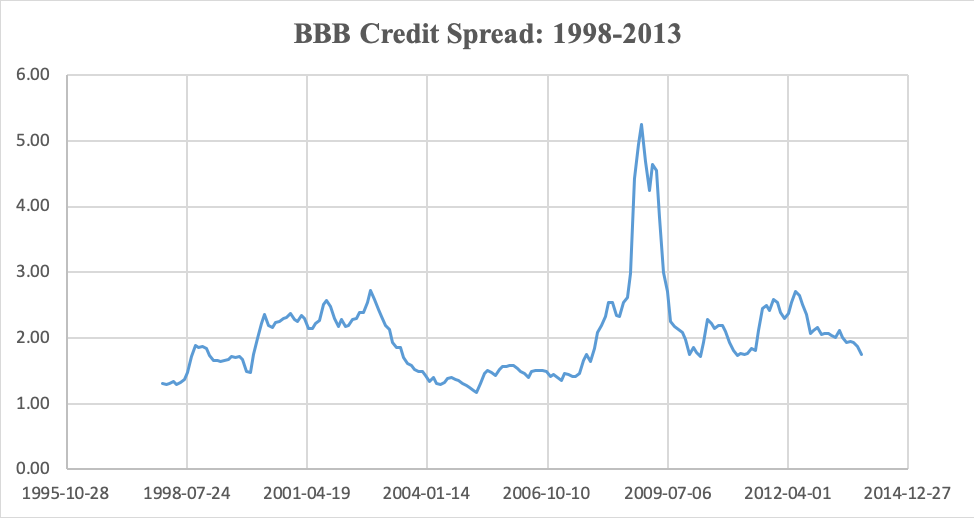 Burlington Resources Finance Co.[7] and Conoco both acquired Canadian oil fields with significant third-party debt with explicit guarantees extended to the lenders by the U.S. parent. Burlington's total borrowing from February 2001 to February 2002 was $3 billion, while Conoco's total borrowing in October 2001 was $3.5 billion.

In a paper on another Canadian intercompany financing litigation, I present the details for both of these issues.[8] A 0.5% guarantee fee leads to the all-in cost of borrowing exceeding the interest rate on the corresponding government bond by more than 2% for the debt incurred in late 2001. While the CRA appears to be willing to accept an estimated credit rating of BBB, it is asserting that the 0.5% guarantee fee is above the arm's length standard. Credit spreads, however, vary over time and were elevated during this period.

The new OECD guidelines discuss the various aspects of this issue in paragraphs 10.62 to 10.87, which included matters such as whether an affiliate should be seen as being granted implicit support for its financial obligations by the parent and whether intercompany debt should be seen as subordinated debt in the absence of formal covenants.

Credit spreads depend on the estimated credit rating but also the macroeconomic environment at the time of the intercompany loan. This illustration of the issues involved assumed that the credit rating for the related party borrower was BBB. During tranquil periods such as the 1990s or the period from 2003 to 2007, credit spreads for BBB-rated corporate debt tended to be near 1.5%.

Whether this will be only a tidal wave or another tsunami is not yet known. Given the heightened regulatory scrutiny of intercompany financing, multinationals with significant intercompany debt should carefully review whether their intercompany loan agreements are arm's length.

The opinions expressed are those of the author(s) and do not necessarily reflect the views of Portfolio Media Inc., or any of its affiliates. This article is for general information purposes and is not intended to be and should not be taken as legal advice.

[3] "The implications of the credit crunch for intercompany loans," International Tax Review, February 24, 2009.